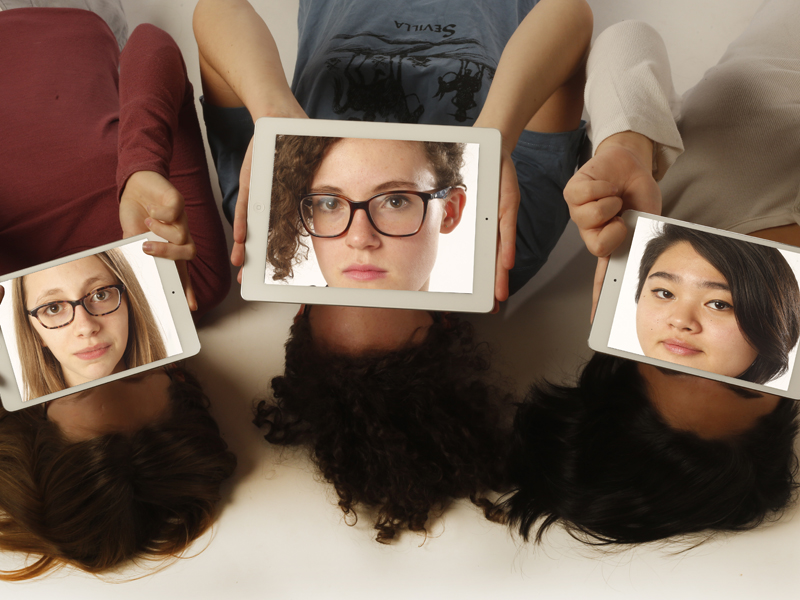 Arts Umbrella is thrilled to unveil the lineup of the 2018 Expressions Theatre Festival, running May 17 – 26, 2018 at the Waterfront Theatre. Showcasing the talented young artists in Arts Umbrella’s Intensive, Pre-Professional and Theatre Conservatory Programs, this annual festival boasts a bevy of captivating productions. From the whimsical family fun of Roald Dahl’s Charlie and the Chocolate Factory to the frontier hijinks of Rodgers & Hammerstein’s Oklahoma!, the audacious programming capitalizes on students’ exceptional range and skill. This year, audiences will be treated to an array of thought-provoking works, including a modern take on the classic Greek tragedy The Phoenician Women and the perceptive student-created original Outside In. Additionally, the Theatre Conservatory Program will be make their festival debut with a performance of Charles Way’s Missing, a riveting modern interpretation of the classic fairy tale Hansel and Gretel featuring Vancouverite and Arts Umbrella graduate, Douglas Ennenberg.

“The young and exceptionally talented assemblage of Expressions Theatre Festival students never fail to inspire with their courage, passion, and devotion to their craft. Their dauntless enthusiasm is contagious,” says Paul Moniz de Sá, Artistic Director of the Theatre & Music Program at Arts Umbrella. “We strive to provide an environment where students can take risks and express themselves freely while they hone their art. The skills they learn as they rehearse for and perform in this festival enriches their lives on and off the stage.”

While developing their presentations for this year’s Expressions Theatre Festival, Arts Umbrella students have the opportunity to collaborate closely with professional directors and designers. Before staging each festival production, the students perform their works in schools across the Lower Mainland, while learning the important operations involved in mounting and producing technically demanding works. This process allows students to experience the collaboration, creativity, and dedication that goes into a successful theatre production. For the 17-22 year olds who are preparing to audition for professional theatre schools in the Theatre Conservatory Program, the festival gives them a preview of the life of a professional actor.

Outside In
May 17 at 7pm and May 25 at 9pm
Cabins, campfires, games and a culminating gala make for an entertaining time as eight teens join a weeklong camp. However, sometimes reality flips and each character finds themselves weaving in and out of their own self-image. With the prevalence of social media focused on curating the ‘perfect image’ Outside In explores how self-image can play a role in how we feel about ourselves. Created and performed by the Arts Umbrella Laboratory Theatre Troupe, who learn the process of developing original works, this astute play will leave audiences contemplating their own self-image long after the final curtain call.

Oklahoma!
May 18 – 20 at 2pm and May 18, 20, 22, 23 & 26 at 7pm
Celebrating its 75th anniversary, Rodgers & Hammerstein’s first collaboration remains their most innovative, having set the standards and established the rules of musical theatre as we know it today. Join the Arts Umbrella Musical Theatre Troupe as they take audiences to the Western American frontier just after the turn of the century. A high-spirited rivalry between the local farmers and cowboys provides the colorful background against which Curly, a rugged cowboy, and Laurey, a charming farm girl, play out their love story. Although the road to true love never runs smooth, with these two headstrong romantics holding the reins, love’s journey is as bumpy as a surrey ride down a country road.

The Phoenician Women
May 17 & 19 at 9pm and May 24 at 7pm (Double Bill with Missing)
The Arts Umbrella Senior Theatre Troupe presents a modern take on Euripides’ classic Greek tragedy, The Phoenician Women. Using a blend of homemade masks to hide each actors gender and daring physicality, the Senior Theatre Troupe explores the repercussions of fate and the ever-present power of will, and delves into the consequences of war, control, innocence, and patriotism. Set in Thebes, the play is centred on the fateful history of the house of Laios following the tragic fall of Oedipus Rex. As the two sons of Oedipus battle over control of the city, the chorus of Phoenician Women find themselves trapped in Thebes by war on their way to Delphi.

Missing
May 24 at 7pm (Double Bill with The Phoenician Women)
A contemporary fairytale about two poor children surviving desperate circumstances through a rich mix of imaginative power, loyalty, and love. Inspired by true events and performed by Arts Umbrella’s Theatre Conservatory with special guest actor and Arts Umbrella graduate Douglas Ennenberg, currently starring in Little Mountain Lion Productions Mr. Burns, a Post-Electric Play, Charles Way’s Missing is a gripping take on the story of Hansel and Gretel as their dysfunctional family life spirals from bad to worse. In an ominous world of deceit and unknown dangers, Hansel desperately searches for his missing sister and uncovers disturbing clues that suggest things may not be what they seem. With a seemingly evil step-mother, who is content with letting the police handle things, it is up to Hansel to save his sister.

Theatre and Music Showcase, performed by Theatre Intensive Program students
May 26 at 11:30am & 4pm
One of the highlights of the season, the Theatre and Music Showcase reveals the accomplished and compelling talent of Arts Umbrella’s Theatre Intensive Program students through a kaleidoscope of short musical and theatre performances across a range of genres from improv to film.

Tickets are now on sale from $15 at artsumbrella.com/expressionstheatre

About Arts Umbrella (artsumbrella.com)
Art can change the lives of children in incredible ways, which is why Arts Umbrella helps young artists cultivate creativity and grow self-confidence through dance, theatre and visual arts. Since 1979, the not-for-profit has opened the doors for all kids ages 2 to 19 to find and explore their artistic voices. More than 20,000 students discover the magic each year – with more than half participating at little to no cost to their families.

About The Arts Umbrella Pre-Professional Program (artsumbrella.com/theatre)
The Arts Umbrella Pre-Professional Theatre Program consists of the Junior Troupe, Senior Troupe, Laboratory and Musical Theatre, Junior Musical Theatre Troupes Young Directors Program,and a Film Actors’ Clinic  The program is intended for youth who are ready for a larger commitment to the art and craft of theatrical and musical performance. Students work with industry professionals to develop the on and off-stage skills with an emphasis on teamwork, discipline, process, creative input and cooperation.

DIWALI IN B.C. TO TAKE PLACE OCTOBER 3 TO NOVEMBER 17