It is present day and a development company is threatening to create a massive shipping yard, demolishing Vanier Park; threatening the longstanding home of Bard on the Beach.  A group of Bard actors decides last minute to hijack their all-female performance of Hamlet and instead, stage a hilarious but poignant adaptation of Aristophanes play, Lysistrata.

Bard on the Beach is Western Canada’s largest Shakespeare festival.  It employs almost 300 people, including administrators, technicians and artisans along with the artists themselves.  Bard also has a strong volunteer community that supports the arts in Vancouver.  The festival encourages youth to attend shows with discounted or free tickets and holds education workshops for children and adults each year.  As you walk up to the Bard entrance, you can feel the excitement contained within.  Decorative tents house the theatres, the Bard sign prominent against the blue sky; an eclectic mix of patrons sip on wine, discussing various plays they might have seen in the past and what they are looking forward to that particular evening.  The decorative floral displays find themselves dispersed between benches, cocktail tables, and fancy shoes.

Lysistrata is performed in the Douglas Campbell Theatre on the Howard Family Stage, which is smaller than the main stage, but works well with the intimate and interactive nature of this particular play. It was opening night, and along with live theatre aficionados, friends and family filled the venue. The volunteers were personable, approachable and well versed in all of the presentations at Bard.  They truly love what they do and their passion for The Bard and theatre in general, is evident.

Lysistrata is a play written by Aristophanes set in 411 BC, about a woman living in the city of Athens, whose husband is away long term fighting in an endless war.  She gathers women from enemy states and explains to them that they must withhold sexual relations until peace is brokered.  They must tempt their husbands and lovers to expedite peace talks. This scenario proves challenging for all involved and hilarity ensues.  Co-adaptors, Lois Anderson and Jennifer Wise transpose this theatrical presentation onto a modern day crises in Vanier Park, which threatens to displace Bard on the Beach, just as the aboriginal people found themselves displaced from their village of Snauq many years ago.  These themes intertwine seamlessly, throughout the engaging performance.

Due to the change from Hamlet to Lysistrata being a spontaneous act, the set and costume designers, Drew Facey and Barbara Clayden had to be creative in their endeavors.  The concept then is to create their props and costumes from objects one might find at the Bard site.  Some examples include using water bottles and handbags to create traditional headdresses, or fashioning a crown and armour out of cutlery.  Other items include sharpie pens, toilet paper rolls, pool noodles, cardboard boxes and the final products are highly creative and entertaining. 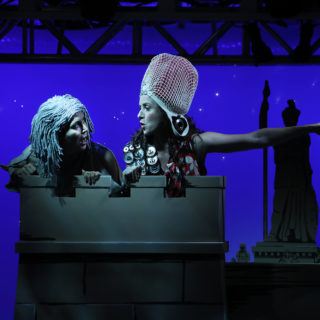 As Christopher Gaze, the founding artistic director of Bard on the Beach introduces the play; the cast begin to transform the set.  Hamlet’s famous podium and skull are replaced by cardboard cutouts of castles and hastily painted forests.  The cast explain that whereas Hamlet was incapable of action, Lysistrata was a strong woman leading the action and they needed to use this venue to educate the public about the dangers of the proposed development at Vanier Park.

The traditional territories are acknowledged as the play begins.  One cast member runs in to confess that she spray-painted “P.O.P” (People of the Park) on the development signs outside.  This leads to an impending arrest as police officers halt the Lysistrata play to take her into custody.  Using their influence, the women inform the police officers of their reasons, and persuade them to take a seat and watch the show.

Throughout the rest of the performance, the audience experiences the humourous dynamics of a marriage between one police officer and an actor in the play. They are encouraged to see how working together and discussing important issues is a better way to resolve conflict, while understanding that aboriginal peoples were at one time displaced and this should be acknowledged and remedied.  Lastly, they remind us about the importance of working with Mother Nature and sharing her resources rather than dividing them greedily.  If we plant these seeds now, they will grow and flourish in the future for generations to come.

Lystistrata is a unique and innovative Bard on the Beach theatrical performance.  It will most likely not be what you expect, but will entertain you, make you think, keep you laughing, and stay with you afterwards as you leave the theatre for a stroll in Vanier Park.  It is definitely worth the trip to see Lysistrata at Bard on the Beach this summer.  It is playing now through September 13th.

Bard on the Beach Timon of Athens – review by Anita Neufeld

Bard on the Beach – Macbeth – a review

Bard on the Beach presents Bold and Beautiful

2 thoughts on “Bard on the Beach – Lysistrata”