Sip and Savour presented by numpfer, returns for the third annual event to benefit BC Women’s Newborn ICU at North Vancouver’s Pipe Shop. numpfer founder, Sarah Robbins, continues to give back to BC Women’s Newborn ICU to express gratitude for the devoted care given to their daughter Charlotte, now 5, during her first days of life. After taking a year off to have baby number two, Sarah is back to pay it forward by staging the third annual “Sip and Savour” food and drink tasting event in support of BC Women’s NICU.

“We are thrilled to be back fundraising for BC Women’s through the support of our community,” says Robbins. “After having two beautiful girls, it’s clear that no two pregnancies or birth experiences are the same. Knowing there’s a place for advanced life saving care for women and babies when things don’t go according to plan is very comforting.”
Previous Sip and Savour’s events were very successful, raising over $90k to purchase both an incubator, and a phototherapy system for newborns suffering from jaundice. The generous support of individuals, businesses and non-profit foundations made this possible. The donation of time and resources including the venue, photography, photo booth, gifts, and food & drink all allow this special night to give a helping hand to brand new babies in need.
On Monday, November 19, more than 250 guests will join event host Tamara Taggart, along with numpfer, BC Women’s Hospital Foundation, and a host of local small businesses at the spectacular Pipe Shop in North Vancouver. Guests, sponsors and supporters will celebrate together with the goal of raising $50k to purchase a much-needed Maquet Servo-n neonatal ventilator.
For many premature and critically ill babies in the Neonatal ICU (NICU) respiratory support literally means the difference between life and death. The ventilator will replace obsolete respiratory equipment and meet increasing demands. BC Women’s can treat and care for babies born as early as 23 weeks GA. At this incredibly delicate stage of life, mechanical ventilation is a critical component of care – but can be hard on tiny lungs. The Maquet Servo-n has been carefully selected, after an exhaustive trial and testing process, as the ideal neonatal ventilator to meet the respiratory requirements of even the tiniest NICU patients. BC Women’s NICU leadership confirms that the Servo-n will provide vulnerable neonates with the support they need while protecting the lungs, brain and other developing organs.
Event-goers will have a chance to “sip and savour” from Vancouver’s most sought after food and drinks locales like The Mackenzie Room,  TUC Craft Kitchen, Minami,  The Arbor, Juniper  and more. A silent auction featuring more than fifty items will further entice and delight guests – all for an incredibly worthy cause.
Katie Jameson will take to the podium at Sip and Savour to speak about the twenty-two days her family spent at the NICU. Katie is an owner of one of the restaurants involved in the night and says, “The Mackenzie Room is so proud to be part of Sip + Savour again this year, an event that is incredibly close to our hearts. Besides our love for sharing great food with new friends, we want to support BC Women’s Hospital in any way we can, we want to give back to the place that cared for our son so diligently and with such great love. Our first son Lochlan lived for twenty-two days in the NICU at BC Women’s, he received state of the art procedures, round the clock care from brilliant doctors and nurses and we as parents we talked to with such compassion that it felt like a home to us. Having a world class facility in our back yard of Vancouver is something everyone one of us should support.”
For more information on the event visit numpfer.com/pages/sip-and-savour or on Facebook, Twitter and Instagram and buy your ticket here. Those you cannot attend but still want to help can make donations to the BC Women’s Foundation by clicking here. Share your photos and follow along with event hashtag #sipandsavouryvr.
Scroll down or click here to read:

Personal stories on lives the BC NICU has touched including Sarah

Robbins and the Milton, Kim, and Janzen families.

* More about numpfer and founder Sarah Robbins
* More about the BC NICU
The BC NICU has deeply touched the lives of many families in the province here are four:
Robbins Family: 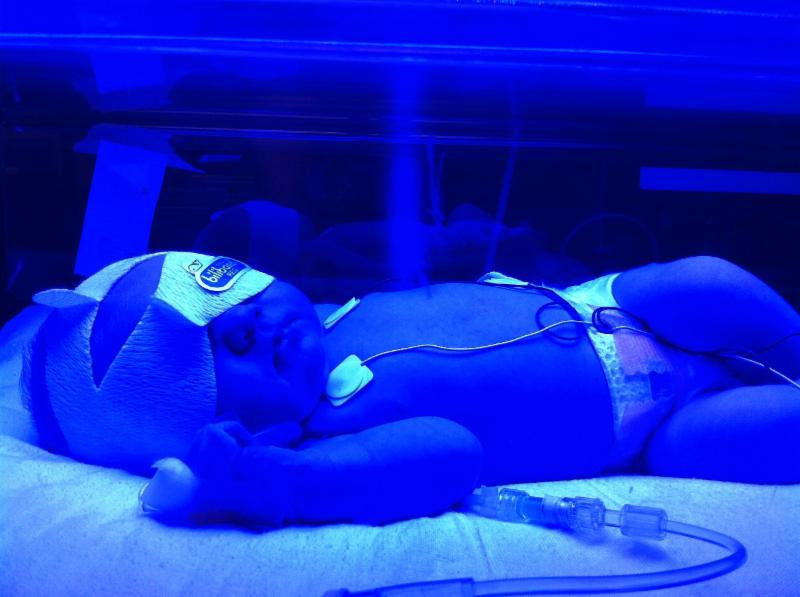 Charlotte was delivered at BC Women’s Hospital via an emergency C-Section after a difficult, intensive eighteen-hour labour filled with painful complications. Sarah and her husband, Sean were over the moon to greet baby Charlotte but quickly noticed the baby’s lips were turning blue. The doctors acted quickly, taking Charlotte away to assess her condition leaving the new parents full of questions and worry. Charlotte spent the next three days in the Newborn ICU being monitoring and treated around the clock for jaundice and a variety of other issues.They were both so humbled and appreciative by the efforts of the incredible nurses and doctors that were so dedicated to ensuring that Charlotte was strong and healthy enough to go home and start her life. Deeply grateful for the care, Sarah is dedicated to “paying it forward” by staging the annual Sip and Savour food and drink fundraiser in support of BC Women’s NICU.
Janzen Family: 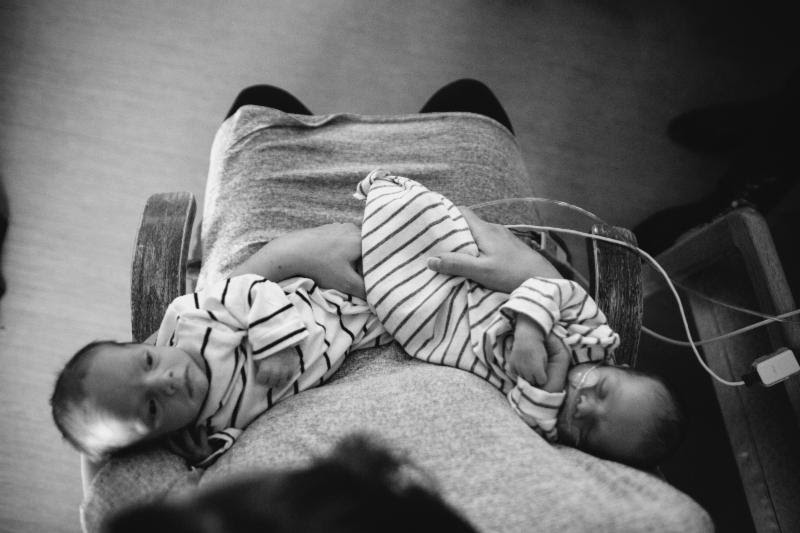 Lisa Janzen was pregnant with twins, Finn and Bowen, was diagnosed with HELLP syndrome, a hidden pre-eclampsia. On November 18, 2015, Lisa’s platelets dropped and was rushed into an emergency c-section she had to be put under due to not enough platelets for a routine c-section. The Janzen family also found out during pregnancy that Bowen had a heart condition.When Lisa awoke from surgery, she was introduced to her two beautiful newborns twins. Things seemed to be going well until they discovered one of the boy’s sugar levels were dropping and they ended up being admitted into the NICU. They both spent a few days in the NICU – a very difficult time for the family. Finn was the first to be released from the NICU, but Bowen was being monitored closely as they decided to operate at 10 days old. The family felt so helpless and guilty with one twin in their recovery room and one downstairs in the NICU, they weren’t able to bring Finn down to the NICU, so when we wanted to visit Bowen, they had to leave Finn with the nurses, a constant battle of feeling as though they were having to choose between their children. It was not the start to motherhood that Lisa had dreamed of.
As emotional and difficult this time was, the family has the most beautiful and nostalgic memories of BC Women’s and the NICU. The nurses were all so caring, empathetic and incredible at their job. The Janzen’s remember watching and admiring their work as they attended to every machine beep and newborn cry. To this day, when the family goes for Bowen’s yearly heart check ups at Children’s Hospital and they see that BC Women’s and NICU sign, they are filled with both heartbreaking yet sentimental feelings. Lisa says it’s hard to describe how a place where you never want to be becomes so precious and nostalgic. The Janzen’s feel so incredibly grateful for the amazing care they were given by the teams at the hospital and express how fortunate we are to have such a world class hospital so close to home. Today, Finn and Bowen are two thriving, active and imaginative soon-to-be three year old twins.
Kim Family: 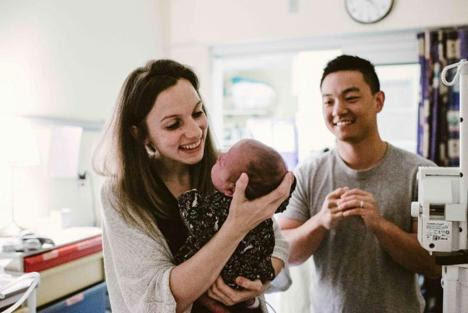 Laesa and James’ daughter was born at thirty-two weeks with Complex Congenital Heart Disease and was placed into the BC Women’s NICU where she spent four months in the care of nurses, doctors and neonatologists. From the first few moments of her life through the next few weeks the family began to learn of the complications this presented inside her tiny body; passageways with holes, valves not working, bones too small. This lead to countless OR visits, IV’s, PICC lines, blood transfusions, ventilators, and heel pokes. It became clear the baby’s airway problems and inability to breathe presented an even greater challenge than her heart issues. After 60 days intubated the doctors performed a Tracheostomy that began the journey to bring Baby Kim home.
Laesa and James Kim’s find it hard to put into words the gratitude they have for the nurses and doctors at BC Women’s NICU.  The team who cared for Baby Kim was right there with them for each obstacle, setback, milestone and celebratory moments; they fought and cared for the baby like she was their own. The journey has not ended since leaving the NICU, but the life she has, combined with the skills and confidence her parents have gained, all came from the people and experience at BC Women’s NICU.
Milton Family: 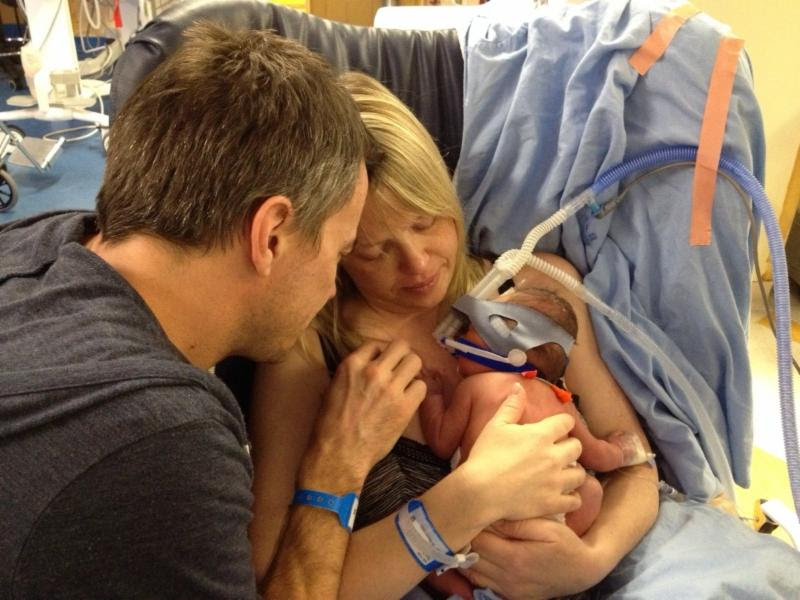 Rigel Milton was born suddenly at 33 weeks at BC Women’s Hospital where he was admitted to the NICU and received help breathing, with feeding, light therapies, along with other interventions for the next month. It was not an easy time for the Milton family, but they knew they were not in it alone as they spent their time in the NICU alongside the caring and dedicated teams of doctors and nurses. Tracy Milton, feels deeply grateful for the amazing facilities and the care provided at BC Women’s during Rigel’s first days, she’ll never forget the dedication to helping the family learn how to care for their new tiny babe. Today the Miltons have a happy and healthy son, and jumped at the opportunity to get involved and help the Sip and Savour team for this years’ event.
About numpfer
Named after founder Sarah Robbins’ childhood nickname, numpfer is an organic, multi-function baby product line made in Vancouver, British Columbia. The stylish and highly absorbent, ‘must have’ bibs work triple time as bib, washcloth and burp cloth. The no-fuss, side-tie design offers easy fastening allowing baby to stay dry, cozy and comfortable. The blanket line is equally essential for swaddling, and cuddling with luxurious softness against baby’s delicate skin.
numpfer is a result of Sarah’s observations of the nurses using washcloths as bibs during her experience at BC Women’s NICU. Once home Sarah couldn’t find the functional, absorbent, soft and stylish bib she was searching for – so she created  her own. The result was numpfer – a line of multi-use, ultra soft bibs that has grown to include blankets – and is now sold in 45 stores all over the world.
About BC Women’s Newborn ICU
When a baby is born too soon, too small, or too sick to survive without help, BC Women’s Hospital’s Newborn Intensive Care Unit is there to deliver the highest level of life-saving care in BC and the Yukon. Many hospitals focus on either mom or baby, but BC Women’s, recognize the importance of caring for both together under one roof.
About BC Women’s Hospital Foundation
BC Women’s Hospital & Health Centre Foundation is dedicated to raising sufficient funds to enable BC Women’s to function as the leader in women’s health. Donor support enables the Foundation to support programs at BC Women’s that reflect the healthcare needs of women and their families. For more information on the Foundation please visit bcwomensfoundation.org

CLEAN OUT YOUR CLOSET FOR A CAUSE