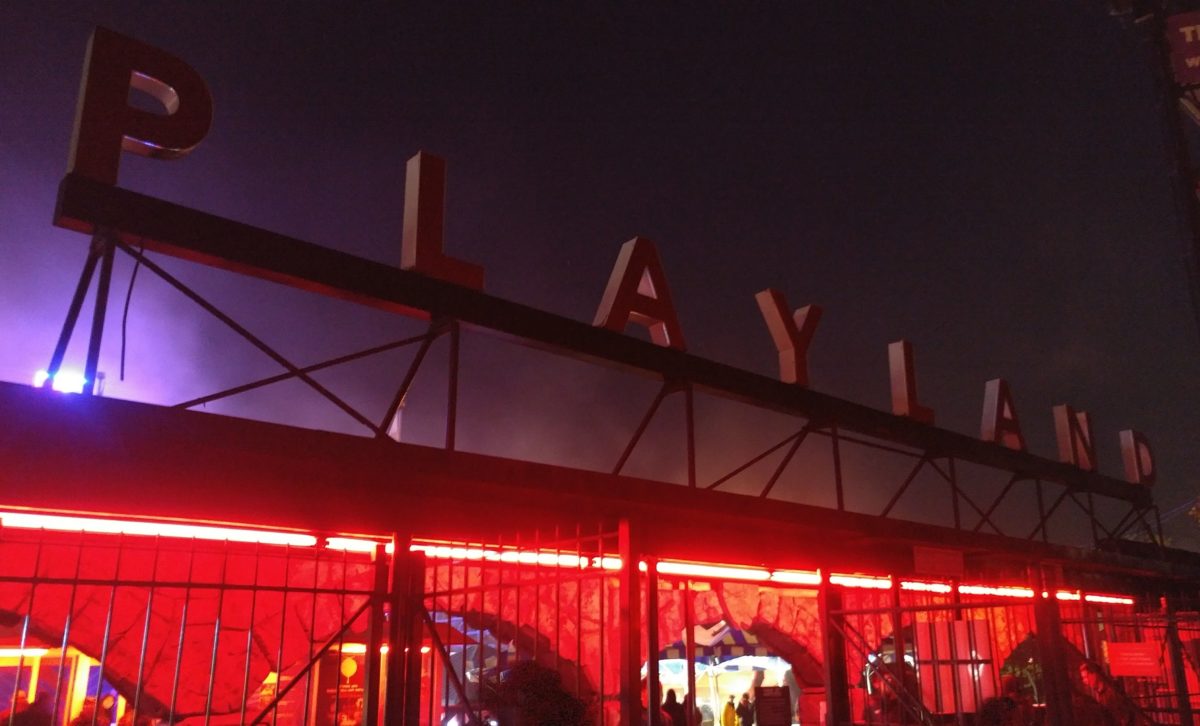 Last weekend my family had the opportunity to attend Fright Nights at Playland.  Fright Nights transforms Vancouver’s Playland into a haunted, scary, thrill seeking venue where you can get your scare on, during select evenings in the month of October.  Vancouver has experienced incredible weather for a majority of this month and tonight was no different. We were thankful this October evening’s clear skies and better than average temperatures as we headed out that night.

Fright Nights began in 2003 and quickly became one of Vancouver’s most popular Halloween attractions.  This year admission includes 8 haunted houses and 20 of Playland’s most popular rides. Admission and hours vary depending on which night you attend, they are open Thursday through Sunday night and group rates are available for community groups.  Tickets purchased online receive a discounted rate. You can find those (here).

There is plenty of pay parking across the street from the main gate, but you can also find street parking and walk a few blocks, like we did.  Fright Nights opens at 7pm and the sun had just dipped below the horizon when we arrived at 7:30pm. As we approached the entrance, the gargoyles hissed out smoke and the air was full of a thick fog. If you purchase tickets beforehand, either online or at 711 then you can bypass the ticket purchasing lines, and go directly to the entrance gate. There, you show your passes and go through a security check.  I was reassured to see the security check and how thorough they search the bags. There was also a police presence inside the gates, another level of security for the patrons.

Once you are inside, the only question is, “Where do we start?” This depends on your preferences; are you there to experience the haunted houses, ride on the rides, or a little of both? When we first arrived, there were very few people in line for any of the rides and none of us had ever been on a Playland ride in the dark, so we started there.  The Wave Swinger filled up rapidly and we were off. Quickly it hits you, be sure to dress warmly! Although we all wore pants and sweaters along with a jacket, the wind from the ride cuts through your clothes like Michael Myers butcher’s knife. Scarves, toques or ball caps and some gloves are advised.

Be ready to be jump scared and approached while walking from ride to ride by the characters roaming the streets. Their make-up was gory, and they were a lot of fun to interact and joke around with. At one point a character took my phone to take a group photo for us, but first he took a selfie!

From there we took a ride on the Hellevator, which was great fun at night.  What a view, and the screams as your stomach is left in the air were heard throughout the park. Next, my husband and daughter rode Breakdance. The Enterprise spins you furiously, so only my daughter rode that one.  Smiles and laughter were seen and heard on the Pirate Ship, in the fog filled air. Music Express is a family favourite and we rode to the song, “Rock Star” by Post Malone. When you ride this one, be sure to get into the car closest to the centre of the ride.  Due to centripetal force, the person on the outside gets amusingly crushed by the other two in the car.

We sat and watched Monsters of Schlock for a few minutes and within that time one of the men shoved not only a huge nail into his nose but a fork as well!  Audience participation is encouraged and one women had to pull the nail out of his nose. They interact a great deal with the audience, and were entertaining, if not a bit gruesome to watch!

I have been on most rides in the past, however Atmosfear and The Beast are two I’ve refused to ride. Heights and spinning combined are a recipe for disaster, at least in my head. I knew though, I had to ride at least one of them that evening.  On my 50 before Fifty list, I wrote that I would ride Atmosphere before I turned fifty; looked like this was my chance. That idea and the haunted houses had my stomach full of butterflies, or more aptly for an evening like this…bats. Thankfully the line at Atmosfear was short – I would have less time to think about the experience before experiencing it.  There was another family behind us and they were very encouraging, letting me know they had all been on Atmosfear before and I would do just fine. Honestly, I was calm but still fears were tucked away in the corners of my mind. They don’t call it Atmos”fear” for nothing.

Suddenly it was our turn, and as I entered I quickly looked for any seats without the number 13 on them.  Holding my breath, I secured the safety bar. When the ride operator saw that our seatbelts were not latched, she reminded us to buckle up for safety.  Of course we did so! There was no turning back now. I held my breath while we waited for the ride to lift us off the ground. You are lifted high in the air, 66 metres to be exact, and the swings can rotate 360 degrees as the wind blows you while you’re spinning around and around at speeds upwards of 70km/h.  No joke, you are spinning incredibly fast and our swing almost rotated the entire way around a couple times. The view, when I chose to open my eyes was absolutely incredible, especially the large crescent moon sitting close to the horizon. After a number of rotations, the swings slowly began to descend as we continued swinging and finally our feet touched the ground.  The ride is exhilarating and having faced my fear of heights, I felt pretty incredible too. I will definitely try the ride again, next time in the daylight.

The line was long for the Corkscrew, but not as long as the wooden coaster, which was over an hour by this point in the evening.  Interestingly enough, as we stood waiting, I noticed that not one person around us had their phone out. Every single person waiting in that half hour line at the Corkscrew was talking, laughing and enjoying real-life conversations and friendships.  It was refreshingly new for a generation who seems so tied to their electronic devices. The ride was fast and jolted you around, throwing you left and right, up and down and upside down.

At this point in the evening we decided to try out a few of the haunted houses.  There are a couple houses within the ride area but the majority of the houses are down to the left of the main entrance clustered together.  The houses all have different names and themes but the idea is the same: scare the hell out of the patrons walking through them. The newest addition, created this year, is “The Bloodshed”; its line wound back and forth for at least a forty-five minute wait.  It is extremely popular considering that, inside there awaits mutilation and murder. In “Keepers Doll Factory”, a backstory of cloaked men, missing limbs and real life horrors will have you fearing for your life. “Fear” puts you up against your real life phobias.  If you fear the dentist, heights, germs, being gored by wild animals or being buried alive, this is not the house for you! The “Hollywood Horrors” house allows you to relive the fear you felt while watching horror movies from the 80’s and 90’s, you may have to run from Michael Myers, and Freddie in order to save your life.

Fright Nights haunted houses are populated with costumed actors, so be ready to be jump scared as they leap out at you from behind closed doors, through broken windows or from under any great hiding spot.  It’s very dark inside and strobe lights are used in many instances, so those with health risks like heart conditions or epilepsy should be aware. The actors make for a heightened experience, guaranteed, but you’re also going to enjoy the whole experience if you go in with the right attitude.  My daughter loved it so much, she is going back again with a group of friends. Are you brave enough to attend Fright Nights at PNE-Playland?