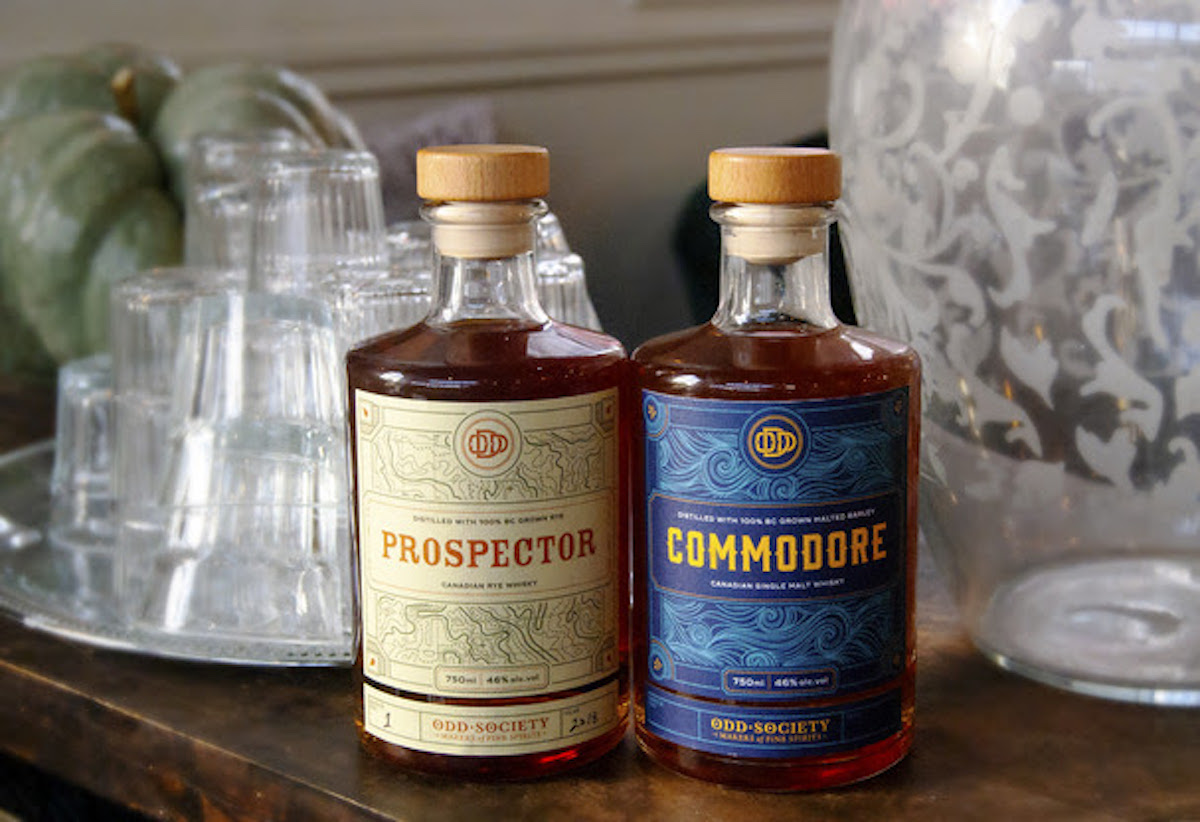 Award-winning Vancouver distillery, Odd Society Spirits, officially launched its newly branded, highly-anticipated single malt and rye whiskies made from 100 per cent local grains on Sunday, Dec. 16, 2018.
Odd Society Spirits is proud to introduce the refined and respected Commodore Canadian Single Malt Whisky, and the wild and admired Prospector Canadian Rye Whisky.
The malted barley and unmalted rye used in the whiskies are grown and harvested in B.C. by local farmers, then shipped to Odd Society Spirits where founder and distiller Gordon Glanz crafts his whisky from grain to glass. Glanz ferments and distills onsite in small batches using traditional methods, allowing the whiskies to age for a minimum of three years. The whisky is bottled and sold direct from the distillery and through local retailers.
“We have been crafting whisky since the beginning, releasing small experimental batches for the last two years.” says Glanz. “It is very exciting to launch not one, but two whiskies, both with unique identities that capture the quality and craftsmanship of the spirit.”
Odd Society Spirits once again collaborated with local brand consultancy Cause + Affect to create the identities for its whiskies. Cause + Affect was tasked with developing two labels that feel related but noticeably different. They developed elements that fit within the Odd Society universe, but also integrate the recipe’s country of origin to tell the story of two characters. The brand narrative begins with two brothers who emigrate from Scotland and travel together to the West Coast of British Columbia to start their life. One brother is struck by the vast coastline, and the other brother, the land. Each will make his mark in B.C. history, but in very different ways.
Honouring tradition—beckoning back to a Scottish heritage—while proudly thriving in its West Coast berth, Commodore Canadian Single Malt Whisky was matured in once-used ex-bourbon quarter casks, yielding a whisky that is lighter, softer, and amazingly easy to sip. This paragon of fine spirits is distilled with 100 per cent B.C.-grown malted barley. To that, it owes its distinctive peppery-sweetness, along with its dark fruit and tobacco notes. This refined spirit is unyieldingly confident and proudly declares: welcome to the New World. Odd Society Spirits received top honours for its single malt whisky at the 2018 Canadian Artisan Spirits Competition, winning Gold for Best in Class in the whisky category. It was also named Audience Favourite at the 2018 BC Distilled festival in April.
Standing head-to-head with ryes of yesteryear while striving for a distinctly West Coast experience, Prospector Canadian Rye Whisky is here to stake its claim. Made with 100 per cent Northern B.C. rye, transformed into liquid, steam, and back again, it is then coaxed into new, heavily charred American white oak barrels. With a heady nose of brown sugar, dried prune, vanilla and oak, this full-bodied rye melts on the tongue into light spice and stone fruit notes, leaving with a crisp, dry finish like crackling leaves.
Odd Society Spirits is releasing both whiskies at 46% ABV in 750 mL bottles. Priced at $64 for the Prospector Canadian Rye Whisky, and $68 for the Commodore Canadian Single Malt Whisky, the majority will be sold at the distillery’s bottle shop and cocktail lounge located at 1725 Powell St., Vancouver. The remaining bottles will be available at select private liquor stores throughout Vancouver and the Lower Mainland, as well as the Interior, the Okanagan, Vancouver Island and Alberta (price will vary).
About Odd Society Spirits:
Odd Society Spirits is a small-batch B.C. Craft-Certified distillery located in the heart of East Vancouver. Dedicated to combining old-world distilling traditions with new-world ingredients and ingenuity, Odd Society Spirits has created a family of spirits that entice and intrigue. Open Thursday through Sunday, Odd Society Spirits distillery and cocktail lounge is located at 1725 Powell St., Vancouver, B.C.

Give a Dram this Father’s Day

This is the holiday shopping you never get tired of

#Friday Favourites – where to take your Valentine