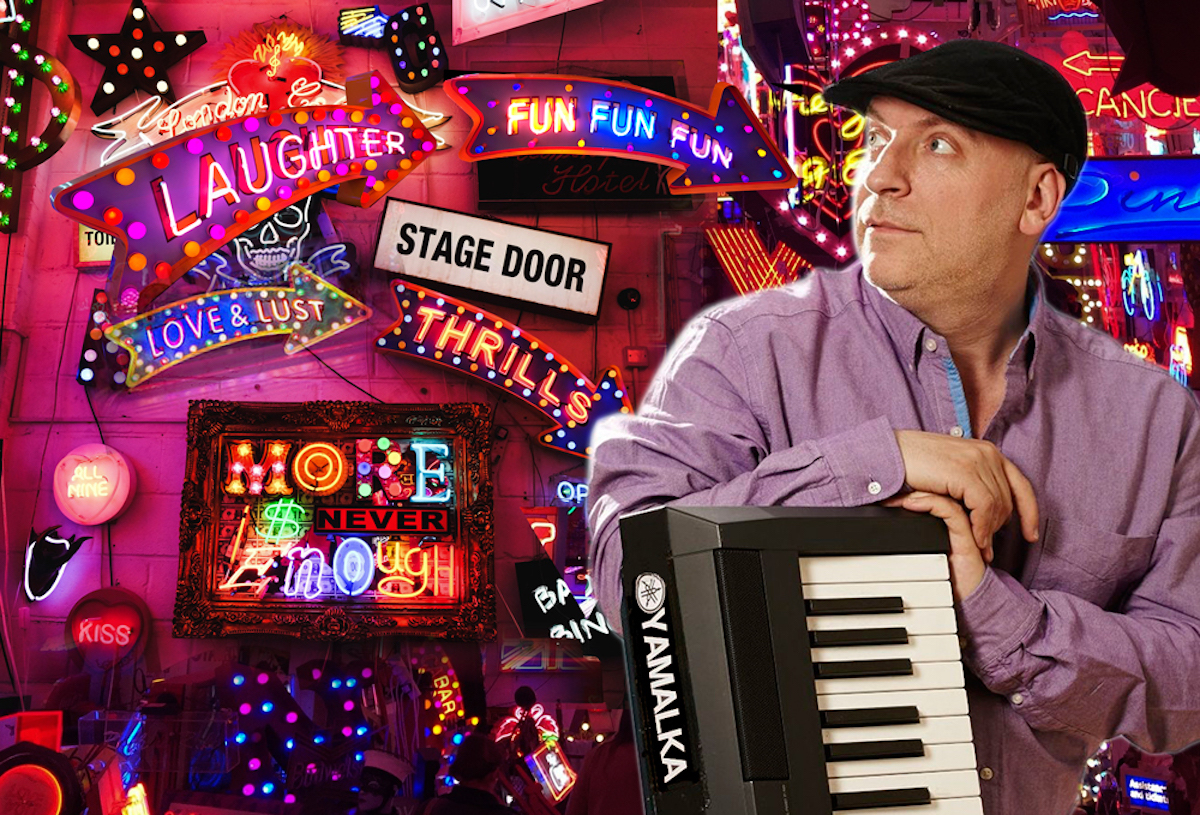 The Chutzpah! Festival returns during a new late Fall time period from October 24 to November 24, 2019 with performances at the Norman Rothstein Theatre, Vogue Theatre, Rickshaw Theatre, and The WISE Hall. Tickets range from $24 to $60 (plus applicable fees and service charges) and are available online at www.chutzpahfestival.com or by phone at 604.257.5145. 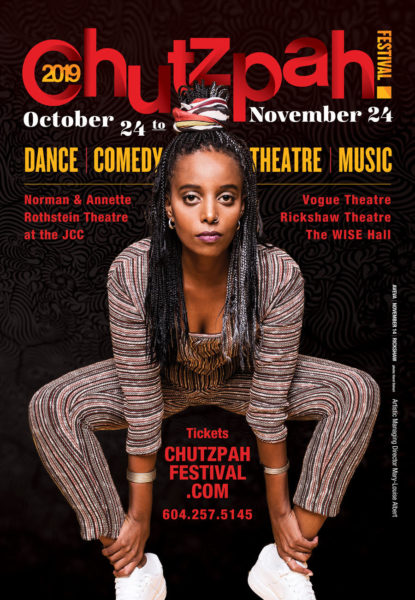 Now in its 19th year of celebrating culturally rich works in comedy, music, theatre and dance, the Chutzpah! Festival has established a reputation for presenting Vancouver audiences with new and exciting, critically acclaimed artists from all over the world. This year’s Festival will also showcase live music with film, and shines a light on artists from the U.K., Israel, Italy, U.S.A., and Canada.

“I’m overjoyed to be able to showcase such important, illuminating, and multi-disciplinary works at this year’s Festival, and proud to have shared so much with Vancouver audiences over these past 15 years as its Artistic Managing Director,” says Mary-Louise Albert. “2019 will be my final year with Chutzpah! as I move into a new chapter in my creative and personal journey. After a 20-year career as a professional dancer I could not have landed in a better spot than here at Chutzpah! and the JCC working with so many amazing people — which allowed me the space, generosity, trust, and understanding of my ‘no holds bar’ approach to work and life — which ultimately resulted in a second career and artistic vision that I am so proud of. I look forward to sharing my last Festival with you!”

The 2019 Chutzpah! Festival is pleased to present the following lineup:

She’s always three steps ahead of the crowd. She has to be. She’s “Quick Sand”. In these fast-paced times, a lady can’t stop moving. You never know what you might encounter next in this fun house world we’re living in. So, Sandra takes control, bringing a mélange of musings, music, and whimsy – “never boring, j’adoring” is her motto, covering the waterfront of the outrageous, quotidian, and glamorous! Performing with a three- piece band, this iconic performer will make for a fun and memorable Halloween night.

Iris Bahr is an award-winning writer, actor, director, producer and host of the hit podcast X-RAE. Her critically acclaimed solo show, DAI (enough), has had a hit run Off-Broadway, has toured around the world, and won the prestigious Lucille Lortel Award for Best Solo Performance. Bahr brings us her famed stand-up and characters from DAI (enough) balancing “pungent humour, bittersweet pathos, and a sublime charm.” (LA Weekly)

Multi award-winning, London-based songwriter, broadcaster and musical storyteller Daniel Cainer performs his internationally acclaimed Gefilte Fish and Chips at Chutzpah! A Canadian premiere, Gefilte Fish and Chips is based on up-close-and-personal stories of what it’s like to be Jewish – and British – then and now. Travellers’ tales, feuding tailors, a naughty rabbi, family fables…and foibles. All of the human condition is here, lovingly and intelligently depicted in a remarkable collection of stories in song from this highly skilled musician and performer.

Renowned guitarist and composer Gary Lucas performs live in front of two iconic films: Spanish Dracula (9:00pm) and Frankenstein (7:00pm). Lucas is a world-class guitar hero, a Grammy-nominated songwriter and composer, an international recording artist with over 30 acclaimed solo albums to date, and a soundtrack composer for film and television.

Chutzpah! Festival presents the West Coast premiere of Ethiopian-Israeli singer and songwriter, Aveva Dese. A rising star in the Israeli music scene, AvevA’s music fuses traditional Ethiopian sounds and groove with her soul-pop songs, producing an aesthetic with universal appeal and a fascinating intercultural connection. AvevA sings powerfully in both English and Amharic about society, freedom, and love. With her talented band, AvevA has played many of the popular festivals in Israel as well as venues in France, Germany, England, Canada, Russia and the United States, including a special show at the Kennedy Center in Washington, D.C. **Opening for AvevA is B.C.-based Leila Neverland with Mountain Sound.

Ravid Kahalani and Omer Avital first collaborated in 2010 with the creation of acclaimed musical act Yemen Blues. Since the group’s breakthrough in 2011, Yemen Blues has gone on to great international success. After several years of separation – while Avital focused on his glorious Jazz career and Kahalani lead Yemen Blues at hundreds of outstanding live shows around the globe – the two decided to join forces again and present a NEW collaboration in their own powerful musical language that has only matured and grown stronger over the years. This energetic project HALLEL brings together the influence of Yemenite Jewish culture and Afro Funk groove.

Guy Mintus is a true citizen of the world and. Coming from a mixed heritage of Iraqi, Moroccan and Polish Jews, he is based between Tel Aviv and New York while constantly on the go having recently performed in Brazil, India, Bulgaria, Switzerland, France, Germany, and various Canadian and American cities. Mintus is a trained concert pianist with the energy of a rock star and a jazz musician’s sense of adventure who is unafraid to throw into the mix his native Middle Eastern scales and rhythms. His music is a meeting point between different rivers of inspiration flowing freely into each other.

Rami Kleinstein is one of Israel’s most renowned pop superstars. A triple-platinum and gold-album award-winner whose songs have become a bedrock of Israeli culture, and have often been compared to those of Elton John and Billy Joel. Known for his beautiful love songs, soothing voice and exquisite piano-playing, Rami aptly and cleverly weaves his songs together with rich anecdotes laced with a poignant, delicate humour that gives the audience insight into his life as well as Israeli history. The Chutzpah! Festival is pleased to present this Western Canadian premiere.

The Rescue: A Live Film-Concerto is a performative film experience that combines a 70-minute documentary film with a live musical performance of its musical soundtrack – to recount the little-known story of ‘Righteous’ Colonel José Arturo Castellanos, who collaborated with his Jewish friend to save thousands of Jewish lives during the holocaust by issuing Salvadoran nationality certificates while working as a diplomat. This groundbreaking film-concerto concept was developed by musicians and filmmakers Alvaro and Boris Castellanos, grandsons of Colonel Castellanos, as an emotionally engaging and uplifting way to tell the story of their grandfather, and as a pioneering narrative in holocaust education and commemoration. Co-presented with the Canadian Human Rights Museum.

The Trombonik Returns to New Chelm is a new satirical stage musical created by Geoff Berner and TJ Dawe along with Toby Berner, Tallulah Winkelman, and Jack Garten. Taking inspiration from the traditional comic tales of Jewish folklore about Chelm, songwriter/provocateur Geoff Berner and writer, performer, and satirist TJ Dawe along with friends present a Klezmer musical set in Depression-era Saskatchewan. A wandering con artist posing as a rabbi becomes entangled in the Prohibition whiskey trade. This production combines the social critique of Berner’s decades of activist songcraft with the comedic zaniness of Mel Brooks. **Following this performance is a celebratory full-on drinking, dancing Klezmer Punk performance with Geoff Berner and his co-conspirators, along with special guest and renowned clarinetist Michael Winograd, to mark Berner’s much-anticipated CD release on COAX Records and his first klezmer album in four years — GRAND HOTEL COSMOPOLIS.

Chutzpah! Festival is proud to present the Canadian premiere of The Diary of Anne Frank LatinX. Everyone knows the story of Anne Frank, the Jewish teenager hidden away while Nazi’s hunted down Jews during World War II. One American-Jewish director, Stan Zimmerman, is adding a modern-day twist to the production. Zimmerman says, “When I learned there are over a dozen Safe Houses in the LA area hiding LatinX families from ICE, it got me wondering — How do these families survive with so little money and needing to remain in the shadows? How do they not lose hope? What are their lives like on a day-to-day basis? Do they see the parallels to Anne’s story?”

Written and performed by BC born/UK based Tamara Micner, Holocaust Brunch brings to life through the remarkable true stories of Bluma and Isaac Tischler (z”l) – Polish-born Jews and Holocaust survivors who met in medical school in Tajikistan during the war, and went on to become renowned Vancouver doctors. This brave and moving one-woman show looks our trauma straight in the eye, from a third-generation perspective, and asks how we can honour the stories we inherit while breaking free from them.

Chutzpah! presents the full-length world premiere of ProArteDanza’s The 9th – a contemporary ballet of Beethoven’s 9th Symphony. In this 21st century perspective on Beethoven’s 9th Symphony, award-winning choreographers Robert Glumbek and Roberto Campanella explore social and political themes, which are brought to life with intense physicality by the Canadian company’s eight exquisite dancers. Described as “refreshingly innovative” (Toronto Star) and “a thrilling, 21st-century perspective on Beethoven” (Globe & Mail), the company matches the dynamism in the score and dance with a sense of adventure.

Italy’s MM Contemporary Dance Company returns to Chutzpah! with the Canadian premieres of GERSHWIN SUITES – choreographed by Michele Merola, and SCHUBERT FRAMES – choreographed by Enrico Morelli. Michele Merola has created Gershwin Suites using some of Gershwin’s most captivating music as soundtrack, and a new composition by Stefano Corrias, to bring together a rich mosaic of musical scents. The work, which is also inspired by the paintings of Edward Hopper, is danced with versatility and passion. Franz Schubert’s extraordinary music interprets the contrasting feelings of love, tension, melancholy and regret, but also of hope. A collage of famous beautiful pieces by Schubert is the soundtrack of Schubert Frames, choreographed by Enrico Morelli and danced with vibrancy by this extraordinary group of dancers. **Opening for MM Contemporary Dance is a world premiere choreographed and performed by Chutzpah! Dance Artists-in-Residence Alexis Fletcher and Andrew Bartee.

The Canadian premiere of COLORING by choreographer and Artistic Director Chuck Wilt is an episodic dance inspired by themes of identity, unity, and mutual respect through researching queer histories, drawing inspiration from personal narratives and bodies of artwork from members of the LGBTQ community. Commonalities rather than differences are uncovered. Joining the seven versatile, superb dancers is guest drag queen and cellist, Rose Nylons. UNA Projects is a bi-coastal dance company based in New York City and San Francisco. This full-length work has been praised as “one of radical vulnerability…eloquent sincerity…the performers dance with their skins turned inside out” (The Dance Enthusiast). **Opening for UNA Projects is a new duet, The Other Half, created and performed by Chutzpah! Artists-in-Residence, Vancouver’s Vanessa Goodman and New York-based Belinda McGuire with Lighting Designer James Proudfoot.

A very special week-long creative project with professional dance artists Troy Ogilvie and Rebecca Margolick along with leading Inclusions activist/actor/comedian Pamela Schuller. Members of the JCC Bagel Club and others will work with, help direct and create with the artists, in addition to solo performances by Ogilvie, Margolick, and Schuller – all culminating in one heck of a special Closing Night performance!

In addition to the programming mentioned above, the Chutzpah! Festival will pay tribute to the Jewish Community Centre and celebrate the 25th anniversary of its long-standing and renowned musical theatre summer camp created by Perry Ehrlich – Gotta Sing! Gotta Dance!; present local comedians in a comedy night of Shticks & Giggles; and host multiple workshops and creation residencies.

For more information on the 2019 Chutzpah! Festival, please visit the following platforms: