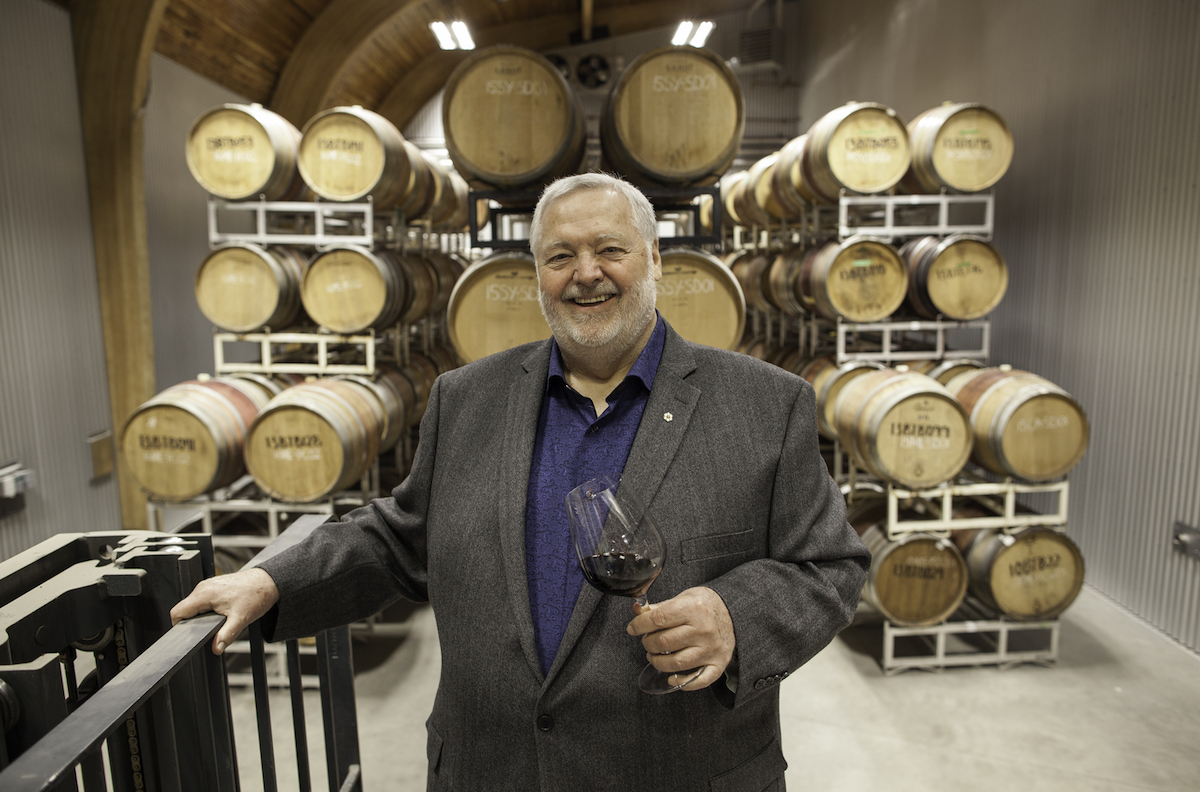 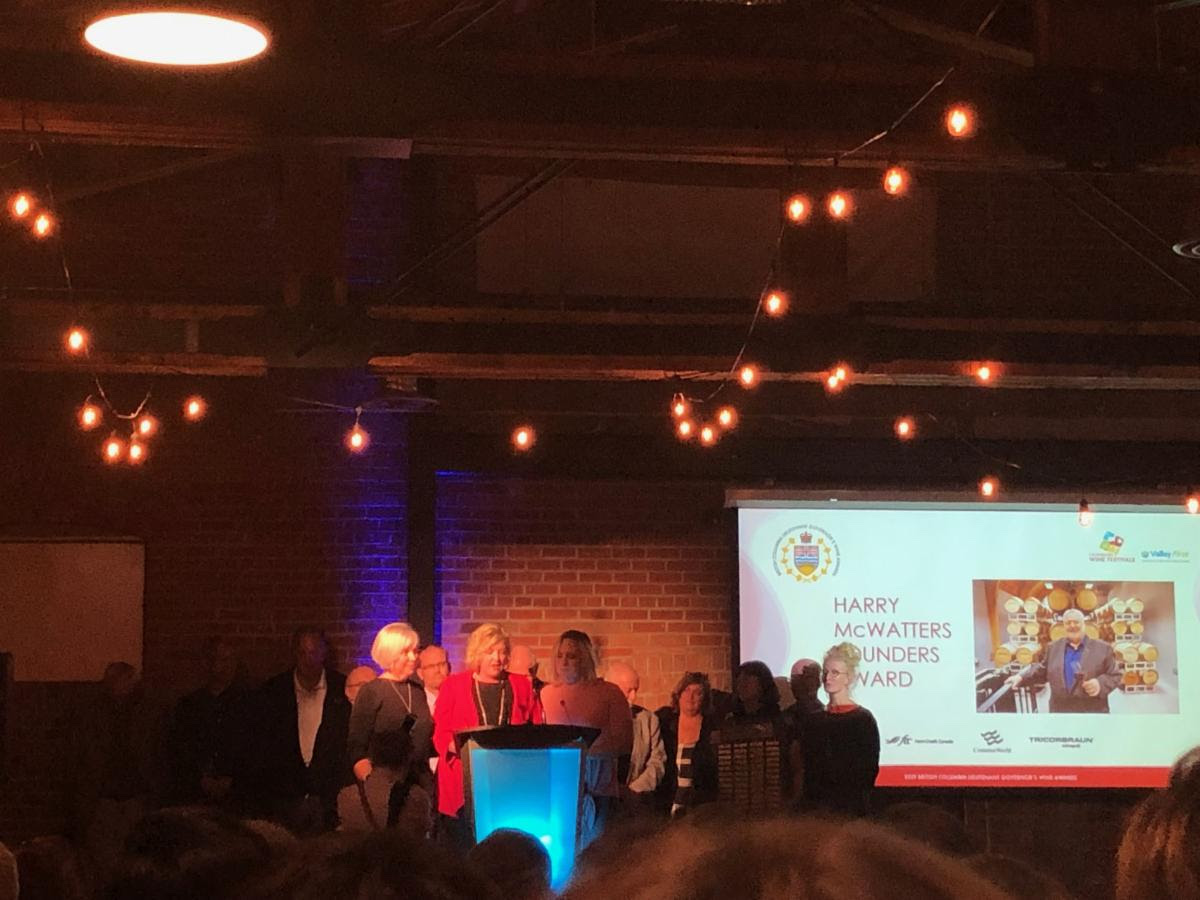 The British Columbia Lieutenant Governor’s Wine Awards event is the kickoff party for the Annual Fall Okanagan Wine Festival. Winery teams, industry professionals, members of the trade and media took part in the celebration that awarded medals to more than 100 British Columbia wineries. The most special moment of the evening was the presentation of the traditional Founder’s Award, but with a twist, as it was re-named as a surprise to the family.
Since 1985, The Founder’s Award recognizes outstanding and selfless contributions to the wine and grape growing industry and is offered as an achievement to pioneers of British Columbia wine. Past winners include George and Trudy Heiss, the Schmidt family, John Schreiner, and Christine Coletta. Because Harry was the Founder, he could never previously receive the award. This year the award was presented as a posthumous homage to Harry McWatters and has also been renamed in his honour, now called “Harry McWatters’ Founder’s Award”.
The event organizers emphasized how important and fitting this tribute is to the “Grandfather of British Columbia Wine” since he embodied what this award stands for. He was an individual with tremendous vision and unwavering passion and pride for British Columbia wines, who dedicated his life to the growth of this industry.
The award was presented by Christine Coletta and received by Harry’s adult children Christa-Lee and Darrien McWatters, and his wife, Lisa Lalonde.
Daughter Christa-Lee McWatters, who is now the president & CEO of Encore Vineyards emotionally and candidly responds.
“Since our dad passed away, we have been sorting out the business, so much of it was in his head. And we know everyone in the industry is watching. They want to see how we are coping. There are rumours swirling around. But there always are. You know what Harry used to always say,” she jokes: “if you haven’t heard a rumour in the BC wine industry by 10am, start one.”
“I’ve had to make some hard decisions,” she continues. “Like bringing all three of our brands (Evolve Cellars, McWatters Collection, and TIME Winery) under one roof; and we are limiting how much fruit we crush this year. I believe these decisions, while tough to get through, are right for the business. Simplifying some things gives us some time to re-group, focus, and take the company in the right direction.
“And the last thing I must share is that through all of this, our family and our team have been amazing. All are on board.”
Adding to this, on October 5, TIME Winery & Kitchen was honoured to win the “Farm to Glass” award at the Penticton & Wine Country Chamber of Commerce Business Excellence Awards. The spotlight is on this team for its merit, despite its emotional challenges.
Christa-Lee is looking ahead with conviction. “We invite you to come and see us at the winery or pick up a bottle of one of our brands. Together we will raise a glass to Harry, the new Founders Award, the legacy he leaves, and the future we will all create in this industry.”
About TIME Winery, Evolve Cellars, and McWatters Collection
TIME Winery & Kitchen is a fully operational winery, tasting bar, restaurant and guest experience centre located in the heart of wine country in downtown Penticton. The McWatters Collection is a small, exclusive offering of wines; a legacy label that celebrates the McWatters family and its role in forming the BC wine industry, and Evolve Cellars offers approachable, bright, delicious and affordable wines from its welcoming winery located in downtown Penticton.
About the Okanagan Wine Festivals Society
The Okanagan Wine Festivals Society is responsible for producing four seasonally inspired Okanagan Wine Festivals in Winter, Spring, Summer, and Fall. It is also responsible for Signature Wine Events including Sensation, the fall wine finale by Valley First, the WestJet Wine Tastings, and more. It produces and runs two annual wine judging competitions: the British Columbia Best of Varietal Wine Competition, and the province’s most prestigious and oldest wine competition, the British Columbia Lieutenant Governor’s Wine Awards. For more information visit, www.thewinefestivals.com.
Media release provided by Giulia Sa Barreto, Town Hall Brands. Feature image, photo credit Jeff Bassett.
[wdi_feed id=”2″]