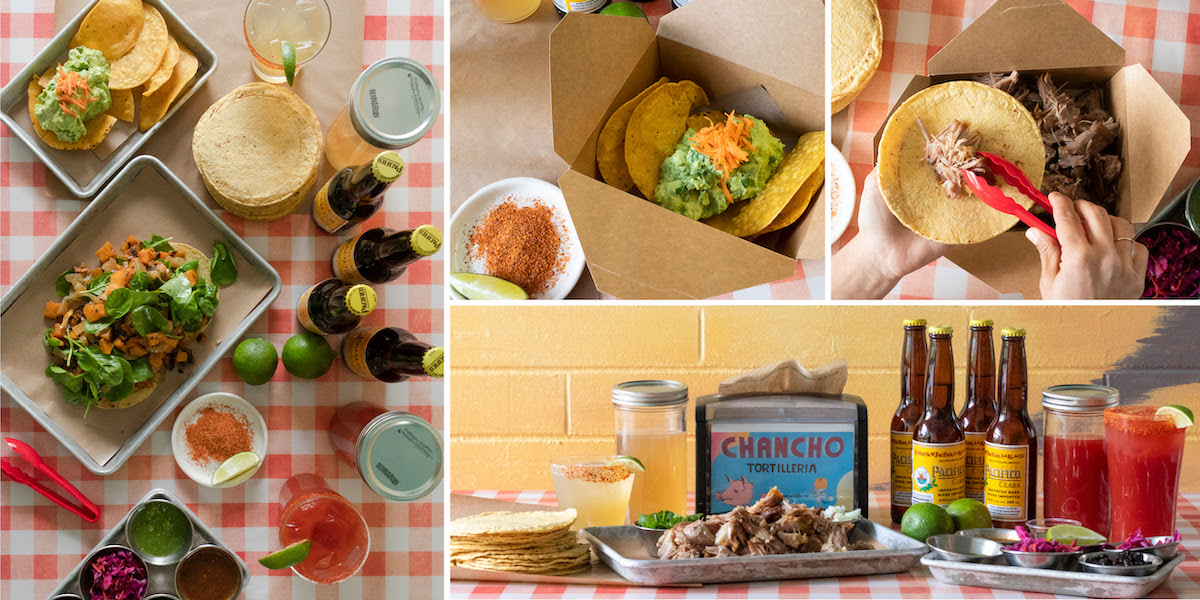 Fresh off its recent re-opening, beloved neighbourhood tortilleria Chancho Tortilleria is getting guests in the Cinco de Mayo spirit by offering Tacos-To-Go Kits including Margarita or Michelada mixes for pickup from the eatery at 560 Davie Streeton Tuesday, May 5.

Featuring enough food to feed four amigos or amigas, Chancho’s Tacos To-Go Kits are offered for $55 plus tax and include:

In addition to the Cinco de Mayo Tacos-To-Go kits, Chancho also offers a variety of carnitas and vegetarianos tacos, fresh native corn tortillas, masa dough and housemade sides in addition to bottles of Mexican beer (Pacifico, Negra Modelo and Modelo Especial), Lock & Worth wines and non-alcoholic bebidas for pickup with food orders from the restaurant.

Launched in 2017, Chancho Tortilleria has carved out its reputation as a local destination thanks in part to a true-to-its-roots menu of authentic Mexican food, tortillas made fresh daily with non-GMO, ancient heirloom corn procured from small farms in remote Mexican communities and a kitchen guided by traditional techniques, flavours and recipes.

Earlier this year, Chancho was named to Eater’s compilation of the 38 Essential Vancouver Restaurants, with a feature that lauded the local tortilleria for providing a “Mexican dining experience that will likely ruin you for any other tacos in town”, its “marvelous, melting pork sold by the pound”, and “Incredible tacos, kissed with a whisper of char.”

HOW TO ORDER
Pre-orders for Chancho’s Cinco de Mayo Tacos-to-Go Kits can be placed at chancho.ca for pickup at the restaurant (560 Davie Street) on Tuesday, May 5.

ABOUT CHANCHO TORTILLERIA | Chancho Tortilleria has been serving up authentic Mexican experiences in the heart of Vancouver’s Yaletown neighbourhood since 2017. Featuring tortillas made fresh daily from non-GMO, heirloom native corn procured from farmers in remote Mexican communities and topped with locally sourced, melt-in-your-mouth pork in addition to vegetarian options, Chancho is a casual, laidback tortilleria guided by traditional Mexican techniques, recipes and flavours and brings the sights, sounds and feel of a small, family run tienda de tacos north of the border. | chancho.ca