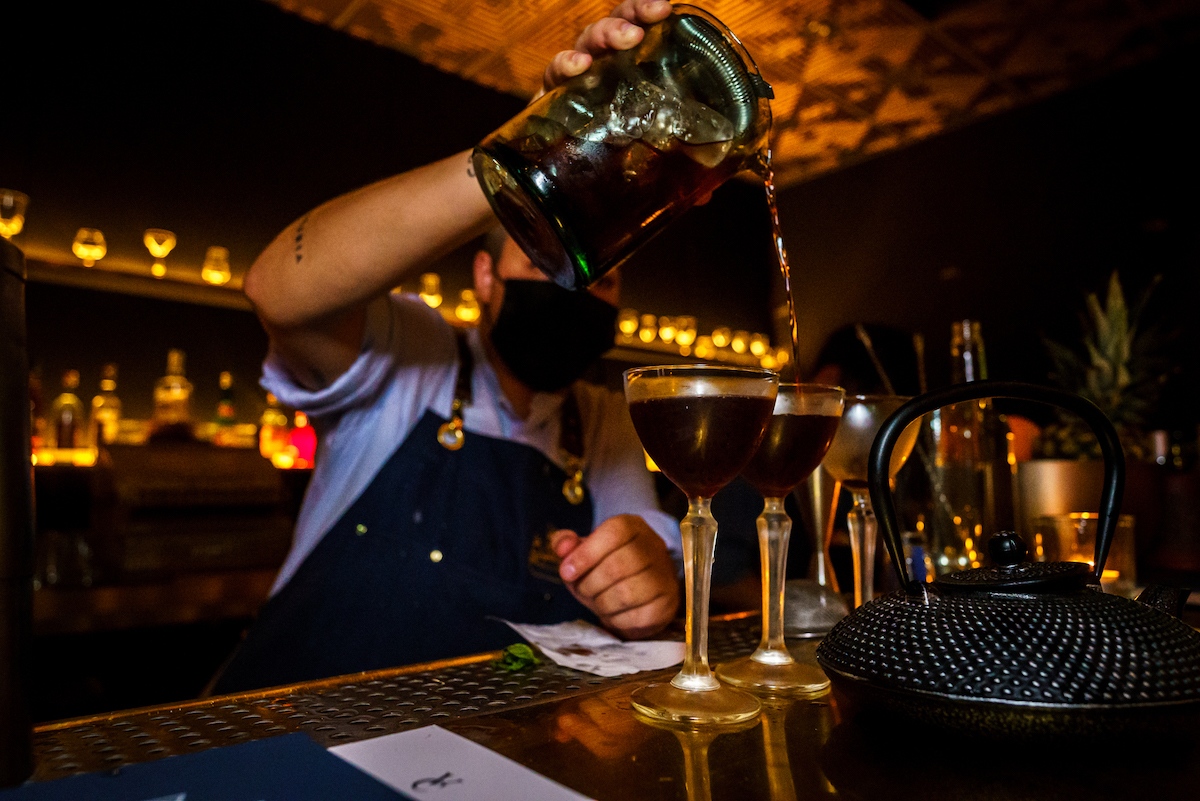 After a month of whispered word-of-mouth, Laowai — Chinatown’s Prohibition-era, Shanghai themed, hidden-lounge concept — is dropping the veil of secrecy.

Inspired by the false storefronts and secret passwords of speakeasies in Shanghai and Hong Kong’s cocktail scene, Laowai harkens back to an illicit and seductive period when that city’s infamous bars and clubs welcomed the world: locals, émigrés, and refugees; dreamers and deviants; celebrities and criminals.

Order the “Number 7” to be whisked past BLND TGER dumpling shop’s faux freezer door into a sleek and theatrical space that celebrates all the intrigue and glamour of a 1920s Prohibition-style watering hole, paired with a modern cocktail experience.

“Shanghai in the inter-War era was one of the most progressive and multicultural cities in the world,” says owner Lewis Hart, who was intrigued by the city and its history on his first visit, leading to many more over the course of the last decade. “In the 1920s and ’30s, the city’s nightlife hummed with a dynamic mix of the stylish and the seedy, with establishments welcoming to both locals and ‘laowai,’ or ‘old outsiders.’

“Laowai is informed by an energetic, rough-and-tumble period between two World Wars that existed in an utterly fascinating place,” says Hart. “For me, 1920s and ’30s Shanghai was—and is—so much more interesting than cities like New York or Chicago that most people think of when they picture the Prohibition era. Freedom, openness, and just a hint of danger… what better to fuel a cocktail experience?” asks Hart.

To give a suitable stage to the space, the Art Deco lounge has been designed by globally recognized, London, U.K.-based firm Bergman Interiors, and is their first North American project. Awash in padded emerald-green velvet walls; intimate semi-circular leather banquettes; and polished, verdigris accents of malachite; the sultry and sophisticated space accommodates 60 seated guests. A distinct avian theme runs through the rooms. In the front lounge, a flock of 50 custom-made, phoenix-in-flight light fixtures illuminate the space from above, while in the back room, rooted peacock lustre lamps lend a feeling of intimacy between the banquettes.

Behind the bronzed bar top, Bar Manager Alex Black (Wildebeest, Hawksworth) oversees a cocktail programme that blends contemporary tastes and classic recipes with accents and flavours locally sourced in Chinatown. Each of the dozen cocktails on the list is introduced with the tale of a historical figure that was its inspiration — be it the woman who became the most powerful pirate in the world (Red Flag Fleet); the popular city administrator who was also a not-so-secret opium smuggler (Jade Empire); the foreign Buddhist monk of legend who created the first tea bush (Behind Blue Eyes); or the woman who basically invented a martial art in order to fend off the unwanted advances of men (Snakes on a Crane).

Laowai is also home to the largest Baijiu list of its kind in Canada, with 11 different brands representing the varying and complex aromas of the world’s most popular spirit. Sold in 15ml (.5oz), 30ml (1oz) and 60ml (2oz) pours, the list encourages exploration and experimentation for afficionados and newbies alike.

Laowai does not take reservations.
Patrons are welcomed on a first-come, first-seated basis.

Behind BLND TGER
251 East Georgia Street (btwn Main and Gore)
Chinatown, Vancouver
No number
“Ask for the Number 7”

ABOUT INTER-WAR ERA SHANGHAI
Inter-War era Shanghai (1920s to 1930s) was a singular place, where the city’s established notable families of high society, city elders, and merchants rubbed shoulders with local gangsters, drug kingpins, and American and Mexican smugglers running Irish booze and Jalisco tequila through the ports on the “long way around” to the United States.

In 1921, as the Chinese Communist Party was being founded in reaction to the nationalism of Chiang Kai-chek and his supporters, Shanghai also sheltered the world’s largest community of Russians fleeing Communism. Eventually, European and Iraqi Jews escaping Nazi persecution arrived, as well as people from every corner of the globe.
At this time, most of the world (especially Canada and Vancouver), actively discouraged multicultural gatherings, be it through social convention or written law, or both. Meanwhile, Shanghai was, for the most part, a blithely free and open city where, to quote a popular Cole Porter song of the era: “Anything Goes.”

Provence Marinaside Invites You to Linger with new After Hours Menu