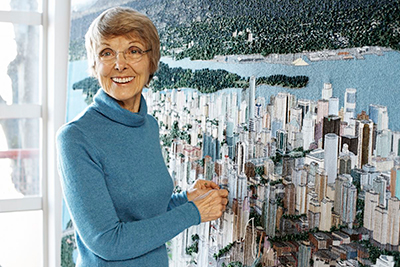 “There’s usually one perfect spot where you can see the whole city and then I imagine myself either in a helicopter or as an eagle flying around and I actually physically walk every inch of the city, sometimes going back and looking at a building over and over and over again until I get it exactly right…this take two or three years.”

Fiedler wants her piece to stay on permanent display. 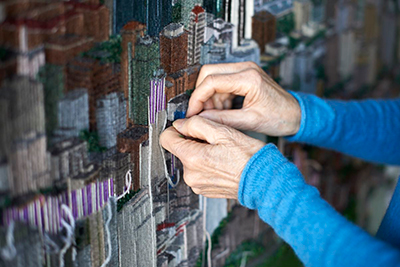 Using yarn from recycled sweaters, Fiedler meticulously weaves large scale cityscapes in pinpoint detail, from the number of floors in a building to the colour of the trees and water. She is best know for her tapestry tributes to the cities that have hosted Olympic Games, including Salt Lake City, Utah in 2002, and Sydney, Australia in 2000. Her work captures the architectural elements and spirit of each city at that moment in time.

Fiedler grew up in London during and after World War II, when recycling played a fundamental role in daily life. Since winning a prize in 1973 for Best Fibre Art in Vancouver, B.C, her work has been collected by notable corporations and individuals including Crown Zellerbach, Woodward’s, the CIBC, UBC, CBC, and Jim Pattison. Fiedler has exhibited in numerous galleries across North Aerica. Her work is more relevant than every today, as young artisans worldwide claim craft traditions like weaving as their own. Fiedler currently lives in Vancouver, B.C.

For more information on Sola Fiedler and the Vancouver Tapestry visit www.solafiedler.com

The Boys are Back in Town: Les Ballets Trockadero Return to Vancouver by Popular Demand

Starbucks is brewing up some holiday magic