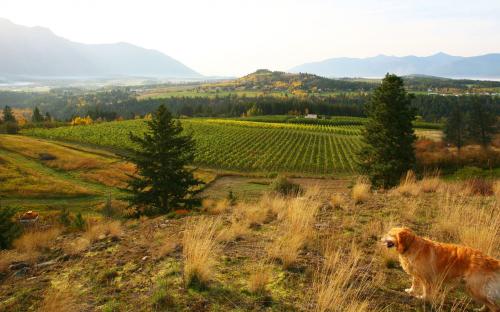 Bob Johnson couldn’t contain his smile when I dropped in for a visit to Creston’s Baillie-Grohman Estate Winery on Sunday. In his pocket were two medals from the recent BC Wine Awards. One, a Platinum, feted Baillie-Grohman’s 2012 Cabernet Franc as one of the best six wines in the province (5 platinum medals were awarded and another was bumped up to Wine of the Year). But it is the Gold that really thrills him. 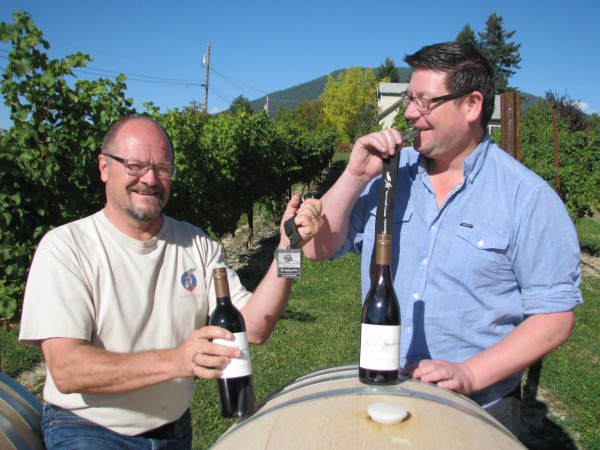 “Only two Pinot Noirs in the province were awarded Gold medals,” he beamed. “If there was any doubt about our ability to grow quality grapes in the Creston Valley, it’s gone now.”

Baillie-Grohman is on a run with its Pinot Noir, with a string of fine vintages and each getting better as the vineyards, now seeing their sixth harvest, mature. Johnson believes that the area will become known for Pinot Noir. And it’s hard to argue with him. Creston’s other two wineries at this point—Skimmerhorn and Wynnwood—have both had success growing the Heartbreak Grape.

So what is it about the Gold medal that thrills Johnson even more than the Platinum? It’s easy, it turns out. The Cabernet Franc is made with grapes grown in Osoyoos, on a vineyard that is proving that it just might be situated in the best Cab Franc location in the province. But the Pinot Noir is grown right in Erickson, on the hillside behind the Baillie-Grohman winery. It’s a testament to the location, viticulture practices (Bob’s wife, Petra Flaa, manages the vineyards) and the winemaker’s abilities.

“It’s all in the fruit,” Dan Barker insists. “No,’ it’s a combination of great fruit and great winemaking,” Johnson counters.

Barker? It’s a bit of a surprise that he is here at all. Like Skimmerhorn’s winemaker, Mark Rattray, Barker wasn’t sure until the eleventh hour that he would be allowed to return to make this vintage. He and Rattray are New Zealanders, and are the only winemakers their respective contractors have ever had. But they were caught up in the controversy generated by employers like Tim Hortons bringing in foreign workers, and the issue had both winery owners biting their fingernails. And it’s not like the owners simply prefer to have Kiwis making their wines, even though they have both had great success.

“We have never had a single application from a Canadian winemaker, not one,” Johnson says. He isn’t just referring to applications coming in over the transom—Baillie-Grohman and Skimmerhorn have to prove to immigration officials that they have advertised extensively within Canada. Qualified Canadian winemakers are busy working in the Okanagan, Southern Ontario, Vancouver Island and other grape-growing regions and in no way could anyone worth his or her salt justify taking a 6-8 week job hundreds of miles from other wineries.

Kiwis, though, are an emu of a different colour. These fellows are happy to come to Canada in their off-season for a couple of months. It’s added income but, perhaps just as importantly, it adds to their professional experience base. Check the resumes of most top winemakers and they will show experience working in more than one region. Different regions, different climates, different grapes, different wines, different challenges. It all adds up to a quality of experience that one simply can’t get in one place.

I left Baillie-Grohman after a very happy visit, but not before Johnson, Barker and I hopped in a four-wheeler and drove the length of the vineyards, stopping to taste grapes as we moved along. Most are at or near their desired ripeness, though winemakers like to push the envelope, letting the grapes develop more intense flavours as well as sugar.

Barker’s observation sums up why he enjoys making wine half way around the world from his award-winning Moana Park Winery.

“In New Zealand a great week of ripening can add nearly one brix of sweetness to the grapes,” he says. “Here, last week, we had grapes that ripened more than four brix—it’s astonishing, completely different than we get back home.”

I left the pair promising to return later in the week to take more photos, and to pick a row of grapes. Hard to refuse the offer when in my hands are bottles of Platinum and Gold medal winning wines.

That evening, unable to wait, I opened the 2012 Cab Franc. At their worst, Cab Francs are thin and grassy. At their best, they are full-bodied, aromatic, and complex, with a softness that balances out the tannins. This was unquestionably the latter. More earth than tobacco and leather—two common Cab Franc characteristics—the 2012 version has a marvelous balance, is wonderful on the nose and boasts a finish that just won’t quit. It is an outstanding example of what this grape can become.

Just a little teaser before I close. Stacked on a couple of pallets in the tasting room (B-G is now closed for the season) are cases of the winery’s first ever sparkling wines, soon to be transported to Summerland for disgorgement, dosage and re-capping. Rich in colour and four years in the bottle, this one is due for release in November. It will be our New Year’s bubbly, and I can hardly wait.