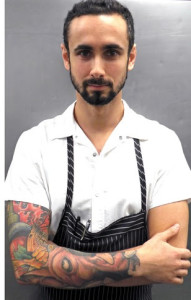 Scarfone joined the Hawksworth Restaurant team as Chef de Partie in 2011 and more recently, led the Private Dining and Catering division, Scarfone started his 11 year culinary journey in his home province with a two-year Culinary Management & Apprenticeship Program at Niagara College. With his fearless and adventurous spirit, Scarfone ventured through an eclectic variety of restaurants from Elements Restaurant in Muskoka to the iconic Fairmont Banff Springs Hotel in the Rockies. Scarfone received his first out of country exposure at Chicago’s world renowned Alinea, and then Heston Blumenthal’s Michelin-starred Fat Duck in the United Kingdom.

With his passion for travel, Scarfone proceeded to spend several months at luxury Read’s Hotel positioned on the beautiful Spanish island of Mallorca. Scarfone was inspired by the captivating trips to the vivid markets and the creation of bright, fresh dishes at the hotel’s Michelin-starred Relais & Chateau restaurant lead by Chef Marc Fosh.

As an avid hiker and lover of the outdoors, Scarfone became infatuated with Vancouver during a road trip which prompted his move to the ‘City of Glass’ in 2009, to experience the highly anticipated Winter Olympics in 2010. To further his exposure, Scarfone joined db Bistro Moderne, and Oru Restaurant located at the Fairmont Pacific Rim.

As an accomplished chef, Scarfone embraces the challenge of opening a new restaurant, and says of the opportunity, “I’m looking forward to managing the beast and harnessing the energy to create a loud and lively vibe.”

Celebrating the here and now, Nightingale delivers fresh and vibrant modern Canadian cuisine that’s designed for the way people want to eat today. Fresh vegetables and creative proteins are offered in a range of share plates that contribute to the fun, convivial atmosphere of the industrial-chic space. Located in a heritage building in downtown Vancouver’s Coal Harbour, Nightingale’s buzzing dining room is anchored by a focal bar that complements the compelling flavour profiles of the food with G&T on tap, an approachable wine list and a range of local craft beers.