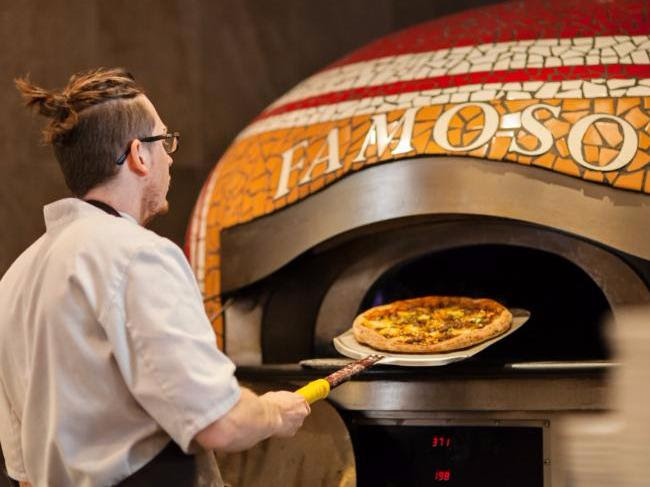 Famoso Neapolitan Pizzeria, based in Vancouver, British Columbia, today announced the grand opening of their 29th franchised location on Rochdale Boulevard in Regina, and the second Regina-based Famoso to open in as many years. This is the first of three locations opening up in Saskatchewan in late 2016 and early 2017, and marks another milestone in the rapidly expanding Canadian company.

Like the Famoso restaurants that precede it, the new location will feature a custom tiled bell-shaped oven imported from Italy, and make use of the freshest ingredients and authentic processes Famoso is known for when preparing their Neapolitan-style pizzas and other Italian dishes. Featuring an expanded menu that includes pastas and additional appetizers, visitors to the new Rochdale location will be able to enjoy the outdoor patio, an open kitchen concept, and a state-of-the-art centre bar with multiple high-definition TVs around it. The new restaurant hopes to also bring a boost to the local economy, with plans to employ approximately 50 people in the coming months to service the restaurant and its customers.

“The opening of Famoso’s second location in Regina is a testament not only to the popularity of Famoso in this community, but also to the hard work of owner, Chris, and his staff over the past year in preparation,” said Justin Lussier, CEO and co-founder of Famoso Neapolitan Pizzeria. “We’re immensely grateful to the people of Regina who have fully embraced Famoso and our authentic Italian traditions. We have no doubt that under Chris’ leadership, the new Rochdale location will thrive and flourish in the months and years to come.”

Chris Machin is also the owner/operator and general manager of Regina’s first Famoso location at Hill Centre on Scarth Street, and he will take on the same role with the opening of this location at 4450 Rochdale Boulevard. Machin’s expertise and passion behind Regina’s emerging food scene serves as the backbone behind the opening of the new location. This expansion is especially notable following the restaurant’s recent ranking at No. 105 on this year’s 28th PROFIT 500 definitive list of Canada’s Fastest-Growing companies, ranked annually by PROFIT Magazine and Canadian Business.

“To say we’re thrilled about the opening of Regina’s second and newest Famoso restaurant is an understatement,” said Chris Machin, owner and general manager of Famoso Neapolitan Pizzeria in Rochdale. “We’ve experienced such great success and so much love from the people of Regina at Famoso Hill Centre since the day it opened, and we have no doubt that we’ll receive the same warm welcome at our new location.”

Famoso Rochdale will officially open to the public at 5PM tonight, December 6, 2016. Diners can visit the restaurant on opening night at 4450 Rochdale Boulevard or make a reservation by phone at 306-789-3131. For a full list of restaurant locations, visit famoso.ca/locations.

About Famoso Neapolitan Pizzeria: Famoso is the neighbourhood pizzeria where you’ll find a fun and vibrant atmosphere any day of the week. It’s where great food and good friends make the perfect ingredients for a memorable night. Inspired by the energy of an authentic pizzeria in Naples, Italy, at Famoso you’ll find the delicious tastes of fresh, pizzaiolo-tossed pizzas and signature Italian dishes served with a perfect selection of wine, craft beer and cocktails. Visit Famoso online at www.famoso.ca.