It’s full steam ahead for Railtown Cafe as the popular counter-service restaurant has officially opened the doors on the first of three new cafe locations at 968 Howe Street in the heart of downtown Vancouver.

With the original Railtown location on Railway Street celebrating its fifth year in business, the company’s newest outpost occupies 1,700 square feet of space in a new LEED Gold-certified building that offers seating for 45 guests.

Open for breakfast, lunch and dinner from 7 a.m. to 7 p.m. Monday through Friday and from 9 a.m. to 5 p.m. on Saturday, the Howe Street menu features the same signature cuisine for which Railtown has become known: fresh-daily artisan breads, made-to-order gourmet sandwiches, soups, pastries and a build-your-own salad bar unlike anywhere else in the city. House-made ice cream is also available by the jar and cone as well as locally roasted coffee, cold-pressed juices and an array of local craft beer, wine and spirits. 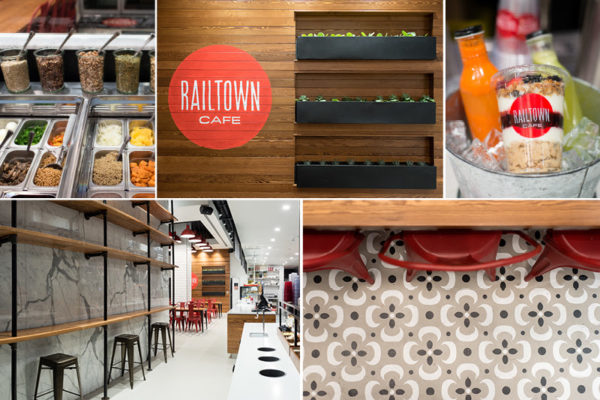 Originally launched in 2012 by chefs Dan Olson and Tyler Day in Vancouver’s historic Railtown district as a complement to the company’s successful catering arm, Railtown Catering, Railtown Cafe quickly caught on as a destination spot thanks in part to its trademark brand of healthy, made-from-scratch comfort food using only the best local, organic and seasonal ingredients and served up in heaping portions by Railtown’s talented team of classically trained chefs.

“This is an exciting new chapter in the Railtown story for both myself and Tyler, and our entire team,” says Olson. “We might be branching out and getting bigger, but we will always stay true to what has led to the growth of the Railtown brand — a commitment to featuring quality, handcrafted comfort food and offering a fun and friendly environment where guests can pull up a seat and feel at home.”

The Howe Street restaurant is the first of three new Railtown Cafe locations planned for Vancouver, with a second, 1,200-sq.-ft. space offering seating for 38 set to open at 1695 Main Street in early 2017 and a third, 1,800-sq.-ft. cafe with seating for 60 slated to begin service at 429 Granville Street in the spring of next year.

Further details on the two new Railtown Cafe locations will be revealed leading up to the opening of each restaurant.

ABOUT RAILTOWN CAFE (HOWE ST.) | Located at the corner of Howe and Nelson in the heart of downtown Vancouver, the latest addition to the Railtown Cafe family offers sit-down and take-out breakfast, lunch and dinner in a stylishly cozy and laidback counter-service cafe that brings together the best fresh, local and organic ingredients for a wide array of made-to-order gourmet sandwiches, handmade pastries and a build-your-own salad bar unlike anywhere else in the city. Originally launched in the Railway District of Vancouver’s Downtown Eastside in 2012 by chefs Dan Olson and Tyler Day — who own and operate the complemental event coordinating and catering business Railtown Catering out of the same facility — Railtown Cafe on Howe Street also offers a coffee bar featuring locally roasted beans, cold-pressed juices and an array of craft beer, wine and spirits.

For more information about Railtown Cafe or to stay up-to-date on the latest developments, go to railtowncafe.ca, become a fan of /Railtown Catering & Cafe on Facebook or follow @RailtownCafe on Twitter and @railtowncafe on Instagram.