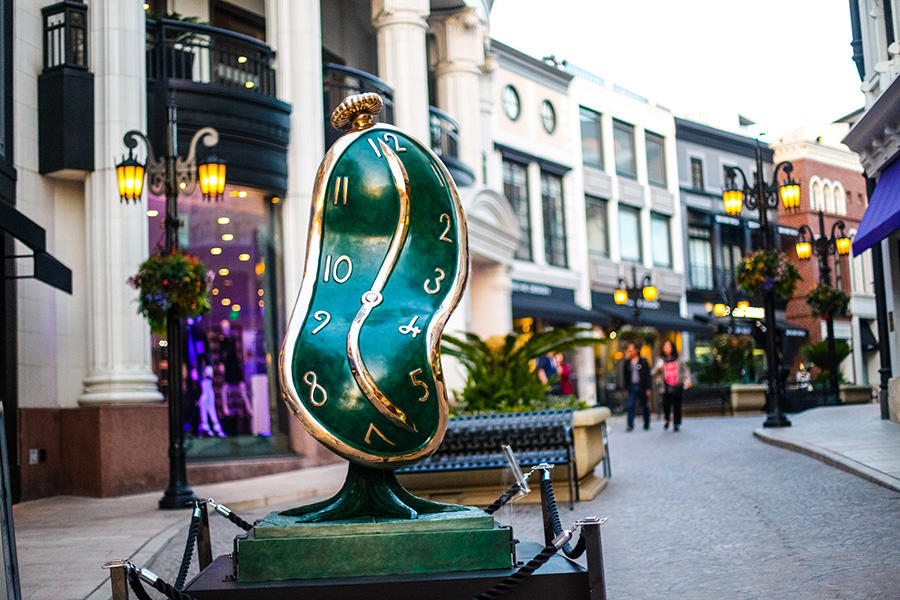 Chali-Rosso Art Gallery, Vancouver’s largest private gallery of original European Modern Master collections, today announced that it will temporarily gift the City of Vancouver with an original Salvador Dali three-dimensional, museum size, large scale bronze sculpture called Dance of Time l, valued at $750,000. This will be the first time that this sculpture has ever been displayed in Canada.

The official public unveiling of the seven-foot tall exhibit will take place on May 6, 2017 at 2 p.m. in downtown Vancouver at Lot 19 – West Hastings and Hornby Street. It will continue to be on public display, in an open environment until September 2017. For the duration of this “Definitely Dali project” presented by Chali-Rosso Art Gallery, public donations received, as well as a percentage of Chali-Rosso Gallery sales will go to Arts Umbrella, a non-profit arts education centre for young people located in Vancouver and Surrey, BC.

“We are thrilled to be able to bring one of Dali’s most theatrical museum size sculptures to Vancouver,” said Susanna Strem, Owner and Curator of Chali-Rosso Art Gallery. “We felt that this would be a great year to bring this unique “timepiece” sculpture to Canada in celebration of Canada’s 150th anniversary. Over the past 150 years, Canada has been influenced by artists from around the world, and Canada continues to embrace the multitude of creative forms from all cultures. I feel honoured to be able to share this time-depicting sculpture with Canadians.”

Dance of Time l is on loan from The Stratton Institute, a non-profit organization dedicated to the promotion of culture and the arts, and which possesses the world’s largest collection of Dali’s monumental sculptures. The Dance of Time I sculpture was conceived in 1979 and the first cast was created in 1984.

The sculpture exemplifies Dali’s controversial relationship with time, and the importance he believed to be inherent in memory. As Canadians reflect on the past 150 years during Canada’s 150th birthday celebrations, time and memory are topical subjects. The Dance of Time l symbolizes this evolution of time, and change that everyone can relate to.

As part of the Definitely Dali project, the Chali-Rosso Gallery has 100 additional original Salvador Dali artworks, including 20 gallery size sculptures, at their Howe Street location.

Dali’s Dance of Time l sculpture was previously exhibited at:

The Chali-Rosso Art Gallery was founded in 2005, and is located in the heart of downtown Vancouver – 549 Howe Street. The Gallery has a collection that is primarily focused on graphic works of the most well known Modern Masters, such as Pablo Picasso, Salvador Dali, Marc Chagall, Joan Miro and Henri Matisse. In addition, they also offer works by Rembrandt van Rijn, Pierre-Auguste Renoir, Edgar Degas, Édouard Manet, Andy Warhol and a variety of others.

All of the artwork at the Chali-Rosso Gallery is original, as they do not carry reproductions. Each artwork is accompanied by documentation and certificate of authenticity. Chali-Rosso Art Gallery is the authority on authenticating Modern Masters art works.