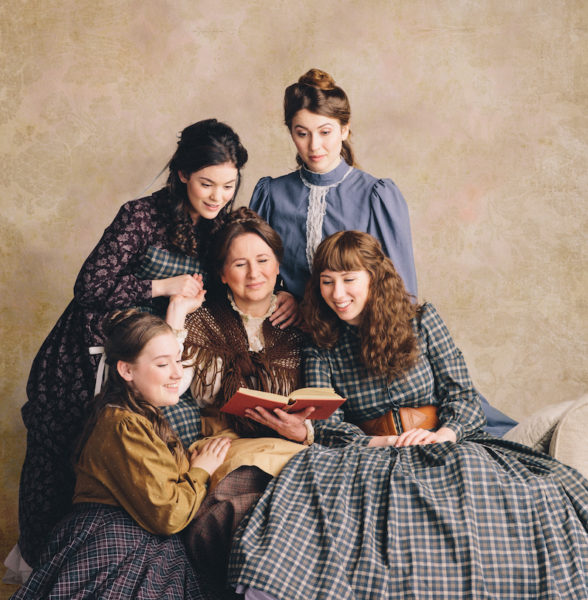 “While it is a classic of a different era, Little Women the novel cherishes family and celebrates strong, independent women – two ideals that are more important than ever in our current times,” says director/choreographer Lalainia Lindbjerg Strelau. “We are thrilled to brighten up the festive season for families of all ages with the joyous music of this Broadway hit and hope to inspire a whole new generation of Little Women fans!”

The lights came up upon the actress playing Jo March, in a New York boarding house, writing.  The story then unfolded at a quick pace as the March sisters transitioned to adulthood during the era of the civil war.

Although I have read the book many times, the musical version of the story (Conducted by Michael Creber) was new to me.  I enjoyed the cheerful musical score, lyrics and voice talents of the actors.

The costumes were in keeping with the time-period of the original story.  They reflected the characters’ social status: the March family dressed in neutral and modest clothes, whereas the wealthy characters were dressed more elaborately.  Amy’s costumes, after her return from Europe, for example, were beautiful and extravagant. Michelle Creber, who recently appeared in BOTCo’s 13: The Musical, and has won an Ovation Award for her performance in BOTCo’s FAME, gave an energetic performance as Jo March and closed out the first act with a powerful rendition of the song “Astonishing”.  The actresses playing the other March sisters, Ranae Miller (Meg), who last summer starred as Theatre Under the Stars’ loveable nanny in Mary Poppins, Jennifer Gillis (Beth) who recently appeared in Red, Hot, Cole! at the Roxy Theatre in Victoria, and Julia MacLean (Amy) who starred as Patrice in BOTCo’s 13: The Musical, all embodied their literary counterparts well.

Most of the much loved elements of the story, (For example, Jo’s scorched dress) remain intact, but the songs (The Fire Within Me) and script (Laurie falls off a gondola and Amy jumps in and rescues him) ensure that the production stands up to modern scrutiny.

However, the question remains, can this story, which explores the idea of four women coming into their own as creative, independent individuals, be as relevant today as it was when it was written in 1869?  After Jo and Beth left the audience in spellbound silence with their duet, “Some Things Are Meant to Be”, the answer can only be yes, and powerful and poignant as well.

The Grosvenor theatre itself is light and spacious.  The set arrangement, while trending toward the minimalistic, uses smart staging techniques, utilizing translucent curtains for depth and having the cast travelling every inch of the stage, keeping the audience engaged and allowing them to see the action.

Bring On Tomorrow Co, the company that brought Vancouver a talent-packed presentation of FAME in 2016, and more recently, 13: The Musical, will present this heartwarming holiday production: Little Women, Dec. 27 – 30 at the Kay Meek Centre. Ticket prices range from $25-$39.

Bring On Tomorrow Co. and Kay Meek Centre Warm Up the Winter Season with Little Women

TUTS – Cinderella – An Evening Of Magic and Joy!