Canadian Culinary Championships Competition #1 closes,
chefs prepare for final day of events.
The 2018 Culinary Championships closes off competition #1 with Chef Mike Robins, from Sous Sol in Winnipeg chosen by the 400 guests to receive the People’s Choice award. Chef Robins created a dish with some of the following ingredients: cold smoked halibut cheek and salt spring mussels, juniper berry, chantrelle mushroom, lobster bisque and cashew cream to pair with this years’ Mystery Wine 2016 Pinot Gris from Fort Berens Estate Winery in Lillooet, BC. The award does not affect the official judging scores to determine the 2018 Canadian Culinary Champion but it is a valuable win for Chef Robins.

“This is a great feeling, and motivation as we go into the final day of competition,” says Chef Robins.

The Mystery Wine Competition is the first competition in this culinary triathlon. The eleven competitors each won the Gold Medal Plates qualifying event in their respective cities and Thursday evening received a bottle of the unlabelled Mystery Wine. Chefs were then tasked with trying to identify what varietal the wine was and to create a dish that would pair well with the wine.  This morning Chefs went shopping in Kelowna.  The challenge was not only to present a dish that paired with the Pinot Gris wine but to also feed the 400 guests attending the event with a budget of $500. Some of the chefs are familiar with local suppliers and shops having visited the area in the past while others had not been to Kelowna before and arrived a few days early to explore the city and meet with suppliers.

David Lawrason, national wine advisor for Gold Medal Plates was instrumental in choosing the Mystery Wine for this year’s competition. “The Pinot Gris from Fort Berens, an emerging wine region in Lillooet, BC was a wine that was discovered when I was part of a media tour last year. The goal each year is to select a wine that will challenge chefs, guests and keep everyone guessing.” 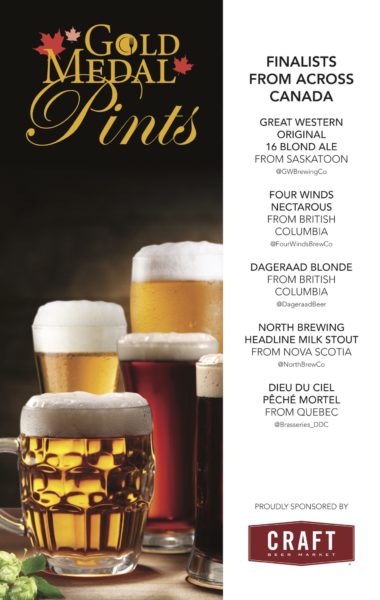 Stephen Beaumont, national beer advisor for Gold Medal Plates and co-author of the World Atlas of Beer had this to say about the beer competition, “We drank, we talked and all five finalists were very solid beers, we had a very hard time determining gold, silver and bronze, these were exceptional beers.”

The competition continues Feb. 3rd when the chefs take part in the challenging Black Box competition at Okanagan College starting at 8 am and then they close off the two day competition with the Grand Finale at the Delta Grand Okanagan Resort.  On Saturday night, three chefs will be standing on the podium.