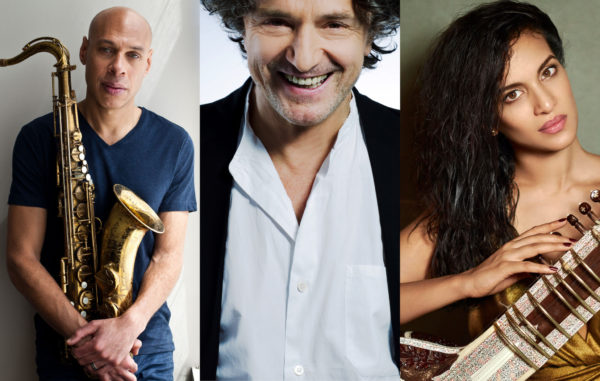 The Chan Centre for the Performing Arts at the University of British Columbia (UBC) announces its 2018/19 concert series,featuring powerful tributes, vibrant cultural expressions, and brilliant musicality in the Chan Shun Concert Hall. Over the course of eight concerts, wonderfully diverse musicians from all corners of the globe will share unique sounds and songs that have garnered international acclaim, including a Mexican mariachi icon, an ethereal folk trio, and legendary a cappella innovators. Also just announced is the 2018/19 Beyond Words series, featuring two incredible performances that focus on the transformative power of storytelling.

“As the Chan Centre enters its third decade, it is undeniable that there is a certain level of divisiveness on the global scale,” says Joyce Hinton, Co-Managing Director and curator of the Chan Centre Presents series. “At a time when the news is filled with international tension, it felt appropriate to place a particular emphasis on some of the most joyous music being created on the world stage. Whether it is the exquisite musicianship of Galician bagpiper Cristina Pato, the boisterous cheer of Goran Bregovic’s Balkan wedding band, or Ladysmith Black Mambazo’s uplifting songs and message of love, peace and harmony, our 2018/19 season is about offering audiences a different reality, of celebrating the distinct power of music to lift spirits and help unite us.”

I’M WITH HER
Sunday, September 30, 2018 at 7pm
A folk trio uniting the extraordinary individuals talents of Sara Watkins, Sarah Jarosz, and Aoife O’Donovan, I’m With Her have had their unique sound praised as “both ethereal and purposeful, a combination of searing musicianship and tender vocals” (The Guardian). Separately, these artists have founded renowned bands such as Nickel Creek and Crooked Still, and received a GRAMMY for Best Folk Album. Together, the female string musicians and vocalists blaze a new trail in American roots music.

GORAN BREGOVIC AND HIS WEDDING AND FUNERAL BAND
Sunday, October 21, 2018 at 7pm
Drawing on the traditional Balkan rhythms and soulful Romani folk tunes of his homeland, a concert with composer and bandleader Goran Bregovic is an experience in pure, unrestrained energy. Described as “a musical spectacle unlike anything else on North American stages” (San Francisco Chronicle), the high-octane artist, who has collaborated with such greats as Iggy Pop, Cesaria Evora, and Asaf Avidan, will make his Chan Centre debut with a program of all-time favourites and new songs from his latest album, Three Letters from Sarajevo.

JOSHUA REDMAN: STILL DREAMING
Tuesday, November 13, 2018 at 8pm
One of the world’s most renowned jazz saxophonists pays tribute to iconic jazz ensemble Old and New Dreams, of which his father Dewey Redman was a member. Joined by three of the most imaginative voices in contemporary jazz, Ron Miles on trumpet, Scott Colley on bass, and Brian Blade on drums, the combined quartet embarks on an uninhibited, unpredictable exploration of the free jazz of the 1970s and ‘80s.

BOBBY MCFERRIN: CIRCLESONGS
Sunday, February 17, 2019 at 7pm
Adapting and adopting musical vocabularies with joy and spontaneity, McFerrin is hailed with redefining the very nature of singing. His wholly unique career is highlighted by collaborations with artists from Yo-Yo Ma to Chick Corea, and the accumulation of 10 GRAMMY Awards. Joined by members of his a cappella group Voicestra and 12 local singers, the freewheeling Circlesongs highlights choral pieces based on irresistible grooves, spontaneously composed each night.

LADYSMITH BLACK MAMBAZO WITH HABIB KOITÉ AND BASSEKOU KOUYATE
Saturday, March 2, 2019 at 8pm
Five-time GRAMMY winners Ladysmith Black Mambazo were designated by Nelson Mandela as “South African’s cultural Ambassadors to the world”, and have been delivering a message of peace, love, and harmony through music for more than three decades. Before the nine-member a cappella ensemble hits the stage, a special first act will bring together Malian music luminaries: Ngoni lutist Bassekou Kouyate and guitarist Habib Koité.

CRISTINA PATO QUARTET
Thursday, April 11, 2019 at 8pm
“A virtuosic burst of energy” (New York Times), this master of the gaita (Galician bagpipes) shatters every concept of the instrument with a genre-defying fusion of Latin, jazz, pop, and contemporary music. Originating from Spain’s Celtic Galician region, the fast-paced innovator is a member of the Silkroad Ensemble founded by Yo-Yo Ma, as well as a skilled pianist, musicologist, and passionate educator. For her Chan Centre debut, she will be accompanied on stage by her spirited quartet featuring accordion, bass, and drums.

ANOUSHKA SHANKAR
Saturday, April 27, 2019 at 8pm
A virtuoso sitar artist, bold composer, and outspoken advocate for women’s rights and social justice, Chan Centre audience favourite Anoushka Shankar returns to share an evening of her dynamic and diverse creations. The daughter of the late Ravi Shankar, Anoushka continues and expands upon the innovations her father brought to classical Indian music. She will be joined by a gifted ensemble of instrumentalists for a program that includes classical ragas, as well as more contemporary cross-cultural explorations.

KEALOHA
Wednesday, October 3, 2018 at 7:30pm
Hawaii’s first official poet laureate, Kealoha drops a night of captivating spoken word and slam poetry in the Chan Centre’s intimate Telus Studio Theatre. The Indigenous artist graduated from MIT’s Applied Nuclear Physics program with honours, but ultimately decided his calling was to use his art form to speak out as a citizen of the modern world – and grapple with some of society’s most pressing issues.

CHAN CENTRE CONNECTS SERIES
The Chan Centre proudly complements their presentations with a thought-provoking outreach series, Chan Centre Connects. Through enlightening artist and expert talks, panel discussions, workshops, master classes, and film screenings, the series offers audiences a platform for more in-depth engagement with the season’s programming. The 2018/19 season will feature a continuation of the musical film series at The Cinematheque, as well as a hands-on puppetry workshop with the artists of Manual Cinema and much more. Chan Centre Connects events are updated online throughout the year at chancentre.com/connects.

Subscription packages will be on sale as of 12 noon on Tuesday April 24, 2018 and include complete eight-concert subscriptions as well as three-concert and six-concert packages.

Tickets and Subscriptions can be purchased in the following ways:

About The Chan Centre for Performing Arts at UBC (chancentre.com)
Since 1997, the Chan Centre for the Performing Arts in UBC’s Arts & Culture District has earned an international reputation for its striking design, stellar acoustics, and exceptional programming. Artists, critics, and patrons alike are unanimous in their praise of the facility, winning it a place among North America’s pre­­­­mier performing arts venues. The Chan Centre boasts three unique venues: the superb Chan Shun Concert Hall, the dramatic Telus Studio Theatre, and the intimate Royal Bank Cinema. From classical, jazz, theatre, and opera to world music, the Chan Centre is a vital part of UBC campus life where artistic and academic disciplines merge to inspire new perspectives on life and culture. Past performers and guest speakers include: Wynton Marsalis, His Holiness the Dalai Lama, Renée Fleming, Dan Savage, Yo-Yo Ma, Buena Vista Social Club, Sigur Rós, Mavis Staples, Trombone Shorty, The Blind Boys of Alabama, Chick Corea and Herbie Hancock.