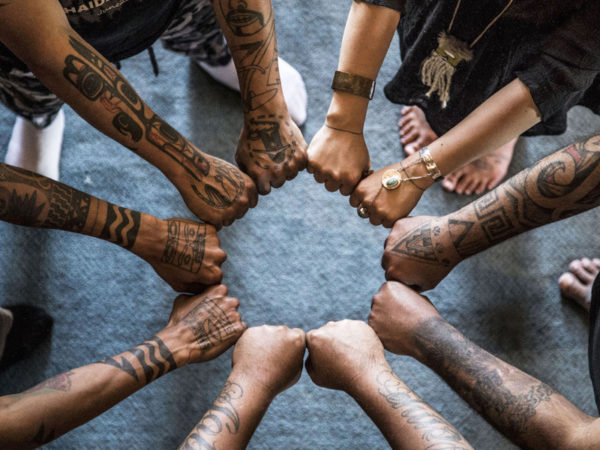 “Indigenous tattooing and piercing are deeply connected to the struggle and triumphs of Indigenous peoples,” says Kaszas. “The reclaiming of these practices is symbolic of our process of decolonization. Having a physical ancestral mark helps in communicating our identities and instills pride as we make ourselves visible as the original peoples of this land.”

For millennia, Indigenous tattooing and piercing have been central to ceremony and recognize special life events, potlatches, and social rank within Northwest Indigenous communities. After they were banned, these personal crests were transferred to clothing and jewellery. BODY LANGUAGEexplores designs on skin, and their relationship to traditional clothing, rock art, jewellery, basketry, and weaving. This exhibition will also reveal how these traditions, as they re-emerge, transcend mere decoration to provide healing, protection, and a profound sense of belonging.

Since 2012, Kaszas has helped spearhead the revival of tattooing in the Northwest of North America. He recently received his Masters degree in Indigenous Studies at the University of British Columbia Okanagan and co-founded the Earthline Tattoo Collective with Jordan Bennett (Mi’kmaq) and Amy Malbeuf (Cree/Métis) to enhance, expand, and support the work of traditional and cultural Indigenous tattoo practices. Dion Kaszas has also travelled internationally to participate and present on his own practice within the global revival of Indigenous tattooing.

Through this captivating exhibition, the following Northwest Indigenous cultural tattoo practitioners will examine the history, symbolism, oral traditions, songs, and artistry of Indigenous tattooing within their region:

Nakkita Trimble (Nisga’a): Born and raised in Prince Rupert, BC, Trimble began her tattoo career in 2012 and progressed into reviving traditional coastal gihlee’e as a means to reawakening the Nisga’a tattooing art form in her nation. Driven by her passion to learn more about Nisga’a art and culture, Trimble worked with Nisga’a Elders and undertook research to learn about and identify the significance of traditional Nisga’a tattoos.

Nahaan (Tlingit): Nahaan’s work reflects his teachings and cultural background. Practicing as a tattoo artist for more than five years, he focuses exclusively on working within the spirit and design style of Northern formline. As a carver, painter and designer he emulates the visual storytelling crafts so dear to his people of Southeast Alaska. He is a spoken word poet and helped found “Woosh Kinaadeiyeí” in Juneau Alaska, which has since grown into a thriving creative mainstay in the capital city. He focuses on the aspects of community empowerment and self-mastery through the methods of decolonization, indigenization and activism.

Corey Bulpitt (Haida): Bulpitt is the great-great-grandson of renowned artists Charles Edenshaaw and Louis Collison. He is known internationally for his fusion of hip-hop culture and Haida traditional style in large-scale spray painted pieces. He has created work for the National Gallery of Canada, Facebook Head Office in Seattle, and the Vancouver Mural Festival. Working with media as diverse as wood, argillite, gold, silver, glass, textiles, spray paint, and traditional Kiida (hand-poke) tattooing, Bulpitt has steeped himself in the traditional work of his ancestors, forming a foundation for his distinctive contemporary style.

Dean Hunt (Heiltsuk): Visual Artist, Traditional Tattoo Practitioner and Music Producer from Waglisla (Bella Bella), Hunt underwent a formal five-year apprenticeship with his father Bradley Hunt and older brother Shawn Hunt, where he learned the skills of Heiltsuk carving and design. He uses the tools his ancestors fought to hold onto through times of hardship and oppression, not only in his more traditional art practices, but also in his contemporary use of sound. Hunt studied Studio Engineering and Music Production at Columbia Academy in Vancouver. He also completed a four-week artist intensive at Earthline Tattoo Residency.

The contemporary artists represented in BODY LANGUAGE are at the forefront of the revival of Indigenous tattooing in British Columbia. Visitors will have the rare opportunity to learn the significance of and protocol around tattooing traditions, and explore the rich history and artistry of Indigenous tattooing, piercing and personal adornment on the Northwest coast.

To complement the exhibition, the Bill Reid Gallery is pleased to offer the following public programs:

Stitching Ourselves Back Together Symposium | Friday, June 8, 2018 | 9:30am – 4pm
Join us for a full day symposium exploring the history, revival and contemporary concerns around cultural tattooing. Registration required. Lunch included.

Live Tattooing in the Gallery | Saturday, June 9, 2018  | 11am – 4pm
Artists from the exhibition will demonstrate their techniques and chat about their process.

For more information about BODY LANGUAGE and special programs in support of this exhibition, visit:
https://www.billreidgallery.ca/blogs/exhibitions-page/body-language-reawakening-cultural-tattooing-of-the-northwest

About Bill Reid Gallery (billreidgallery.ca)
The Bill Reid Gallery of Northwest Coast Art is a public gallery nestled in the heart of downtown Vancouver. It is named after acclaimed Haida artist Bill Reid (1920 – 1998), a master goldsmith, carver, sculptor, writer, broadcaster and spokesman.