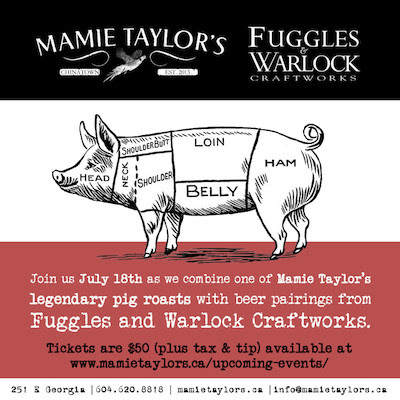 Mamie Taylor’s has teamed up with the guys at Richmond’s Fuggles & Warlock Craftworks for an old-time pig roast and beer dinner on Wednesday, July 18 beginning at 6:30pm.

Mamie’s perennially popular three-course suckling pig roast with all the fixins’ will be paired with five delightfully strange Fuggles beers, from the brewery that believes in “keeping beer weird.” Featured beers include Gin & Lime Pilsner, Strawberry Wit, and Destiny IPA, as well as two brews created especially for this event: “The Will To Ride” White Sangria Kolsch and the “Zen’ Yuzu Berliner.

Tickets $50 (taxes, gratuity and fees not included) and can be purchased thru Eventbrite.

ABOUT FUGGLES & WARLOCK CRAFTWORKS
Our motto is “Keeping Beer Weird”. We push traditional styles of beer to the limit, by adding a West Coast flair to our liquid. Expect some adventurous brews aimed toward adventurous palettes. The branding has a distinct focus on “Geek Culture” with references to video gaming and pop culture.

ABOUT MAMIE TAYLOR’S
At the vanguard of the Vancouver’s reinvigorated Chinatown culinary scene, Mamie Taylor’s is a modern American restaurant specializing in imaginative, regional comfort food with a killer cocktail list. We also have taxidermy.