VIFF – another film to consider… 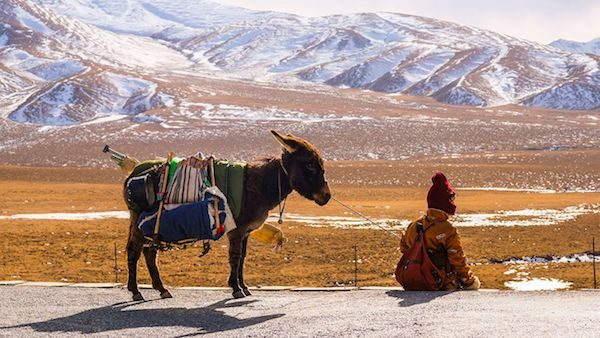 The following is another short review of a Vancouver International Film Festival 2018 option.

“Ala Changso”, a Chinese film which won the Grand Jury Prize for Best Screenplay in Shanghai this year, is enjoying its North American Premiere at VIFF 2018.

Beautifully set in the mountains of Tibet, the film is the story of Drolma (Nyima Sungsung), a peasant woman who discovers she is very ill and decides to make a pilgrimage to Lhasa. Her husband, Dorje (Yungdrung Gyal) is opposed to her making the journey. Even though she has not confided her illness to him, he knows she is unwell and believes that she will not be able to make the long journey, which includes wearing special clothing and prostrating herself every three steps.

Before leaving, she visits her parents and sees her son, Norbu (Sechok Gyal), who refuses to speak with her. She embarks on the journey and is eventually joined by Drolmas’s husband and son, who set aside their differences to set up camp every day and support her on her journey.

“Ala Changso” is a story of family, faith, interpersonal relationships and the acceptance of what the travelers understand to be predestination. It is a moving and tender glimpse into a very different approach to life than that experienced by the modern urban dweller.

“Ala Chango” is playing on Monday October 8th at 3:30 pm at SFU Goldcorp Theatre (149 W. Hastings) and on Wednesday, October 10th at 9:30 pm at Cineplex International Village (88 West Pender).

For a complete list of films and to purchase tickets on line, visit: www.viff.org