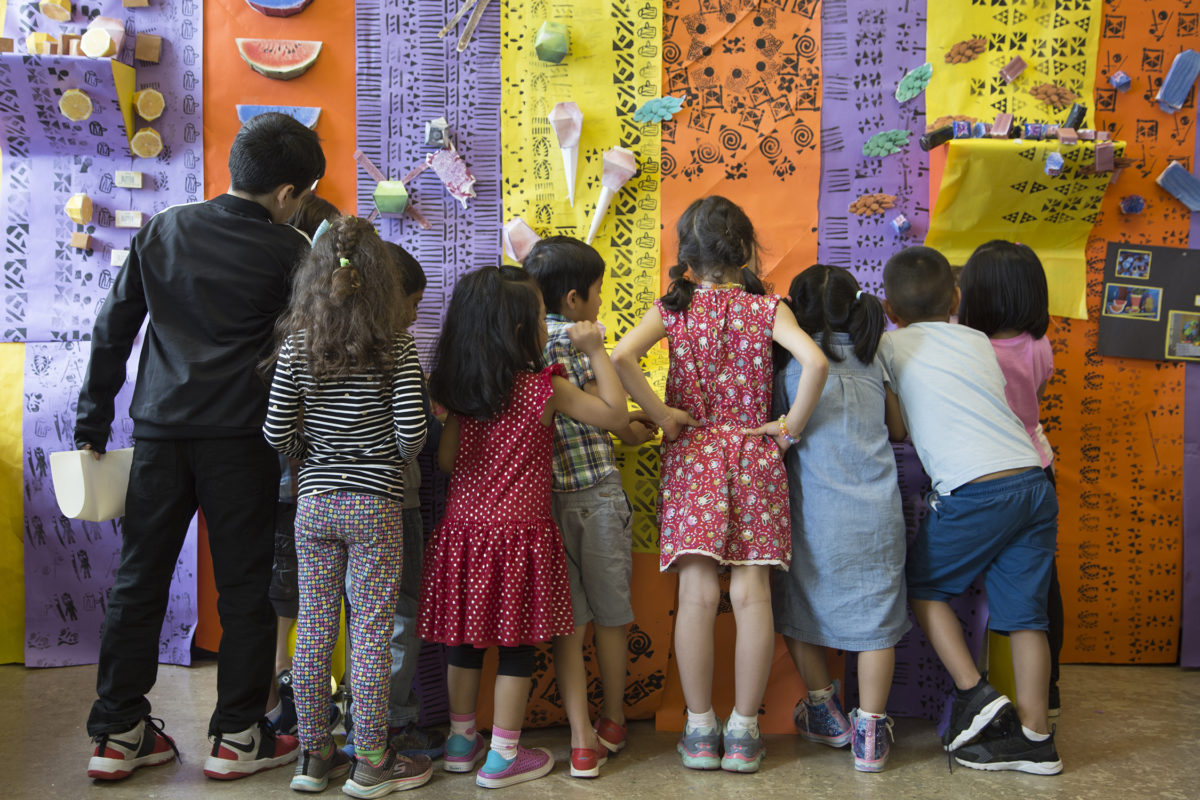 Artists Helen Reed & Hannah Jickling will launch a new public artwork commissioned by the City of Vancouver, QA CHEW’S BUBBLE TROUBLE, across top trick-or-treating neighbourhoods in time for Halloween. The gum was named for Queen Alexandra Elementary School, the home of the artists’ ongoing residency, Big Rock Candy Mountain, supported by Other Sights for Artists’ Projects. The limited-run artist edition gum was developed over the past 2017–2018 academic year in collaboration with the toughest taste-testers of all: grade 6/7 students. The release will coincide with the opening of the group exhibition Mouthfeel at Western Front, on display from November 1–December 15, 2018.

“We wanted our student co-creators to become sceptical consumers and also explore different flavour profiles,” said Jickling. Reed added, “In developing these edible projects, the kids learn about processes of production and the materials that comprise goods. Big Rock Candy Mountain doesn’t promote gratuitous candy consumption, but complicates the relationship to sweets as culturally defined objects of desire. We chose gum because it’s a difficult material: it’s sticky, messy, and even banned from public schools.”

The gum was developed through a series of classroom workshops with students, teachers, support staff, and guest experts such as food scientist Kathrin Wallace. The research compared texture, natural and artificial flavours, and gum ingredients such as sorbitol and xylitol. Gum was explored as an art material, a confectionery, and even as a public nuisance in the sense of stale gum stuck underneath desks and on sidewalks. The resulting QA CHEW’S BUBBLE TROUBLE contains a uniquely abstract blend of both fruity and sweet notes, with some sharp and earthy tones. Students have variously described it as: “Hello Kitty bubble bath,” “pungent,” and “mysterious.”

Mouthfeel at the artist-run centre Western Front will provide a contextual history to the commission, featuring several artworks that were shown to students during the gum’s research phase. This includes Dina Danish’s Brass Replica of Stone Age Chewing Gum (2013), Diane Borsato’s Artifacts in my Mouth (2003), and a number of Salt Licks, abstract forms created by cows who lick whorls into 50-lb cubes of salt and minerals used to provide them with essential nutrients. These surprising sculptures are presented at Whit Deschner’s annual Great Salt Lick contest, and are on loan from ranchers in Oregon.

QA CHEW’S BUBBLE TROUBLE will be sold at the gallery; chewing gum in the exhibition is encouraged. On Halloween, the gum will be distributed at select East Vancouver locations, in addition to homes across Mount Pleasant, Commercial Drive, and the Hastings-Sunrise area. The Western Front will serve as the main distribution hub on October 31, 2018, from 5pm–8pm. Further retail locations will be announced on the Big Rock Candy Mountain website.

Flavour historian and writer Nadia Berenstein will host a public talk on November 7, 2018, at 7pm in the Luxe Hall at Western Front. The event will discuss the past century of taste cultivation, including how notions of “natural” and “artificial” became measured, manipulated, and manufactured. Berenstein has written for The Guardian, New Food Economy, and Vice Munchies.

QA CHEW’S BUBBLE TROUBLE is commissioned by the City of Vancouver Public Art Program. Big Rock Candy Mountain is supported by Other Sights For Artists’ Projects, with additional support from the British Columbia Arts Council and the Vancouver School Board.

About Helen Reed & Hannah Jickling
Helen Reed and Hannah Jickling have been collaborating since 2006. Their projects take shape as public installations, social situations, and events that circulate as photographs, videos, printed matter, and artists’ multiples. They are currently fascinated with the contact high intrinsic to collaborative research, especially in their recent projects with children. Reed and Jickling have exhibited and performed internationally, with both individual and collaborative work, at The Portland Art Museum (OR), The Dunlop Art Gallery (SK), Smack Mellon (NY), The Vancouver Art Gallery (BC), and The Power Plant (ON). In Fall 2017 they released Multiple Elementary, a book that explores the elementary school classroom as a site of invention and reception of contemporary art practices, published by YYZBOOKS. Reed and Jickling are recipients of the 2016 Ian Wallace Award for Teaching Excellence (Emily Carr University of Art & Design), the 2017 Mayor’s Arts Award for Emerging Public Art (City of Vancouver) and the 2018 VIVA Award (Jack and Doris Shadbolt Foundation for the Visual Arts).