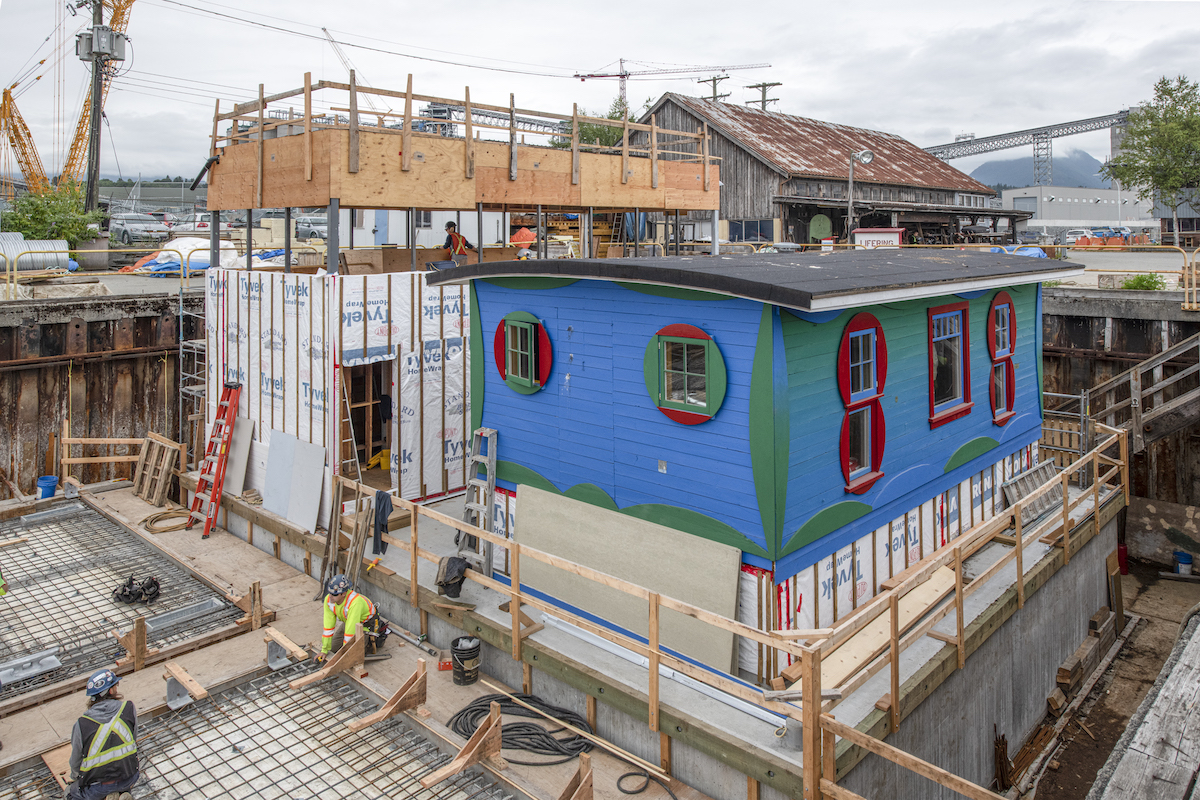 grunt gallery, Other Sights for Artists’ Projects, and Creative Cultural Collaborations (C3) are thrilled to announce the public launch and first open house of the historic Blue Cabin Floating Artist Residency on August 25, 2019, at the Plaza of Nations in False Creek. The yearlong inaugural program Skeins: Weaving on the Foreshore examines Coast Salish weaving practices and includes three research and residency periods by Angela George (Squamish/Tsleil-Waututh), Janice George and Buddy Joseph (Squamish), and Debra Sparrow (Musqueam). Australian Indigenous artist and activist Vicki Couzens (Gunditjmara) will be the first international artist-in-residence from September 15–October 31, 2019, presented in partnership with Australia Council for the Arts.

“The Blue Cabin is a culturally and historically significant work of architecture, and its launch in False Creek will encourage both artists and the public to appreciate the many complex histories that make up the community,” says Glenn Alteen, Blue Cabin Committee Member and Program Director of grunt gallery. “The cabin — and the broader region we now call the Lower Mainland — is inextricably linked to the colonial displacement of Indigenous peoples. As a heritage-focused project, one of our core values is to reflect and engage with the stories of the traditional owners of these lands: the Musqueam, Squamish, and Tsleil-Waututh Nations. Master weaver Buddy Joseph considers weaving a catalyst that entwines language, storytelling, and ceremony; we curated the inaugural program to pay our respects while bringing together diverse publics. As a floating structure, the Blue Cabin provides a new way for artists and the public to look at the city — from the water.”

“We are delighted to support the first Australian artist in the Blue Cabin Floating Artist Residency program,” says Dr. Wendy Were, Executive Director, Strategic Development and Advocacy at the Australia Council for the Arts. “Vicki Couzens is a First Nations multimedia artist and cultural leader who will share her arts practice and cultural knowledge in a unique and culturally significant location. This prestigious opportunity ensures that Australia’s highly respected First Nations’ arts, culture, and stories continue to be shared with new audiences across the world, and strengthens our deep connections between Australian and Canadian First Nations peoples.”

Skeins: Weaving on the Foreshore emphasizes engaged programming and intergenerational knowledge exchange, including workshops, classes, and presentations around weaving, language, and design. Each of the artists-in-residence brings to the program a long history of community involvement, reclamation, and activism. Couzens has led the resurgent practice of making possum cloaks and, as a Gunditjmara language keeper, is involved in linguistic training programs. Angela George, Janice George, Joseph, and Sparrow are each pivotal artists in the recent cultural revival of Coast Salish weaving in the 21st century. The local artists are currently undergoing eight-week research phases during which they will envision their project, followed by six-week implementation residencies at the Blue Cabin during fall 2019 and spring 2020.

Originally built in 1927 as a floating house in Coal Harbour, the Blue Cabin was re-located to North Vancouver for more than 80 years. Artists Al Neil and Carole Itter used the space as a studio from 1966 until their eviction in 2015, when the cabin’s site next to Cates Park was purchased by Polygon Homes. When the structure was scheduled for demolition, grunt gallery, Other Sights for Artists’ Projects, and C3 led a campaign to save, restore, and re-launch the cabin as a residency. Their success brought in artists Jeremy and Sus Borsos to repair the cabin and salvage its cultural history. In 2018, artist Germaine Koh and architect Marko Simcic were engaged to build a small 500-square-foot deckhouse; the energy-efficient structure features off-the-grid water and power systems.

The August 25 public launch will include the announcement of the Blue Cabin Floating Artist Residency’s first season of programming as well as tours of the facility, including the interiors of the Blue Cabin studio and the newly constructed sustainable deckhouse, every 15 minutes from 11:30am–5:30pm. Participants will be limited to 20 people per tour and will be first come, first served. Additional open house dates will be announced at the public launch. Mr. Bannock Indigenous Cuisine and Rico n’ Lalo All Natural Frozen Bars will be on-site serving food and refreshments.

Skeins: Weaving on the Foreshore features the following artists-in-residence:

Skeins: Weaving on the Foreshore has been assisted by Vancouver Foundation, the City of Vancouver Public Art Program, and the Australian Government through the Australia Council, its arts funding and advisory body.

About Blue Cabin Floating Artist Residency (thebluecabin.ca)
The Blue Cabin Floating Artist Residency is a unique initiative located on the waterways of Vancouver and comprised of a historic, restored squatter’s cabin and an energy-efficient deckhouse. Both structures are situated on a floating platform that can be moored around the Lower Mainland, offering artists the potential to create works that reflect on and reference the region and its many histories. In partnership with Canadian Metropolitan Properties Corp, the Blue Cabin Floating Artist Residency will be located at the Plaza of Nations on False Creek through September 2020. The presenting partner organizations — grunt gallery, Other Sights for Artists’ Projects, and Creative Cultural Collaborations — have a commitment to art that goes beyond gallery walls, engaging local communities and working in conjunction with the Musqueam, Squamish, and Tsleil-Waututh Nations on whose unceded lands we reside.