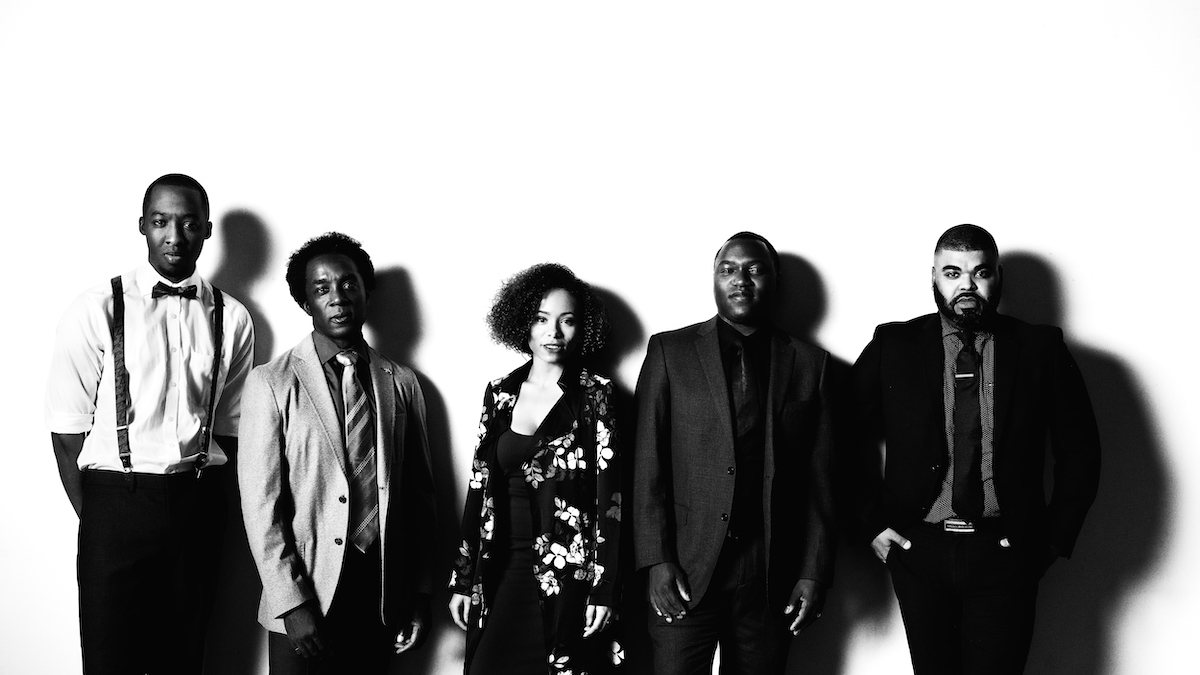 Young Jean Lee’s Provocative Play
The Shipment
The Firehall Arts Centre is thrilled to launch its 37th anniversary season with SpeakEasy Theatre’s powerful and provocative comedy, The Shipment, from Wednesday, September 25 to Saturday, October 5, 2019.
Written by Korean-American playwright Young Jean Lee, The Shipment is a subversive modern minstrel show about Black identity meant to wake the world to the ridiculous narratives in dominant media. Five Black actors – Andrew Creightney, Chris Francisque, Omari Newton, Adrian Neblett, and Kiomi Pyke – play a roster of characters that reads like a bad b-list of Black iconography: Video Ho, Crackhead John, Bad Cop, Standup Comedian, Drug Dealer Mama, Grandma from Heaven, and Record Company Executive, to name just a few. The brazen mash-up of these stereotypes with clichés, distortions, and brilliant sleights of hand all force us to go beyond the lampoon and shift the lens through which we perceive race in order to confront our own bias.
“Young Jean Lee is one of America’s most fearless and exciting playwrights,” says Firehall Arts Centre’s Artistic Producer, Donna Spencer. “In her writing, she is not afraid to tackle difficult subject matter and does so with humour and intelligence. When SpeakEasy Theatre first produced The Shipment, I was privileged to sit in a sold-out performance and watch the audience shift in their seats, uncomfortably, and then laugh out loud a few moments later. The work engaged them and made them consider. I am proud to share this playwright’s work and this talented company of artists with Firehall audiences.”
Garnering five Jessie Richardson Theatre Awards nominations and a Best Actor win for Omari Newton, The Shipment is biting satire at its very best.
“Bold, honest and hilarious.” – Vancouver Presents!  “…a surrealist collage.” – Colin Thomas
September 25 – October 5, 2019 |Firehall Arts Centre| 280 E. Cordova
Opening Night:  September 25, 7:30pmPreview:  September 24, 7:30pm

Credits for The Shipment
Written by:  Young Jean Lee
Performances by:  Andrew Creightney, Chris Francisque, Omari Newton, Adrian Neblett, and Kiomi Pyke
Directed by:  Kayvon Khoshkam and Omari Newton
Set & Costume Design by:  Markian Taraskiuk
Lighting Design by:  Itai Erdal
Produced by:  Markian Tarasiuk
For more information on the Firehall Arts Centre, please visit the following platforms:
Website: www.firehallartscentre.ca
Facebook: www.facebook.com/firehallartscentre
Twitter: www.twitter.com/FirehallArtsCte
Instagram: www.instagram.com/firehallartscentre
About Young Jean Lee:
Young Jean Lee has been called “hands down, the most adventurous downtown playwright of her generation” by the New York Times, “one of New York’s smartest, thorniest, and most knockdown hilarious playwrights” by The Guardian, and “one of the best experimental playwrights in America” by Time Out New York. She has written and directed nine shows in New York with Young Jean Lee’s Theater Company and toured her work to over thirty cities around the world. Her plays have been published by TCG (Songs of the Dragons Flying to Heaven and Other Plays, The Shipment and Lear) and by Samuel French (Three Plays by Young Jean Lee). She is currently under commission from Plan B/Paramount Pictures, Lincoln Center Theater, Playwrights Horizons, and Oregon Shakespeare Festival. She is a member of New Dramatists and 13P, and has an MFA from Mac Wellman’s playwriting program at Brooklyn College. She has received grants from the Foundation for Contemporary Arts, Creative Capital, NYFA, NEA, NYSCA, the Jerome Foundation, The Fox Samuels Foundation, the Greenwall Foundation, and the Rockefeller MAP Foundation. She is also the recipient of two OBIE Awards, the Festival Prize of the Zürcher Theater Spektakel, a 2010 Prize in Literature from the American Academy of Arts and Letters, a 2011 Guggenheim Fellowship, and a 2012 Doris Duke Artist Award. www.youngjeanlee.org
About SpeakEasy Theatre:
It’s with great urgency our present culture needs the live experience to help connect, question and remember why we are alive. SpeakEasy Theatre is committed to creating an environment where communities come together to celebrate. We are driven to foster stories created by diverse artists who are immediate, honest and unforgiving. www.speakeasytheatre.ca
About the Firehall Arts Centre:
Celebrating its 37th season, the Firehall Arts Centre continues to open doors through the arts in celebration of the Canadian experience. Located in a heritage fire station that was built in 1906, the Firehall Arts Centre is one of the most unique cultural institutions in Vancouver, hosting over two hundred performances each year and bringing diverse audiences together to enjoy, discuss, question, and explore artistic works that reflect the society and world in which we live. With Artistic Producer Donna Spencer at the helm, the Firehall Arts Centre produces and presents theatre that is innovative, eclectic and at times politically-charged, as well as exquisite, cutting-edge dance performances and interdisciplinary works that challenge assumptions. The venue also acts as a host to visual arts exhibitions and performances from other performing arts organizations, supporting local and national artists. The Firehall Arts Centre is proud to support emerging artists and companies, and strives to program work that is inclusive, culturally rich, and reflective of the many voices and perspectives in Canada. www.firehallartscentre.ca
Media release and image provided by Teresa Trovato, Trovato PR. Feature image: SpeakEasy by Jens Kristian Balle.
Something is wrong.
Instagram token error.
1