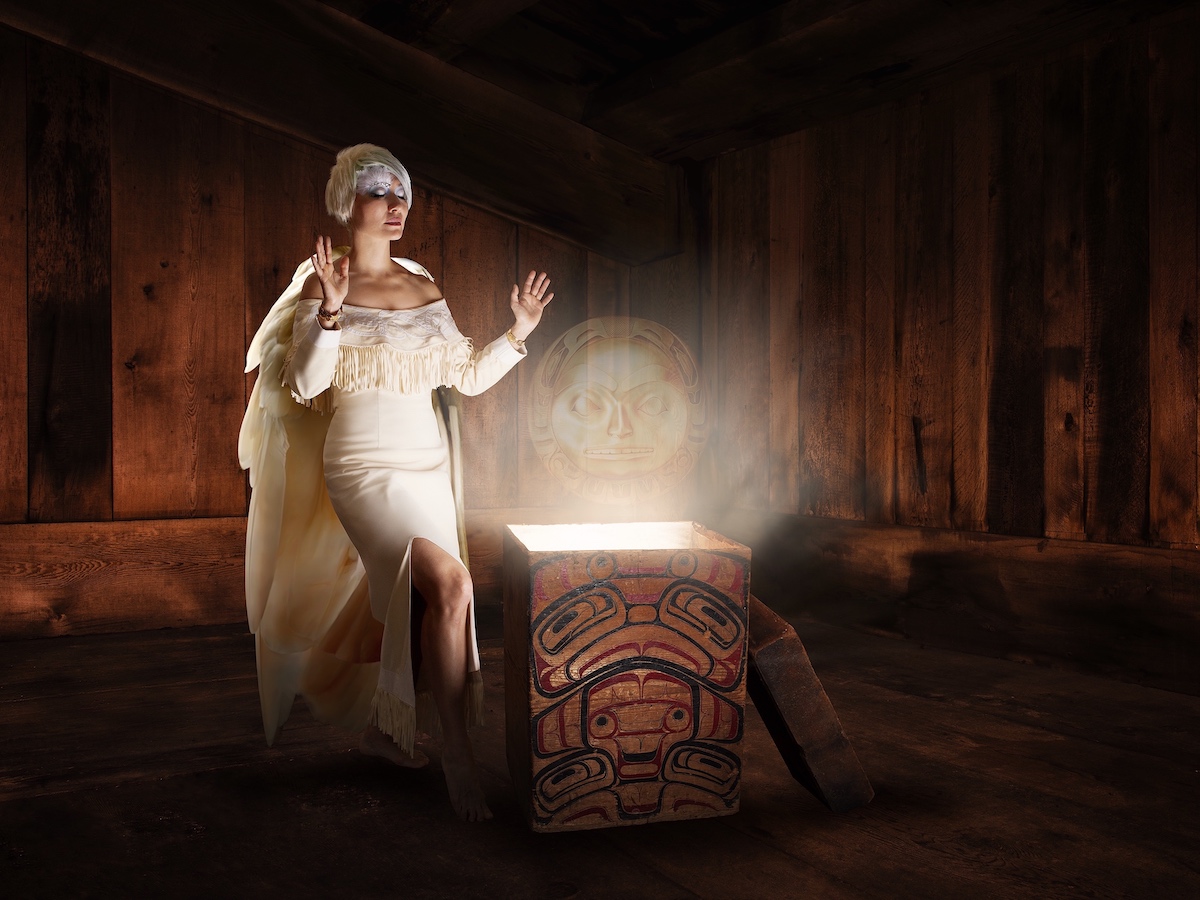 Bill Reid Gallery of Northwest Coast Art presents Out of Concealment from October 23, 2019–April 5, 2020, with an opening celebration on October 22 from 6–8pm. The Vancouver premiere of the solo exhibition by Terri-Lynn Williams-Davidson is an innovative re-imagining of supernatural beings from the oral traditions of Haida Gwaii. Curated by Beth Carter, in consultation with Nika Collison, Out of Concealment foregrounds an Indigenous ethos of environmentalism by honouring the power and sexuality of Indigenous women — inherent values that were disrupted and suppressed by colonization.
“Out of Concealment reinterprets ancient knowledge for a contemporary audience, introducing new ways of understanding the environment through timeless Indigenous oral traditions and ethnographic writings about supernatural beings,” says Carter, curator of the Bill Reid Gallery. “Traditional Haida beliefs have a balance of male and female forces and emphasize the interconnectedness of all things. Particularly in light of the recent #MeToo movement and the inquiry into missing and murdered Indigenous women, this exhibition shares important ancestral wisdoms key to unlocking the violences that have occurred against First Nations peoples.”

The exhibition shares vibrant representations of supernatural beings through photographic collages that combine contemporary fashion trends, traditional face painting from several clans including the artist’s (Gaagyals KiiGawaay, also known as the Skedans clan), and historic locations in Haida Gwaii. Many of the works feature subtle integrations of art by Robert Davidson, as well as Williams-Davidson herself as the subject. Some of the supernatural beings introduced in the exhibition include ‘Laa.a Jaad (Fine Weather Woman), who controls the Northeast Wind and is a Raven, and Jiila Kuns (Volcano Woman), a powerful ancestress of many Eagle lineages of Haida Gwaii.

Out of Concealment first premiered at the Haida Gwaii Museum in 2017, accompanied by an exhibition catalogue and full-colour publication by Heritage House Publishing. The Vancouver premiere will feature new sculptural works, including Plastic Woman, which is made of plastic found on the beaches of Haida Gwaii. The piece builds on the themes of the exhibition, drawing attention to environmental issues. Additional programming includes the book launch of Magical Beings, a new children’s book co-authored by Williams-Davidson and Sara Florence Davidson, on November 2 at 2pm, and the launch of a new oracle deck, Haida Box of Knowledge: Guidance from Supernatural Sisters written by Williams-Davidson and Sharon Blodorn, on November 30 at 2pm.

Williams-Davidson is an artist, musician, writer, and environmental lawyer. Born and raised in Haida Gwaii, she is a recognized keeper of traditions. Her work strives to open new vistas to her audiences rooted in Indigenous world views, Haida language and laws, music and oral traditions. She has helped preserve the legacy of Haida music through the Haida Gwaii Singers Society.

About Bill Reid Gallery (billreidgallery.ca)
The Bill Reid Gallery of Northwest Coast Art is a public gallery nestled in the heart of downtown Vancouver. It is named after acclaimed Haida artist Bill Reid (1920–1998), a master goldsmith, carver, sculptor, writer, broadcaster, and spokesman.

The Bill Reid Gallery offers educational programs for students of all ages, providing greater awareness and appreciation of Indigenous values and cultures, coupled with an understanding of how ancient knowledge can inform and impact their lives today. Find public programs at billreidgallery.ca.