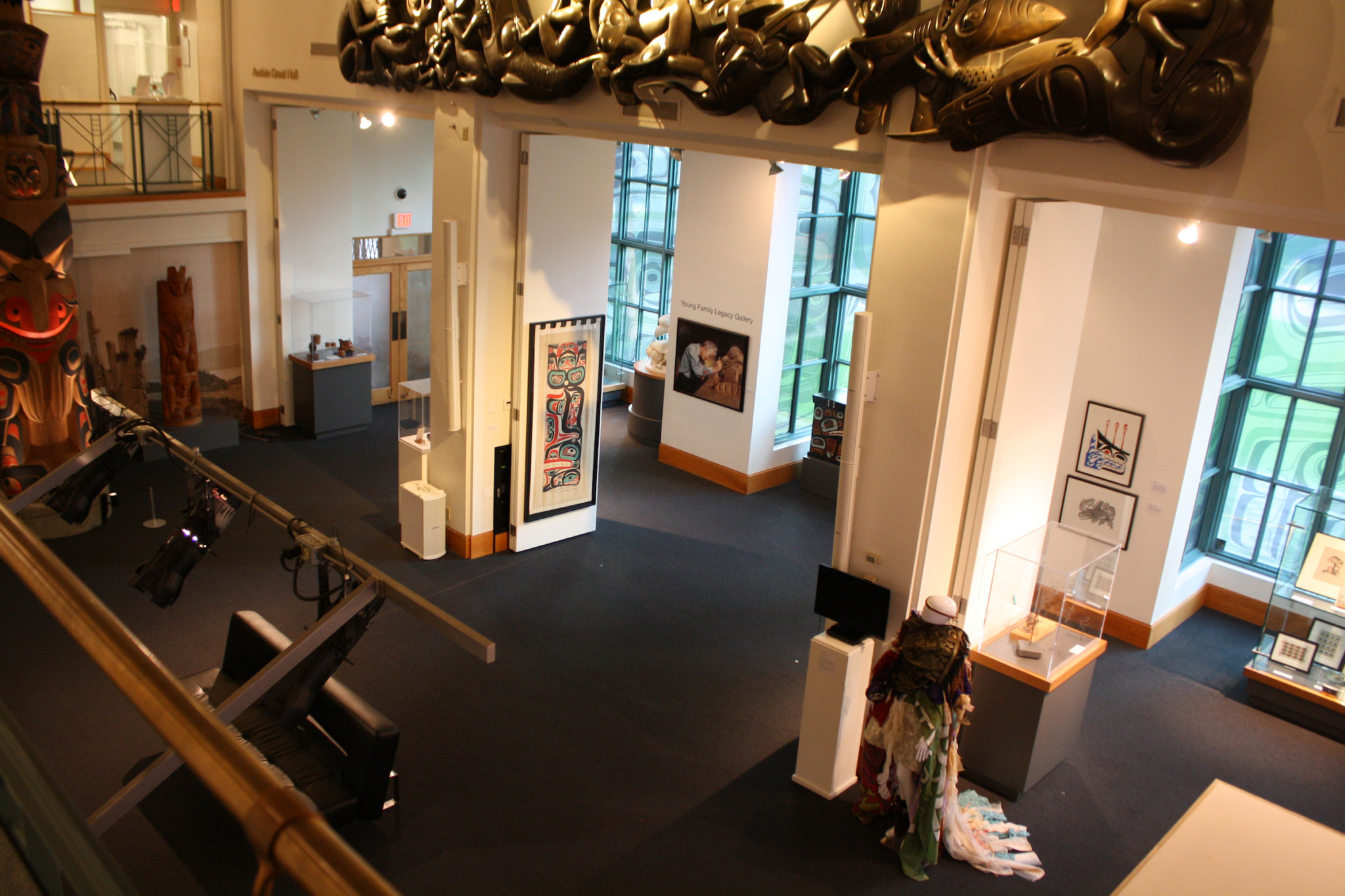 highlighting a universal relationship to water in a politically divisive moment

Bill Reid Gallery of Northwest Coast Art presents qaʔ yəxw – water honours us: Womxn and Waterways from April 10–October 2, 2019. The premiere group exhibition is guest curated by four members of the ReMatriate Collective — Tsēmā Igharas (Tahltan), Tiffany Creyke (Tahltan), Angela Marie Schenstead (nêhiyaw), and Denver Lynxleg (Anishinaabe) — and features nine Indigenous artists. The exhibition will also feature Audrey Siegl (Musqueam) as an important contemporary Water Keeper. The show honours the important role of Indigenous women on the coast, both past and present, in a timely investigation amid ongoing debates about pipelines and Indigenous rights. qaʔ yəxw is a hən̓q̓əmin̓əm̓ expression that means “water honours us.”

“This exhibition highlights womxn’s unique relationship with water as child bearers, healers, doulas, and other roles key to Indigenous matriarchal societies of the Northwest Coast as we are womxn and waterways,” says the ReMatriate Collective. “Water connects us all through the seas, rivers, and clouds, and is not bound by human-imposed borders. Through art, performance, and interactive programming, we explore water as a crucial element for all of creation, as well as its historical uses for survival and sacred cycles. In addition, the artists look at the excess of contemporary resource consumption as a threat to sensitive environmental and coastal ecosystems.”

Formed in 2014, the ReMatriate Collective is dedicated to strengthening future generations of Indigenous women through positive self-representation. Their work encompasses the dissemination of public visual- and text-based works and exhibitions, including social media photo campaigns and hands-on workshops on traditional practices and skill development. Their collective work has been featured at the Western Front (2016), Arts Underground in Whitehorse (2018), and the Morris and Helen Belkin Art Gallery at UBC (2018).

qaʔ yəxw – water honours us: Womxn and Waterways, features video, photography, carving, printmaking, beading, and performance by artists affiliated with various Indigenous peoples of the Northwest Coast and the interior of British Columbia. Each of the nine artists considers a unique experience with the life-giving element of water, and creates innovative works based on culturally specific practices:

Richelle Bear Hat (Blackfoot/Cree) is a Calgary based artist and a member of Siksika Nation and Blueberry River Nation. She graduated from the Alberta College of Art + Design with a BFA in 2011. Bear Hat’s artistic practice investigates ideas surrounding family relationships and the types of knowledge that are capable of being passed through them.

Lindsay Katsitsakataste Delaronde (Mohawk) was born and raised on the Kahnawake reservation. Delaronde is a professional multi-disciplinary visual artist who works in contemporary Indigenous performance and as a facilitator of traditional workshops, such as moccasin making, beadwork, and Iroquois corn husk dolls. She is currently the Indigenous Artist in Residence for the City of Victoria.

Alison Marks (Tlingit) was born and raised in Southeast Alaska. She studied under master artists David R. Boxley and David A. Boxley in Kingston, Washington. Painting, woodcarving, regalia, and digital collage are a few of the mediums the artist employs. Marks is committed to the revitalization of the Tlingit language and creating works for traditional and ceremonial use.

Dionne Paul (Nuxalk/Sechelt) has a Masters of Applied Arts at Emily Carr University of Art + Design. Her thesis research focused on traditional special effects in potlatch performances. Paul’s work creates a unique lens to view Northwest Coast art, and opens a window to new possibilities of art objects and the relationship to performance.

Kali Spitzer (Kaska Dena) is from Daylu (Lower Post, BC) on her father’s side and Jewish on her mother’s side. Spitzer is currently studying at the Institute of American Indian Arts in Santa Fe, New Mexico, and works with film — 35mm, 120mm, and large format. Her work includes portraits, figure studies, and photographs of her people, ceremonies, and culture.

Carrielynn Victor (Sto:lo) from the Chi:yom (Cheam) First Nation currently manages an Environmental Consultancy. Victor’s art is focused on maintaining Coast Salish design principles, while utilizing modern tools and mediums. Her work revolves around protection, preservation, and conservation of culture and the landscape.

Veronica Waechter (Gitxsan) grew up in Terrace, BC, on Tsimshian territory. In 2018, she graduated from Emily Carr University of Art + Design with a BFA, and soon after began working on totem pole carving with Gerry Sheena in different locations around Vancouver. Most recently, Waechter worked one-on-one under master carver Dempsey Bob.

The Bill Reid Gallery of Northwest Coast Art is a public gallery nestled in the heart of downtown Vancouver. It is named after acclaimed Haida artist Bill Reid (1920–1998), a master goldsmith, carver, sculptor, writer, broadcaster, and spokesman.

The Bill Reid Gallery offers educational programs for students of all ages, providing greater awareness and appreciation of Indigenous values and cultures, coupled with an understanding of how ancient knowledge can inform and impact their lives today.