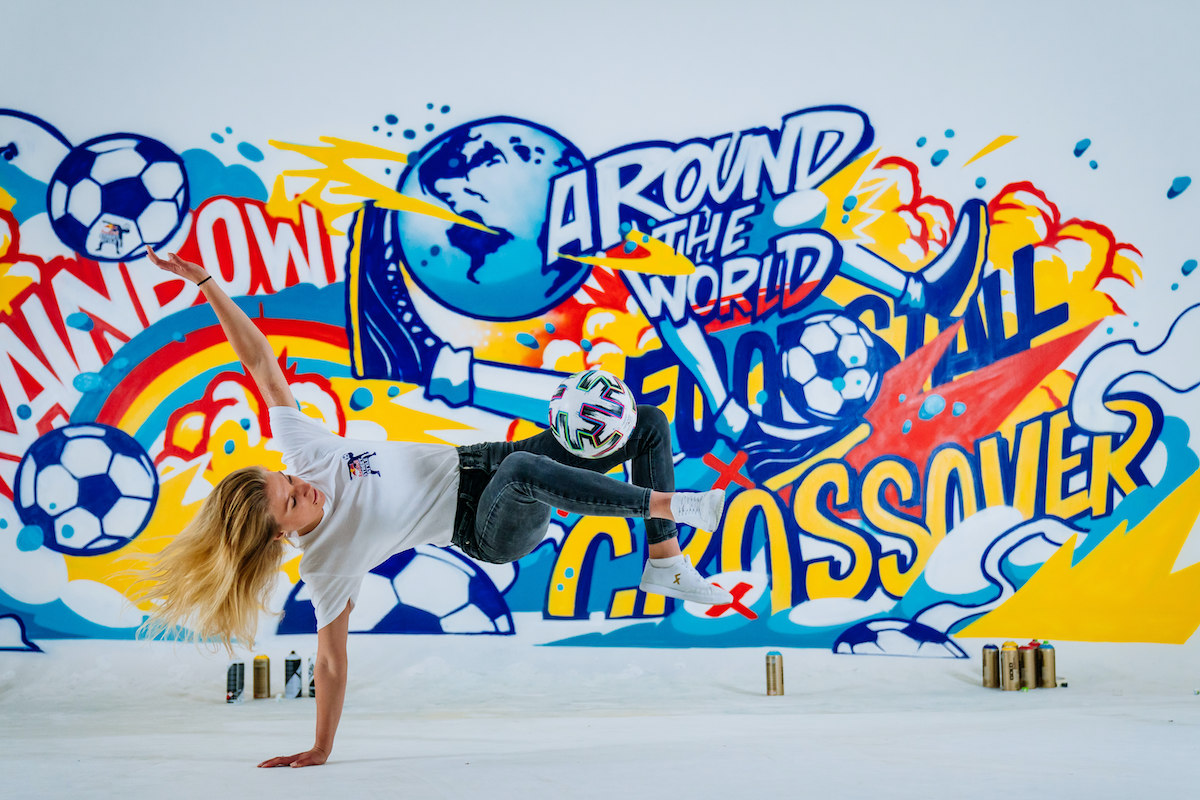 WANT TO GO AROUND THE WORLD WITH RED BULL STREET STYLE IN 2021? THIS MURAL WILL TRANSPORT YOU THERE

As an imaginative illustrator and street artist heavily inﬂuenced by comics, cartoons and popular culture Captain Kris said “It was exciting working with Aguska and taking on a new direction to the art piece was refreshing. Integrating football tricks, such as ‘Around the world’ and ‘Rainbow’, into the art piece was a natural progression of the collaboration, as a lot of my work is centred around pop art themed words, so it only felt right to include these in the football centred mural. Having her kick the ball against the wall to create paint splatters for me to work around added a whole new dimension to the mural, which is something I’ve never seen before”.

The mural took five hours to create and street artist, Captain Kris, who is famed for his distinctive work around East London, often freestyles when creating artwork, allowing his self-expression to create spontaneous additions. The same is true of freestyle footballers, as their self-expression is interpreted in their movements and tricks, which can be beautiful and unique.

Aguska Mnich explains “Red Bull Street Style is all about showing your best personal skills, so working with Captain Kris and using our talents to create a unique art piece together with the inclusion of freestyle football tricks was so thrilling. It is something I’ve never done before, but I enjoyed using my freestyle skills to help create this artwork”.

Aguska is considered one of the most well-known females in freestyle football, renowned for being a solid all-rounder with insane special football skills. She has some very strong lower moves which separate her from a lot of other female freestyle footballers.

The current men’s Red Bull Street Style World Champion Erlend Fagerli added “I personally love the concept of this, and seeing two completely different creative talents come together to create a mural that portrays both art forms is really cool”.

The contest has now launched so whether you are a reigning titleholder or a hungry newcomer to enter the Red Bull Street Style World Championship for your local offline or online qualifiers. The requirements are simple: For the offline qualifiers, go to www.redbullstreetstyle.com to register and participate on location. For the online qualifier, videos must be no longer than 60 seconds overall. They also must be in horizontal (landscape) format and without edits. No music is allowed. Everyone aged 16+ is welcome to take part.

This year, Red Bull Street Style has ibis budget on board as its new exclusive hospitality partner. ibis budget will actively follow the competition through the eyes of talented participating athletes on its @ibisbudget Instagram account, while sharing its passion for freestyle football, unveiling tips and sharing fun challenges with the freestyle football fan community.

ibis budget is a smart choice as a basecamp for spirited urban adventures. In-the-know world explorers appreciate the brand’s comfortable and intuitive design, Sweet Bed by ibis budget, and healthy and hearty breakfast buffets. At ibis budget, guests come together around their shared passion for urban sports, and enjoy fun, easy athletic pursuits to stay energized while on the road. For those with a taste for adventure and action, the hotels of ibis budget are conveniently located near major routes, airports and a growing number of city centers. ibis budget has more than 635 hotels in 20+ countries and is continuing to expand internationally. The brand is part of Accor, a world leading hospitality group consisting of more than 5,100 properties and 10,000 food and beverage venues throughout 110 countries.

Media release and image provided by Martha Robinson, The 10 Group.