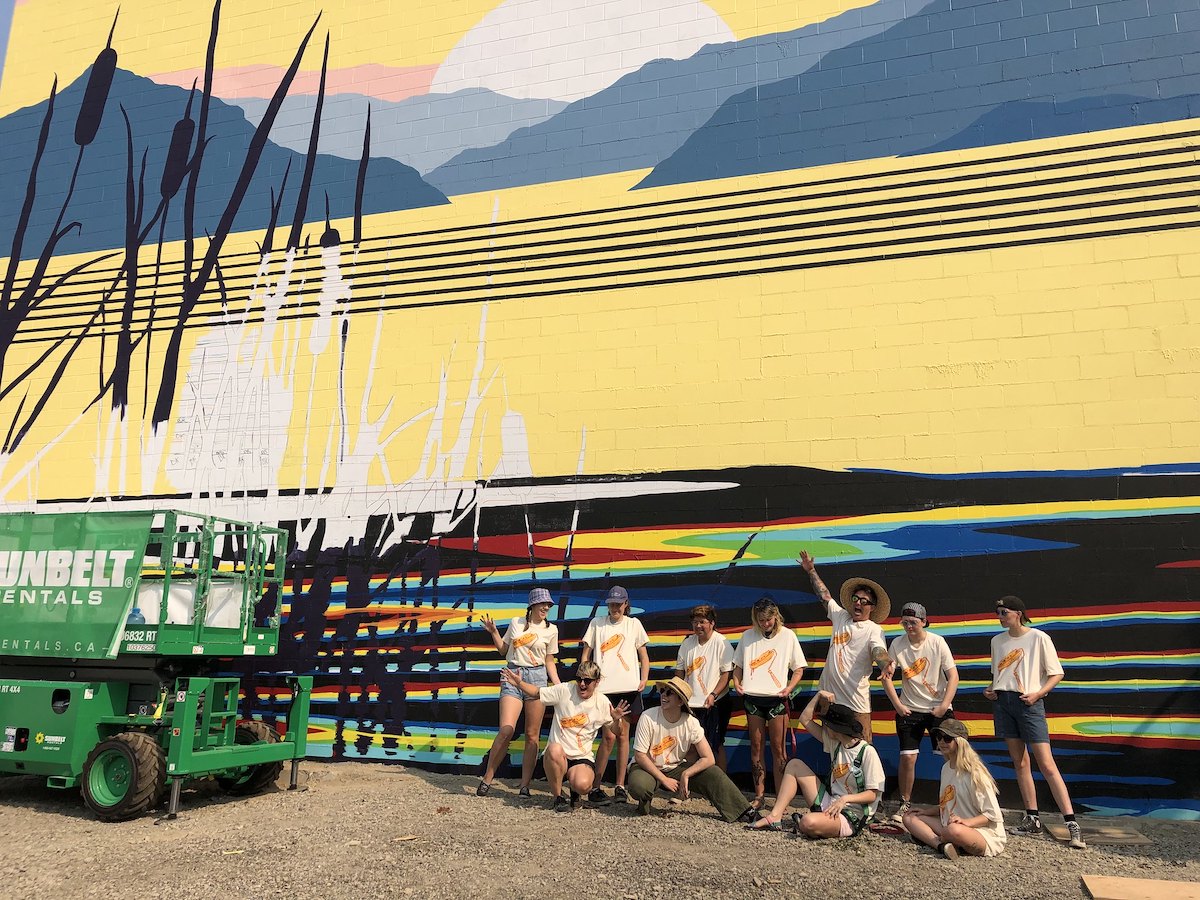 Students from UBC Okanagan’s Bachelor of Fine Arts program are once again working to create a mural in downtown Kelowna. Last summer, 18 students enrolled in the Faculty of Creative and Critical Studies upper-level visual arts course to create a mural on the outside of the CTQ building on St. Paul Street.

This year, the project is taking place again, right around the corner from that location. 10 students are participating with Instructor David Doody and his partner, UBCO Teaching Assistant Jorden Doody, to create a new mural at 1358 St. Paul Street.

While working out at the YMCA, Jorden would see the wall and noted how dreary it looked. She searched out the building owners and called them to propose a way to liven the space up.

“Jorden explained how grim the view was from the community gym and how we could transform it from an empty grey vacancy into a colourful window of imagination,” David explains.

During the academic course — which started in early July and runs to mid-August — students are led through the necessary steps to plan, pitch and paint a public mural. Students gain experience with projectors, mechanical lifts and a variety of paint applications and techniques common to large-scale artwork.

Murals have been recently popping up all over Kelowna — painted by many artists including UBC Okanagan alumni. Mural art revitalizes an urban landscape while supporting and improving the cultural, social and economic vitality of the local community, David explains.

“By creating exciting and energetic works of public art, we are transforming our communities into dynamic open-air art galleries,” he adds.

With this mural, the students hope to build a strong connection to the importance and fragility of the region’s local ecosystems. A blue heron is the central character, and David describes the heron as an ancient and beautiful bird that survives and thrives only when there are healthy fish stocks.

“By including the iconic beauty of our picturesque valley as the mural’s backdrop we hope to remind viewers that we are all living in a natural work of art,” he says. “With this design, we hope to pay homage and respect to the land and those who came before us.”

She explains there are a number of partnerships underway including one with Sunbelt Rentals. The company has donated the use of the lifts and provided safety training for all students for the duration of the course, something that is valued at more than $15,000. Meanwhile, CTQ consultants Ltd. has contributed a cash donation to purchase equipment and paint. And Dulux Kelowna and Golden Artist Colors NYC are partnering to support paint costs. Kenny estimates the overall value of donations to the project is roughly $45k — contributions that benefit the entire community.

“We are always interested in building opportunities for public art projects. They are great learning and enriching experiences for our students under the mentorship of a faculty member,” Kenney adds.

After having the opportunity to sponsor the first-ever mural class in 2020, CTQ was inspired to keep the momentum moving forward by once again sponsoring the course this year. The entire CTQ team is enthusiastic about the location of this year’s mural as it is just down the street from the original one created last summer, says Matt Cameron, CTQ founding partner.

“At CTQ, we strive to instill and encourage our neighbours and fellow business people to carry on this legacy by supporting the UBCO Creative and Critical Studies faculty financially and continuing the flow of mural art throughout the downtown core and beyond,” Cameron adds.

The painting was completed at the end of classes on August 12 with a special event to celebrate the mural is planned for August 19.

David Doody is currently a lecturer in the Visual Arts program, and a BFA alumnus from 2008. Jorden Doody is also a BFA alumna from 2008, and recently completed her Master of Fine Arts at UBC Okanagan. Together they run Fresh West Official and coordinate the Uptown Mural Project in Rutland.

UBC’s Okanagan campus is an innovative hub for research and learning founded in 2005 in partnership with local Indigenous peoples, the Syilx Okanagan Nation, in whose traditional territory the campus resides. As part of UBC—ranked among the world’s top 20 public universities—the Okanagan campus combines a globally recognized UBC education with a tight-knit and entrepreneurial community that welcomes students and faculty from around the world in British Columbia’s stunning Okanagan Valley.