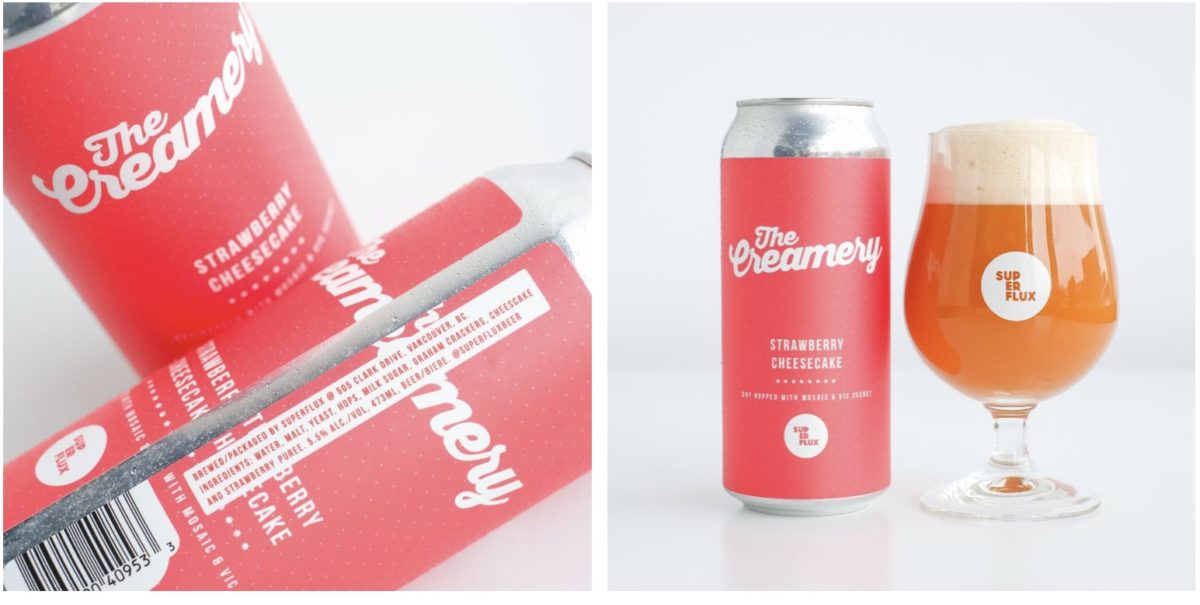 Some may say you can’t have your cake and eat it too, but in the case of the Strawberry Cheesecake version of The Creamery, you most certainly CAN have your cheesecake and drink it too! Made with strawberry and cheesecake puree, graham crackers and milk sugar, this beer is like dessert in a can and will satisfy that sweet tooth. While this beer does have some light dry-hopping, the purpose is to mimic some of the sharper notes of the cheese in a real cheesecake, not to add the level of hop character or aroma that an IPA would have.

SUPERLUX is an ever- evolving experiment in beer production and above all else, makes great beer. Adam Henderson and Matt Kohlen founded Superflux (originally known as Machine Ales) in 2014 after noticing a lack of hop-forward beers in the Vancouver market. After brewing out of different breweries in Vancouver, BC for more than 5 years, Superflux is opening its own brewery perfectly situated on Clark Drive in East Van.

With a line up of nearly 100% IPAs on top of out-of-the-ordinary experimental brews, Superflux makes beers even
non-beer people will love. It is innovative and unapologetic in everything it does, from the eye-catching labels it’s known for and the thirst-quenching beer inside to the out of this world hot dogs on the menu at the new brewery.

Superflux creates high-quality, hop-forward IPAs which make up nearly 100% of its lineup, with the exception of special release experimental brews and regularly collaborates with other breweries to create limited release beers. With rotating taps at the brewery and fresh beer available to-go from the retail store,the new brewery is where all things Superflux come full circle.

Superflux takes things outside the box whenever they can, which inspired a menu consisting of unique hot dogs you won’t find anywhere else, period. Working alongside food consultant Graham Marceau of Corduroy Pie Company, Superflux has orchestrated a menu featuring iconic hot dogs inspired by some of the founder’s favourite dishes, such as ThaiGreen Curry and Steak Oscar. With locally sourced and high quality ingredients, Superflux prides itself on creating combinations that pair perfectly with its beers.

Guests may come to Superflux for the beer and the hot dogs but they will stay for the experience. The beautifully designed tasting room is situated right in the open concept space, made to pique curiosity and because it
happened to work.

About Superflux Beer Company: Superflux is an ever-evolving experiment whose stated purpose is to “Do Cool Shit and Bring Happyness™”. The Brewery, Superflux Beer Company specializes in IPA and out-of-the-ordinary experimental brews, making beer even non-beer people will love. Innovative and unapologetic in everything it does, from the eye-catching labels, to the thirst-quenching beer inside. Superflux unleashed its first Vancouver brewery to its loyal following in 2020, after 6+ years of brewing with plans to expand with Superflux {Cabana}, a new restaurant in Victoria, BC in 2021. Visit Superflux online at www.superfluxbeer.com.

Information and images courtesy of Superflux.