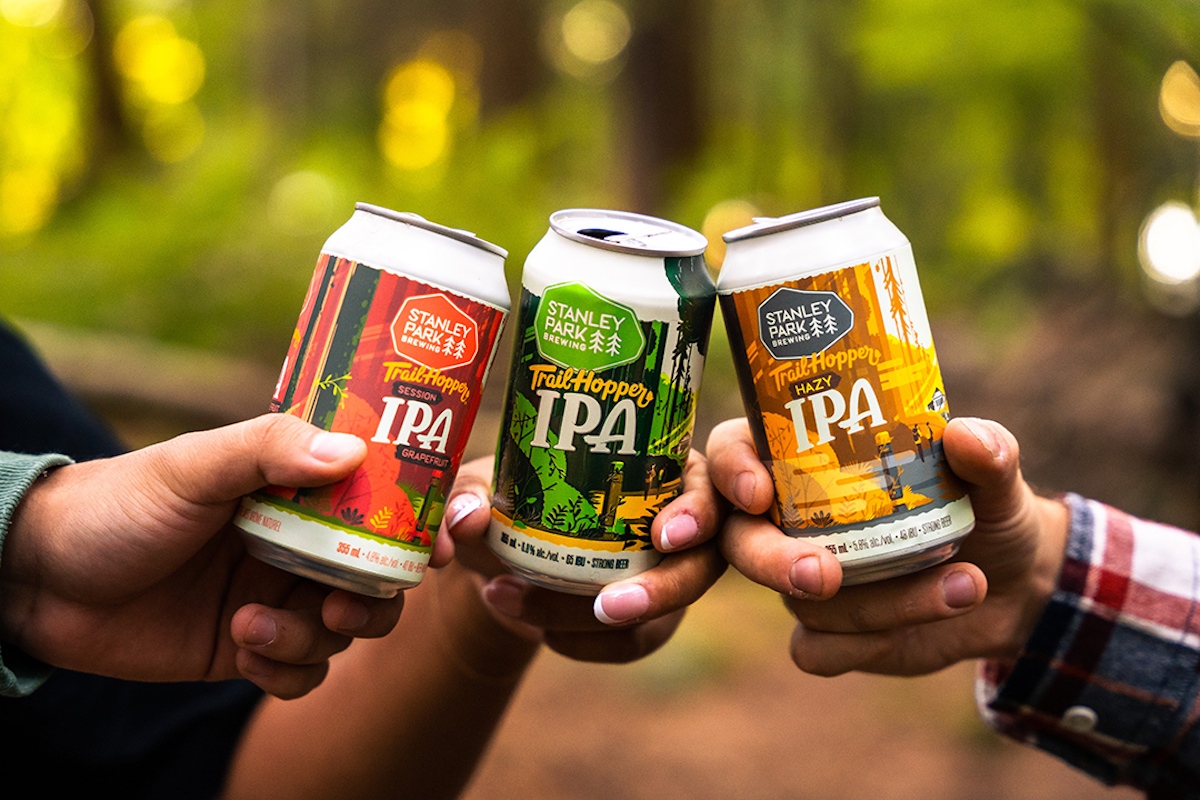 It is officially Fall and hazy days are just around the corner. This change in season also signifies when we move from summer salads to comforting chowders, from BBQs to Fall feasts and from lighter to fuller flavoured beers.

In a choose your own adventure format, this new mix pack brings with it the original Trail Hopper IPA (6.8% ABV, 65 IBU), a full-bodied and aromatic beer with notes of tropical fruit, pine and citrus with a bold flavour from its generous dose of Citra and Simcoe hops and a satisfying bitter finish. Dry hopped with Citra and Simcoe hops it has a distinctive west coast flavour balanced with a smooth malt profile, making it an adventurous but approachable West Coast IPA.

Next up it’s time to let your taste buds wander a bit with the Grapefruit Trail Hopper. Coming in at 4.8% ABV and 40 IBU this is a little lighter and more sessionable ABV than the others. This brew takes all the things we already know and love about the original Trail Hopper IPA and layers in pithy and juicy grapefruit flavours. Crisp, citrusy and refreshing – it’s the quintessential grapefruit flavours that balance the bold and hop-forward notes of the brew. Great for those who prefer a lighter, more citrus fruit forward beer.

Last, but definitely not least, the Hazy Trails IPA (5.8% ABV, 48 IBU) is perfectly timed for foggy nights and hazy afternoons. With the same base of Citra and Simcoe hops, this Hazy IPA gives a soft bitterness on the palate, With a medium haze, you’ll find more orange citrus notes on the nose for a beautifully balanced finish.

These super drinkable IPA styles are great sidekicks for the fuller flavour of fall meals. From full-bodied and satisfyingly bitter to juicy, aromatic, and sessionable, our new Hoppy Trails Mix Pack has the perfect hop-forward companion for your next adventure. Find the Hoppy Trails IPA Mix Pack now on the Stanley Park Brewstore, and a local liquor store near you.

New trails are calling! Which path will you choose?

ABOUT STANLEY PARK BREWING
As beer-crafters, we’re explorers at heart. We are inspired by the wonder of Stanley Park, and honouring our curiosity and seeking out new adventures is what we’ve always been about. From windstorms to daytrips to incredible sunsets best viewed from the beach, every beer we craft is a tasty tribute to Stanley Park and the experiences had within. And just like the park, we craft each one to be an exciting break from the everyday, an experience to be explored and savoured. In 2019, we opened our new Restaurant and Brewpub nestled in the heart of the Park. Situated just steps away from some of the best recreational trails and viewpoints in the city, the revitalized heritage building boasts two large outdoor patios, cozy and bright indoor dining rooms, a casual west coast-inspired menu and a rotating selection innovative beers brewed on-site, under the leadership of brewmaster Thom Riley. Let your taste buds wander as you experience one of the most unique brewpub settings in Canada. Stanley Park Brewing products are also available for sale in retail stores and in many of your favourite pubs and restaurants across British Columbia and Alberta. For more information, please visit www.stanleyparkbrewing.com.