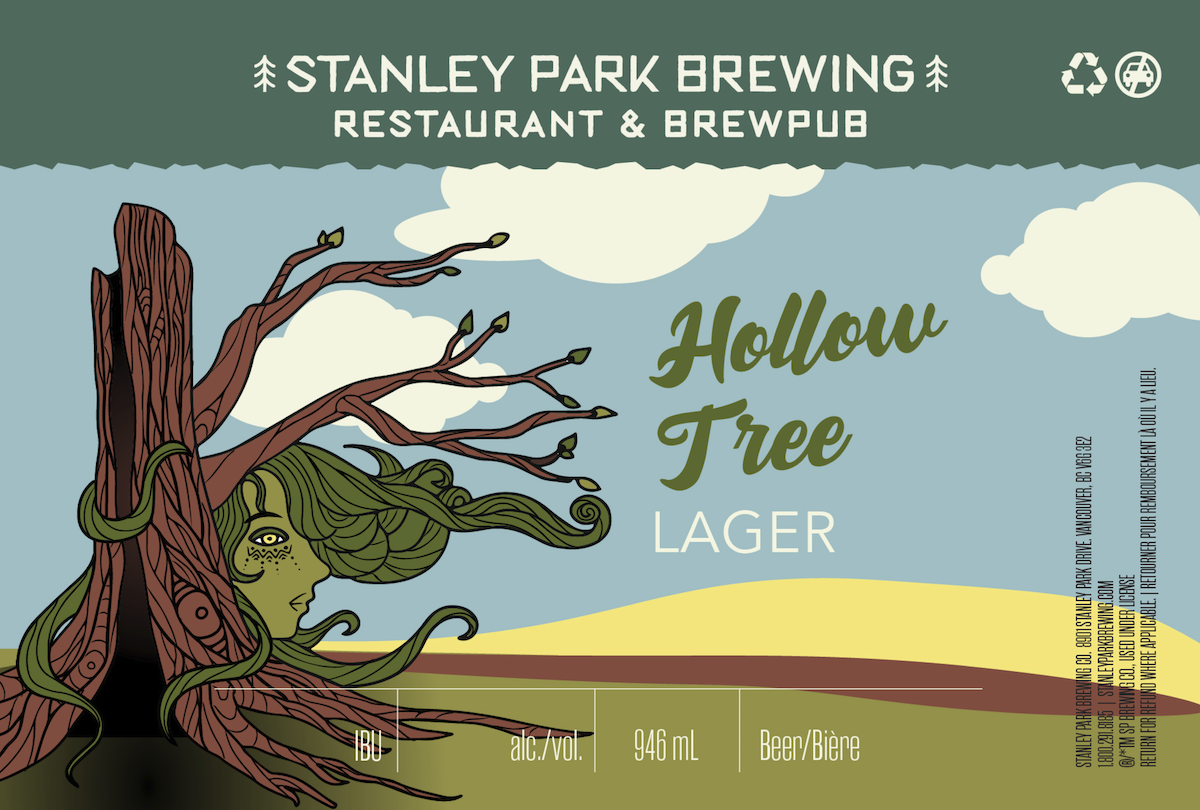 As Stanley Park is home to their eatery and SPES are the stewards of this park, it is a fitting relationship.  This relationship started with smaller event partnerships to ever growing fundraising initiatives. To mark Earth Day’s 50h Anniversary, Stanley Park Brewing has chosen to continue to celebrate in their own backyard.

In previous years Stanley Park Brewing has regularly participated in the annual Earth Day festivities hosted by the Stanley Park Ecology Society (SPES) within the park; unfortunately however, this year the on-site community engagement had to be forgone, yet the desire to support their friends at SPES remained. From this desire came the Earth Day Label Design Contest.

This contest helped bring the community together through art to help celebrate the 50th Anniversary of Earth Day on April 22nd, with the winning label being placed on a limited edition run of their best-selling brewpub beer, Hollow Tree Lager. For each Earth Day limited edition label Hollow Tree Lager sold, $1 will be donated to the Stanley Park Ecology Society (SPES).

Over 70 submissions from across the Lower Mainland were whittled down to 6 finalists, who were then voted upon by the public to give us our winner and runner-ups as follows:

The winner, Vancouver based designer and recent Emily Carr University of Art & Design graduate, Julia Kim, shared the following about the inspiration behind her winning design: ”Trees whisper to me whenever I walk through Stanley Park. They are alive; breathing, growing, communicating. To celebrate Earth Day, I created a design that represents an idea that existed from time immemorial. Mother Nature is powerful and she must be honoured and cherished.”

This program and subsequent dollars raised is just one of many programs that Stanley Park Brewing hosts throughout the year to support the Stanley Park Ecology Society. For example, their Windstorm West Coast Pale Ale, introduced in 2014, was created in honour of the thousands of trees knocked down in Stanley Park during the devastating windstorm in 2006. Partial proceeds from the sale of Windstorm go back to SPES. Since then, Stanley Park Brewing has donated upwards of $100,000 to the not-for-profit. With the most recent donation of $25,000 happening just a few months ago to celebrate the Ecology Society’s birthday in February.

For over 20 years, the Stanley Park Ecology Society (SPES)  – an independent non-profit charity – has supported the preservation of Stanley Park. Little known to Vancouverites, this small but mighty group is a leading Park Partner whose volunteers run conservation efforts, habitat restoration and wildlife monitoring, along with educating thousands through school and public programs. SPES also advises the Vancouver Park Board and provides baseline information on conservation issues within the Park, including ecosystem integrity, Environmentally Sensitive Areas and Species at Risk. Grants, private donations, membership fees and program revenues fund SPES, without whom they could not continue to do this great work.

Some of the key ways that the Ecology Society uses the monies donated by the brewery are:

Stanley Park is the heart of Vancouver, and our largest urban park. Full of wonder and breathtaking experiences, from brisk walks along the seawall to picturesque sunsets at the beach. But lately we’ve been cooped up in our homes, safely social distancing, missing out on the escape that the park offers… so this Earth Day (Wednesday, April 22), Stanley Park Brewing is introducing the Nature Minute! A series of videos to immerse you in the beautiful scenery and sounds of Stanley Park. Enjoy a moment of calm with Stanley Park Brewing every week at @stanleyparkbrew.