It was an exciting, but tense, evening as guests, competitors, judges, CAPS and IVDP members, and sommeliers attended the Award Ceremony cocktail and dinner of the Master of Port Canada 2022 competition at the Vancouver Club on October 12th.

The competition initially takes place by a series of four online webinars in which 76 professionals participated, followed by an online examination held in December, after which the ten top candidates were chosen. Those ten then continued their training, in Portugal, prior to the semi-finals.

The Master of Port Canada Semi-Finals and Finals took place on October 11th and 12th, 2022 at The Vancouver Club with five competitors in the finals.

The competition judges were: Manuel Lima Ferreira, Head of the Tasting Chamber at the Port and Douro Wines Institute, I.P. (IVDP, I.P.); DJ Kearney, journalist, wine consultant, and judge; Paulo Russell Pinto, Wine Educator and wine taster at the Instituto dos Vinhos do Douro e do Porto (IVDP); and Gabrielle Plastre, the first Canadian Master of Port in June 2019, and a sommelier at Chez Victoire.

The purpose of the evening was to announce and celebrate the winners of the semi-finals and finals of the Master of Port Canada 2022. After enjoying a selection of Port cocktails and canapés, dinner with wine pairings was served.

The three Finalists and the Winner of the Master or Port 2022 was announced following dinner, between the dessert and cheese courses, as the excitement mounted. 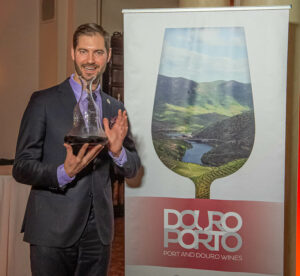 LEAGH BARKLEY Winner of the Master of Port 2022

Leagh Barkley is the Director of Restaurants & Bars at The Vancouver Club.

Born and raised on the West Coast of BC, Leagh moved to Bordeaux after completing his music and language studies and began a career in the wine industry. Six years later, Leagh returned to BC with the title of Best Sommelier of Bordeaux, the bilingual diploma of ASI, Association de la Sommelier Internationale, and experience working for Michelin-starred chefs in some of France’s finest dining rooms. 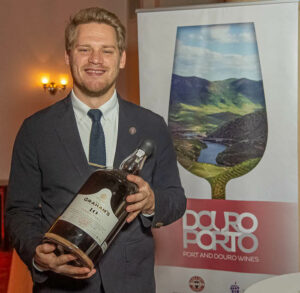 Nathan Hooper is a Certified Sommelier with the Court of Master Sommeliers. He currentlyworks at Grand Cru Deli and the Sommelier Factory, Canada’s premier wine school run by Bruce Wallner, MS. TheSommFactory trains industry professionals to become Certified Sommeliers and helps wineloving consumers to access and enjoy better wines. Previously, he worked at TreadwellCuisine as a Sommelier for 3 years.

Nathan is currently working towards his Advanced Sommelier Certification, and enjoys any wine competition or wine exam he can get his hands on. He also enjoys playing golf and drinking chartreuse based cocktails. 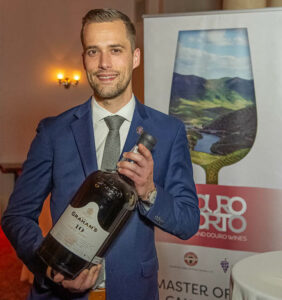 Recently, Alexandre obtained his Level 3 Award in Wines from the Wine & Spirit Educational Trust (WSET) and is a candidate for the Advanced Sommelier examination of the CMSA, which will take place in summer 2022.

He is delighted to be a candidate for the Master of Port 2022, which has given him a great opportunity to further learn and develop.

History of the Master of Port competition

Master of Port is a prestigious title awarded to professional sommeliers. The competition was born in France in 1988, and over the course of 18 editions, more than 1400 candidates have taken part in the competition. It is a competition that aims to promote the training of one of the most important segments of professionals, and with its remarkable growth in size and popularity, it has established itself as one of the important steps in the election of the “Best Sommelier in the World”.

The Master of Port winner becomes an ambassador of the Port brand and, therefore, is recognised by the sector as a specialist and representative of the excellence that makes Port one of the best wines in the world.

The selection process for the sommelier who will succeed Gabrielle Plastre, winner of the 1st edition of the Master of Port Canada competition, a joint initiative of the Instituto dos Vinhos do Douro e do Porto (IVDP) and the Canadian Association of Professional Sommeliers (CAPS/ACSP), took place in the last quarter of 2021. During this first phase , the IVDP held four webinars, in English and French, which covered various theoretical and practical aspects of Port Wine. 76 professionals took part and, in December, the online exam took place to select the ten best competitors, who were invited to continue their training, this time in Portugal, in 2022, to carry out the selection tests for the semi-finals. Port and Douro Wines Institute (IVDP)  SommeliersCanada

Quality is an expression of the distinctiveness and uniqueness that is guaranteed and approved by the Port and Douro Wines Institute, created in 1933 as the Port Wine Institute.

Binding specifications, rather than a regulatory standard of global reference, approved by the Interprofessional Committee of the IVDP, translated the will of the winemaking community in the region. Compliance with the specifications is enforced by the control and certification body – the IVDP.

It is the Institute that upholds the control of the quality and quantity of Port and Douro wines, regulating production as well as protecting and defending the Douro and Port designations of origin and the Douro geographic indication worldwide.

Global ambassador for Port and Douro wines, the IVDP is a public body, one of the government’s indirect administrative organizations, with nationwide jurisdiction. It is overseen by the Minister of Agriculture. Port and Douro Wines Institute (IVDP)

With special thanks to Louisa Maria Fry, Port and Douro Wines Institute (IVDP) for her assistance and information that made this feature possible. Also thank you to Domee Rafael, The Manitoba Club’s Food and Beverage Aficionado/Sommelier, the Vancouver Club for a delightful evening and John Lau @johnlaujohnlau for sharing his photographs. Feature image courtesy of Vinhos do Douro e do Porto The dinner was complimentary for me and one guest. Read the Master of Port 2022 Cocktails and Dinner feature here. #sponsoredpost

The Best Sommelier of Canada, 2017 is Carl Villeneuve-Lepage