This past weekend marked the 23rd anniversary of The Wellness Show Vancouver, a high-energy event that emphasizes healthy living and kindness to oneself, each other, and the environment. Pre-convention, I was given the fabulous opportunity to discuss ways to keep our kids healthy with The Green Mama, Manda Aufochs Gillespie, who presented a workshop on the Saturday titled Green Parenting 101:

Jennifer: Manda, you’ve been on the scene as a source for green alternatives in regards to children and their environment for over 20 years. How has your perception of “green” changed during that time?

Manda: I was lucky, early in my career, to get to work on some important and interesting projects such as one of the country’s first green buildings on a college campus that featured things like a living machine and the capacity to generate more energy than it used. I managed one of the first urban ecovillages in the country, and I helped on a multimillion dollar urban redevelopment project. From early on in my career, I got excited about the realization that the green movement was a movement of possibility. There are lots of problems, but the potential of the green movement, is to see the world holistically so it actually becomes about solutions that work for people, the planet, the economy, and beauty.

I still look at the world as an ecological designer—seeing possibilities. As I became a parent, however, I have realized a sort of simplicity of terms. There is no greater indicator of what is at stake today, whatever words or names you give to the problems—obesity epidemic, failure of the schools, climate destabilization, GMOs OMG, toxic overload, health crisis— than the health of our children. I get upset when I hear people refer to “environmentalists” being considered when talking about the repercussions of tracking, climate, uncontrolled toxins in consumer products. Environmentalists? Ha! It’s parents and children that are concerned. It’s grandparents, librarians, and teachers. It’s all those who are invested in a future for human-kind. It’s about the health of my kid and your kid. 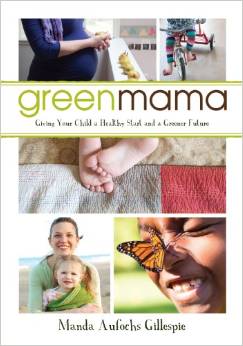 Jennifer: You recently had your first book hit the shelves! Congratulations, and how does that feel? (Many authors compare having their first book published to conceiving a child…would you agree?)

Manda: Oh, Yes! To me the first book was like having my first baby. I thought, while I was writing the first book, that I was doing the hard work. Even though all my author friends said, “Just wait! The work really begins once it is published!” I didn’t really believe them. Just like I didn’t really believe people who said that I would be more anxious once the baby was born. However, as usual, my friends were right! The thing about writers is that we know how to write. I didn’t know ANYTHING, however, about how to be my own publicist, tour booking agent, and promoter. At first, I felt bad about myself all the time. “I did it all wrong! Nobody came to this event! Too many people came to that event and I hadn’t prepared the right kind of remarks! I double booked myself! I forgot to organize my kids birthday because I was too busy being “on tour”! You get the idea. It’s just like being a first-time mama: it’s easy to feel inadequate. So, I am practicing giving myself a break, just like I tell new moms to do.

Jennifer: In your opinion, what is the number one thing parents can do to improve their family’s environment?

Manda: The most important thing a parent—or anyone—can do is be curious. One of the awesome things I learned in researching my book is more about the brain. The brain of new parents is really incredible—the largest growth the brain grows through after the childhood years happens to new parents. Overnight, they develop millions of new neurological pathways. (That’s just a fancy way of saying “habits.”)  Parents are built to build new habits faster and more easily than any other time in their adult life, and it doesn’t matter what they do, as long as they do something to better the health of their child (and thus the planet). Doing that something will lead to them believing more in the possibility of health for their child (and thus the planet), and it will lead to more action.

Jennifer: What would you say is the most careless mistake the majority of parents make when it comes to our kids’ health?

Manda: The biggest mistake parents make is to give away their own authority. No one knows better what their child needs than a caring parent. Unfortunately, we as parents give away that power all the time—we give it away to doctors, companies, health agencies, governments, teachers, experts, technology—and to our own irrational worries. Parents are scared all the time. Parenting is hard work. It takes courage. Only a mother or father willing to take on their authority stands a chance, but everything is set up against them. It’s as if we are telling ourselves that if we give the responsibility for the wellbeing of our child over to others, we won’t worry as much. Well, it’s not true. We will always worry, but we can learn to worry smarter once we take our full authority.

Jennifer: How would you recommend attempting to change an older child’s diet from a typical “western diet” to a more healthful one?

Manda: Just start now! If you are a parent reading this and your children are young, then you most tell yourself that it will NEVER be more important, or easier, to get your child eating healthy. It is easy to believe that you can “do it later” but tastes develop when they are young. As do habits. Kids need so much healthy, nutrient-rich food, that I have heard it said that there is simply no room at all in their diet for junk—that includes sugar, juice, crackers, bars, etc. Yet many kids get these things every day. Kelly Dorfman, author of Cure Your Child with Food, says that many of the middle-class kids she sees in her practice are suffering from seemingly incurable diseases or learning disabilities caused by malnutrition. While we are getting increasingly aware of the problems of food allergies and sensitivities, an even more prevalent issues is simply a lack of proper nutrition. Kids who eat a primary “white” diet (pasta, bread, cheese), picky eaters, or kids who are allowed to get the major of their calories in snacks or juice drinks, are likely suffering from some amount of malnutrition.  For older kids, it has to be a mix of both taking out the sugary foods and introducing new foods.

Remember, it takes a dozen or more times trying a new food to develop a taste for it. It is a learning process. Some kids (and people) learn faster than others. I spend part of the year living in Guatemala with my kids. The Mayan community that I live in has no word or concept for the idea of not “liking” a food. I encourage you to train yourself and your children out of the idea of prioritizing “liking.” This doesn’t mean anyone should eat tasteless, boring food! Rather, learn to value and teach your children to value home cooked meals made with care and love and nutritious ingredients. 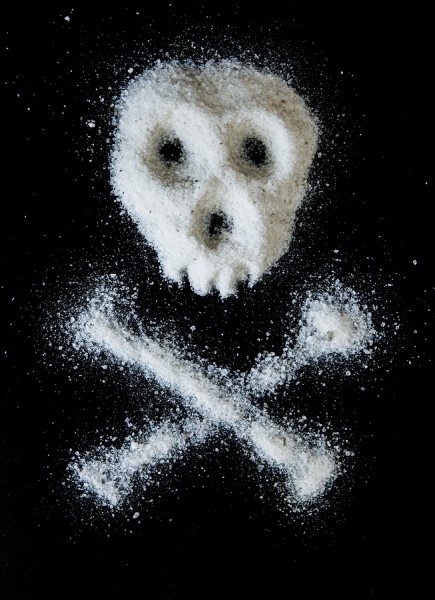 Jennifer: I love that. Thank you! Do you have any suggestions on how parents can control the amount of sugar their children are exposed to, especially during holidays?

Manda: Many of the scientists I speak with say that sugar is one of the most serious toxins of our day, and as addictive as cocaine. Yet, we are feeding our children it at a rate of about 600 more sugar calories daily than when I was young and children are consuming even more than adults. The average Canadian nine-year-old boy will consume a whopping 123 pounds of sugar in a year. It’s no surprise that obesity, Type 2 diabetes, hyperactivity, ADHD, certain cancers, and autoimmune disorders are on the rise—all of which have been linked in some part to sugar.

Here is how to get sugar out of your kids diet:

1- No sugar drinks, not even fruit juice.

2- No hidden sugars in supposedly healthy foods like “bars,” crackers, pre made baby foods, or just about any prepackaged lunch item.

3- Give sugar treats deliberately. I suggest you pick a day or two a week, and limit all processed sugar to that day.

4- Learn to read food labels and look for sugar. Don’t buy items with sugar in it—including non-nutritive sugars, all of which are proven as dangerous or more than sugar itself.

Jennifer: What are you most passionate about right now? (What currently lights a fire under your tush?)

Manda: I am pretty excited about LOTS of things right now. One thing that has got me pretty freaked out though is the research I’ve been doing on screens and kids. The science on how harmful the effects of screen time are on children, particularly young children, is some of the clearest science we have. Despite how little is known about all the new iThingees out there, the research from screens in general suggest that putting your child in front of an iThingee, TV, video game, or app is more harmful than just about any other one toxin or “thing” that we do. Who wants to hear that? Screens are everywhere. They are being used in school (despite no evidence showing they are safe and effective learning tools for young children), they are found in restaurants, the kid play area on the ferry, doctors’ waiting rooms, and just about everywhere we go.

The average toddler now is exposed to over 6 hours of screen time. Yet, every major health organization says that the dangers are so clear children that young should get NO screen time, not even background exposure. This is just another situation where parents are left out on a limb. Screens are cheap babysitters. They stand in for having extended family help. They are easier than creating economies or societies where parents are able to be home by 3 o’clock to pick up kids, help with dinner, and play ball in the backyard. Research shows that once you get kids off of screens and onto play, they do better in school, socialize better, and get along better with their peers.

Visit Manda’s website at www.thegreenmama.com, and find her book, Green Mama: What Parents Need to Know to Give Their Children a Healthy Start and a Greener Future, HERE. You can also have a look at what services Manda offers, and connect with her HERE.

Baby Its Cold Outside! 7 Great Date Ideas for Vancouverites This Winter

Science, Shaken and Stirred – Science of Cocktails is February 4th