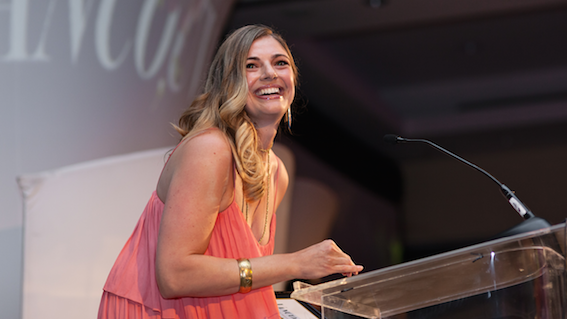 It’s been a banner year for Lauren Mote, as the Bittered Sling Bitters co-proprietor and UVA Wine & Cocktail Bar manager was just crowned the 2015 Canadian Bartender of the Year in Canada’s biggest and most celebrated bartending competition, Diageo World Class Canada.

Hot on the heels of her Bartender of the Year award at the Vancouver Magazine Restaurant Awards in April 2015, Mote becomes the first woman to win the coveted Diageo World Class Canada Bartender of the Year title, and only the second woman to compete at the national level (alongside her close friend and peer, Danielle Tatarin, of Vancouver’s The Keefer Bar).

The competition kicked off on day one with the “Ode to the Windy City” challenge, where Mote developed a super hero pop-up book featuring hospitality workers as the heroes of their community with the host city, Chicago, as the backdrop.

On day two, the finalists competed in two challenges, “Sensorium” and “The Tasting Menu,” which paired cocktails and food, as well as a written exam and blind taste test. Mote cleverly won the Sensorium challenge with an elaborate sensory experience of her whisky-based cocktail, “Loup-Garou” (“werewolf” in French), set to a live trio of French hornists playing Sergei Prokofiev’s iconic Peter and the Wolf.

Said judge Abou-Ganim of Mote’s performance: “She was simply amazing — she owned it! It was something to behold.”

Mote’s road to Chicago began in May, when she presented her cocktails “Kid Video” and “Au Lieu de Ski” at the British Columbia regional finals, held at Vancouver’s Boulevard Kitchen & Oyster Bar. As the 2015 Canadian champion, Mote will travel with Sceney to Cape Town, South Africa for the Diageo World Class Global Finals from Aug. 28 to Sept. 5, 2015 where she will not only represent Canada against the world’s best bartenders from an unprecedented 57 countries, but female bartenders everywhere.

“I cannot begin to express how amazing this feels,” says Mote, who just returned from Montreal and Toronto where she hosted a series of educational cocktail seminars, and will soon travel to New Orleans for Tales of the Cocktail® 2015. “To simply compete amongst my incredibly talented friends and colleagues was an honour, but to win is an absolute privilege.”

Bittered Sling celebrates the collaboration of acclaimed bartender/sommelier Lauren Mote and celebrated chef Jonathan Chovancek, who together bring a combined 30 years of professional experience, knowledge and innovation to the Canadian food and beverage industry. Their award-winning line of high-quality, small-batch cocktail bitters provides palate, plate and potion alike with a subtle-yet-exciting fusion of homegrown ingredients and flavours. Bittered Sling products are available at a growing number of restaurants, bars and retail locations across North America and beyond. www.bitteredsling.com

Located within the Moda Hotel in the heart of downtown Vancouver, UVA Wine & Cocktail Bar is an elegant enclave for wine and spirit connoisseurs seeking a sanctuary that tempts both eye and palate. UVA by Day is an inviting spot to enjoy rich Italian espresso drinks, house-made pastas, artisanal sandwiches, brodos and zeppole, while UVA by Night offers enticing cocktails, refined wines, and eclectic import beers, all paired with the city’s finest charcuterie and artisanal cheeses. www.uvavancouver.com