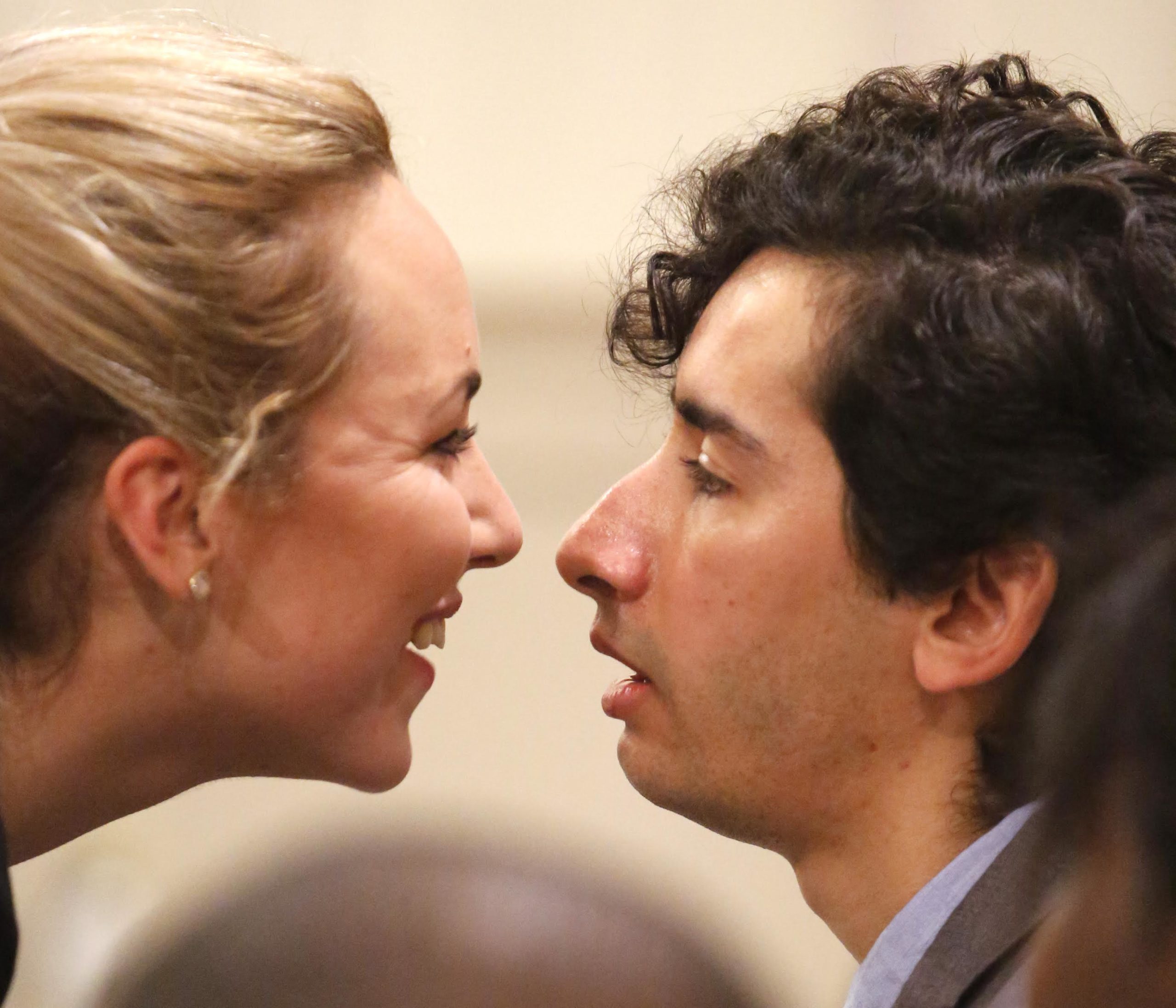 They say that if you are stirred emotionally by the play, the actors have been successful at their craft.

if so, BULL, by Mike Bartlett, playing at the Italian Cultural Centre as part of Tremors from the Rumble Theatre is very, very successful.

To put it mildly, I became totally involved!

I was so tempted to get up and interfere and problem solve, to tell the characters to stop behaving the way they were, to stop terrorizing a poor soul. I was almost driven to angry thoughts and action because I really felt the people were terrible. I wanted our “hero” to stand up for himself, maintain his dignity,  and walk away. But, when dealing with most bullies, that seldom works because they are driven by their own relentless inner needs.

BULL could also be the story of the poor bull in the ring, reacting to the waving flag, not realizing he should be fighting for his life.

This bullring is a simple meeting room in a large company, where Thomas (Adam Olgui), along with his team mates Isobel (Lucy McNulty) and Tony (Vincent LeBlanc-Beaudoin) are awaiting their supervisor, Carter (Pedro Chamale), who is notably late.

Thomas, appears in a rumpled washed out jacket, wrinkled slacks and worn shoes and is nervous.

It is hard to decide if clothes make the man, or woman, but if they do, Tony is the man in the distinguished black designer suit, crisp white shirt, perfect tie, and shoes so shiny you could use them as a mirror. He is tall and walks with authority.

She, too, struts and and walks with confidence.

Isabel starts immediately, pointing out an imaginary spot on Thomas’s face, moves on to his choice of clothing, and carries on from there. She is the ultimate shrew. I have stronger words for her, but probably cannot publish them. She operates with such malice and vengeance and yet, doesn’t gain a lot of satisfaction from her actions.

Thomas has arrived unprepared as Tony, his team leader, did not pass on the necessary information. Thomas is immediately but subtly set upon by his two teammates.  He reacts to each comment, look, innuendo, and the other two operate as a tag team, mercilessly baiting and switching power over him.

It becomes clear that only two will have jobs at the end of the meeting and now Thomas is even further weakened by his impending sense of doom.

When Carter finally arrives, confident in his dress, not even wearing a jacket, only a white shirt, open at the neck, you hope he can see the truth of the situation. He even cuts Tony off at one point and a faint hope arises, that he is a wise leader. But, alas, he is part of the hierarchy, those that can walk into a room and not be fearful, those that are totally confident in their position.  He sees the other two for who and what they are, but more importantly, he sees Thomas for who he is not. And he is not part of the team!

Tony is not the leader in the bullying but he certainly becomes a partner, and when he finally  leaves the meeting, he will do so with a small laugh but no long term memory or deep thoughts and regrets about it. He is more superficial than deep, but does know how to find the soft underbelly.

Isobel is definitely the leader and by the end, the ultimate definition of evil.

The acting is superb, as good as any I have experienced in a more seasoned, professional company, not a “spirited group of young artists.” Each one plays their part with no hesitation as if they had been brought up in that skin. You dislike them for the effectiveness of their portrayal.

Thomas shrivels into his small frame and eventually explodes and resorts to physical violence when he realizes everything is lost to him.

Isobel leaves the room having destroyed every vestige of hope for Thomas, getting deeply personal. She retains and jokingly buries the issues that drive her to the level of destruction she displays here.

BULL is an excellent production, a tight script, an hour you won’t forget. For some, it will bring memories of a situation they have been a part of, or seen, or feared but everyone will identify in some way. I highly recommend it.

Rumble Theatre has operated for over two decades as a part of the Vancouver theatre community and the Tremors festival highlights emerging talent. They have selected three outstanding scripts and assembled a company of emerging artists to direct, design and perform each show. For two weeks, these three plays will be performed simultaneously in different rooms of the Italian Cultural Centre.There is a relaxing, air-conditioned and reasonable cash bar!

“Every second year is a Tremors year at Rumble,” says Rumble Theatre Artistic Director Stephen Drover. “And with each Tremors we find ourselves inspired by the tidal wave of talent coming from our community of emerging artists. This year is certainly no exception. We are privileged to produce this event and delighted to share with our audiences the work of some truly remarkable young artists.”

The Boys are Back in Town: Les Ballets Trockadero Return to Vancouver by Popular Demand

2 thoughts on “Take an hour and take in BULL!”