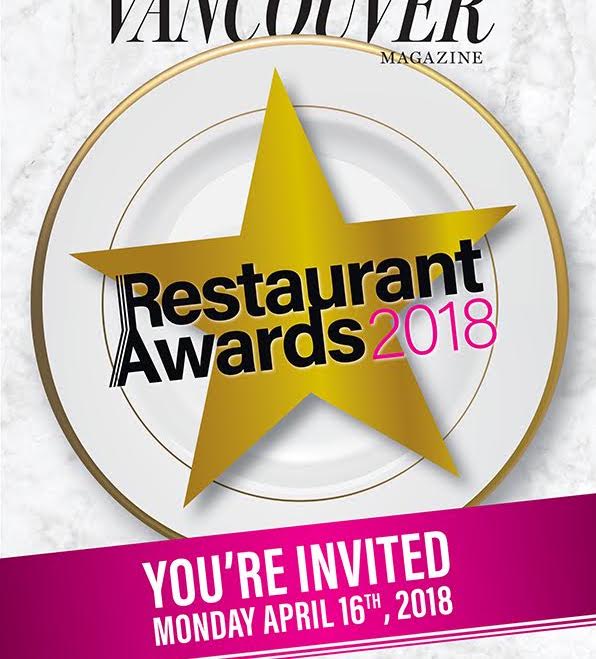 At yesterday’s Vancouver Magazine Restaurant Awards, newcomer St. Lawrence made a bold entrance into the city’s food scene – winning both Best New Restaurant and Restaurant of the Year. The 29th edition of the awards show recognized winners in 41 different categories as Vancouver’s top culinary talent came together to celebrate the industry’s best.

Chef of the Year honours went to Alex Chen. The award recognizes the Herculean effort that  Chen has put forward since opening Boulevard Kitchen and Oyster Bar in 2014. The judges lauded how he “moved a very traditional hotel kitchen forward into fresh, exciting cooking” as well as how he “effortlessly brings Asian sensibility, lightness and nuance to his menu”. His talents contributed to Boulevard’s breakout win of both Best Upscale and Best Seafood this year.

“The common thread among this year’s best restaurants are head chefs who are hands-on in the kitchen. Whether it’s JC Poirier at St. Lawrence or Alex Chen at Boulevard, restaurants where the chef is actively involved in the nitty-gritty of food preparation are reaping the benefits,” said Neal McLennan, Food Editor, Vancouver Magazine. “We are thrilled to celebrate St. Lawrence and Boulevard as well as all the other talented teams who took home Restaurant Awards this year.”

Yaletown institution Cioppino’s regained its top spot in the Best Italian category while shake-ups occurred in categories like Best Japanese (Masayoshi) and Best Dim Sum (Golden Paramount). This year’s show saw a number of categories put back into the rotation, including Best Steakhouse (Hy’s Encore), Best Pizza (Via Tevere) and Best Ramen (Marutama).

A surprise upset occurred when The Grill Room at the Fairmont Chateau Whistler was awarded Best Whistler. Meanwhile, perennial winners Dynasty Seafood, Le Crocodile and Maenam successfully defended their titles as Best Chinese, Best French and Best Thai, respectively. The Sunday brunch crowd has a new place of pilgrimage with Burdock & Co. being awarded Best Brunch. Outside of the Lower Mainland, Agrius repeated its win of Best Victoria while Waterfront Wines continued its streak as Best Okanagan.

Anthony von Mandl of Mission Hill Winery was honoured with the Lifetime Achievement Award. In 1981, von Mandl purchased a vineyard in the Okanagan and set about making wines that would stand on par with the greats of the world. Thirty-seven years and numerous international awards later, von Mandl has succeeded not only in turning Mission Hill into an icon of the Canadian wine scene, but also in changing the way that British Columbians and the world look at wine from this province.

The Restaurant Awards were judged by a panel of 14 leading food and wine experts and were handed out at a formal awards show at the Sheraton Wall Centre in Vancouver on Monday, April 16. A full list of winners is available at www.vanmag.com/RA2018.

Since 1967, Vancouver has been informing, guiding, and entertaining people who engage with the city. Mixing quality journalism and service-driven pieces, the magazine chronicles and reflects Vancouver’s emergence as a dynamic, cosmopolitan urban centre. Vancouver is available as a monthly magazine, through its weekly e-newsletters, online at vanmag.com, and on Twitter and Instagram (@vanmag_com).