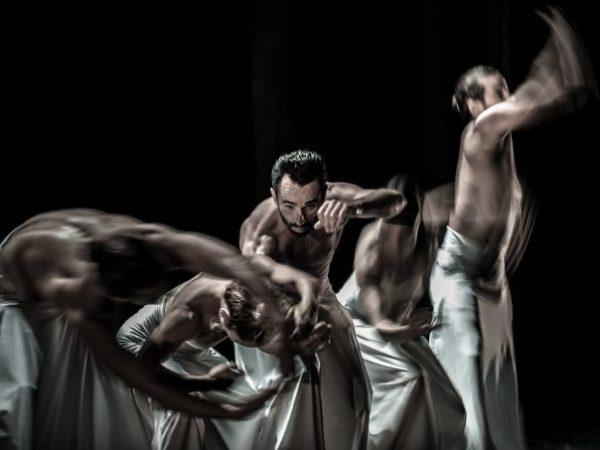 DanceHouse is delighted to announce the launch of their 2018/19 season with France’s Company Wang Ramirez in the Canadian premiere of their potent and profound work, Borderline, October 26 and 27, 2018 at 8pm at the Vancouver Playhouse. Performed to layered rhythms and spoken word by composer Jean-Philippe Barrios, best known as LACRYMOBOY, acclaimed choreographic duo Sébastien Ramirez and Honji Wang will join their company of artists to combine hip hop and contemporary dance with the soaring movement of martial arts in a timely and urgent exploration of democracy, immigration, manipulation, and the place of individuals in society.

“Coinciding with escalating nationalist rhetoric and contentious debates on immigration worldwide, Borderline’s open-ended examination of diasporic identity is more relevant than ever,” says Jim Smith, Artistic and Executive Director of DanceHouse. “As Canada is largely a country of immigrants, local audiences will resonate with the work’s illumination of the beauty and the challenges inherent in embodying more than one culture — honouring multiple traditions and languages, while forging a new blended identity of one’s own. Company Wang Ramirez has created a theatrical experience that will linger long after the curtain falls, and stimulate essential discourse about the future of democracy.”

Choreographed in 2013, Borderline consists of several thoughts, ideas, and moments that question the meaning of democracy. Hailed as an “ingenious show by stunning performers” (The Evening Standard), five dancers attached to cables perform a series of 11 intimate vignettes that explore the liminal spaces of human relationships. Social and physical boundaries are evoked by the innovative rigging system that renders gravity optional. The rigger acts in concert with and against the dancers, working alternately as a liberator and a manipulator; a capricious force that upends the story, drags lovers apart, and sends bodies tumbling in space.

Wang and Ramirez will be joined on stage by fellow dancers Louis Becker, Johanna Faye, and Saïdo Lehlouh, along with aerial rigger Alister Mazzotti. Each performer is integral to the creation process, bringing their considerable talents as artists and personal experiences with immigration and cultural dissonance to the work. During the performance, they draw inspiration from their own biographies, as well as stories passed on by their loved ones.

Jean-Philippe Barrios, the French composer and percussionist known as LACRYMOBOY, composed Borderline’s evocative score, supporting the hip hop elements with percussive beats and experimental electronic tonation. The music is interwoven with sections of spoken word that is both pre-recorded and performed live. Amplifying the themes of social and cultural dynamics, the voice-over includes a teacher outside Paris complaining about police violence against his students, as well as Ramirez’s father discussing poverty and his youth in Spain under Franco’s dictatorship.

Founded in 2007 by German-Korean Honji Wang and French-Hispanic Sébastien Ramirez, Company Wang Ramirez creates and performs theatrical dance works in prominent festivals and theatres around the world. Their work is a product of nuanced artistic blending, incorporating both their mixed cultural identities and the seamless fusion of hip hop with contemporary dance, martial arts, and aerial work.

Known for their captivating choreography built on technical virtuosity, poetry and humour, the highly sought after duo have collaborated with Madonna and Akram Khan, as well as several luminary artists from different fields. The company last performed in Canada at Fall for Dance North Festival in Toronto in October 2016, and have been the recipients of numerous awards and accolades, including the New York Bessie Award for Outstanding Performers in 2013 and nominations for the Rolex Mentor & Protégée Arts Initiative Program in 2012 and the New York Bessie Award in 2017 for Outstanding Production.

About DanceHouse (dancehouse.ca)
DanceHouse connects Vancouver audiences and the local arts community to the international world of dance by presenting exceptional companies that are recognized for their excellence, innovation, and international reputation. Since 2008, DanceHouse has presented vibrant and inspiring companies from Canada and around the world. In addition to the performances on stage, DanceHouse offers a suite of engagement opportunities and a chance for the general public and local artistic community to engage with the presented artists and their work.