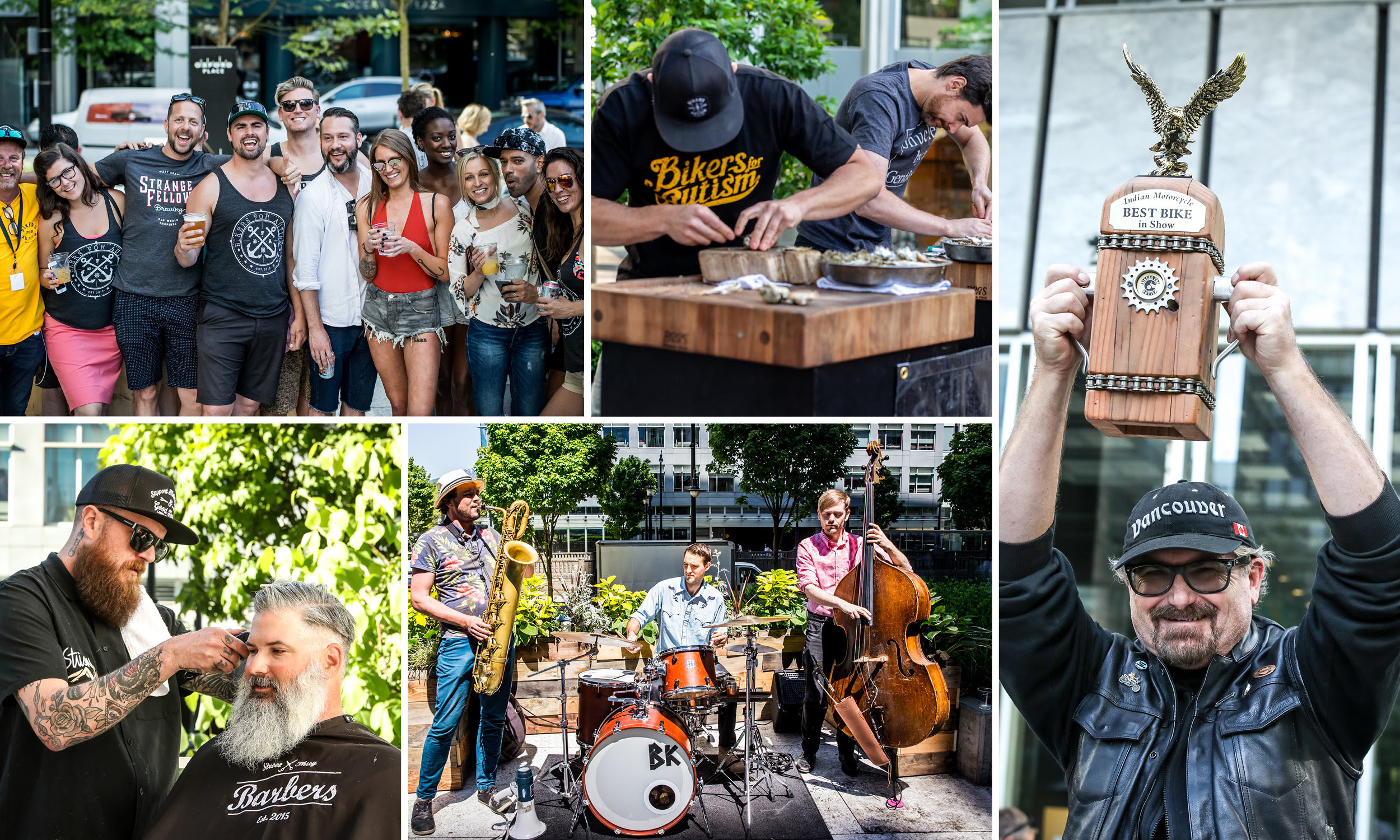 SHUCK-TACULAR: BIKERS FOR AUTISM ANNOUNCES NEW FEATURES FOR FIFTH ANNUAL SHUCK IT FORWARD FUNDRAISER ON MAY 26

Bikers For Autism has unveiled the lineup of entertainment, cocktail and culinary competitions and raffles that will complement the oyster-shucking competition taking centre stage at its Shuck It Forward V fundraiser at Chewies Oyster Bar in Coal Harbour (1055 West Hastings) beginning at 12 p.m. on Sunday, May 26.

Now in its fifth year, Shuck It Forward is an afternoon-long spectacular that aims to raise awareness of and funds for individuals and families affected by Autism Spectrum Disorder (ASD). Since its inception in 2015, Shuck It Forward events have contributed more than $110,000 to an array of community events, programs and initiatives championed by Bikers for Autism.

Presented in conjunction with Fanny Bay Oysters and Trev Deeley Motorcycles, Shuck It Forward V will showcase a full slate of events including an oyster-shucking competition pitting two dozen of North America’s best male and female shuckers against each other for $2,000 in cash prizes and airfare to compete in the Raspberry Point International Oyster Shucking Championships in P.E.I. later this year.

Caesar Competition: At 3 p.m., six Vancouver bartenders will shake it forward by taking part in a ‘black box’ competition that will challenge them to incorporate standard and mystery ingredients to create a unique Caesar recipe that will be tasted and judged by Wildebeest Bar Manager and Mind the Bar Foundation ambassador Alex Black.

Entertainment: Guests will have plenty of entertainment on the Central City Brewing and Queensborough Gin Fizz stage leading up to and after the big shucking competition including: singer-songwriter Marshall Forsythe; DJ Owen Marmorek; Joe Pound, house DJ for the Roxy Cabaret; jazz band The Tim Sars Trio; and special guest speaker Austin Riley of Racing With Autism.

Trev Deeley Motorcycle/Art Show: During the event, a dozen motorcycles from custom bike builders all over the Lower Mainland will be on display in the onsite showroom and compete for the peoples’ choice Best Bike in Show Award. The first 300 people through the door will also be entered into a draw for a custom-built mini Bikers For Autism motorcycle from North Vancouver’s Moto Concept Inc.

Tickets to the event, which also features a pop-up Bootleg Barbers barbershop, Botanist Islay Gin cocktail bar, silent auction featuring a fully stocked wine cellar, and tap takeovers courtesy of Strange Fellows Brewing, The Parkside Brewery, Red Truck Beer Company and Greenhill Cider, are $35 per person plus ticketing fees. Tickets to a Moto Concept/Nude Vodka Soda VIP area — which includes two Nude Vodka Sodas, access to a private bar and elevated seating area, custom lanyards and a ticket for the mini Bikers for Autism motorcycle raffle — are also available for $75 per person plus ticketing fees. Shuck It Forward is only one of a number of events, programs and fundraising initiatives championed by Bikers For Autism. Last year, Bikers for Autism teamed with Music Heals to hold a music therapy ride from Vancouver to Pemberton that raised more than $70K for ASD-related music therapy programs, and regularly works with support organizations such as the Pacific Autism Family Network, Autism Support Network, SUPA Society, Little Heroes Hockey Academy and ET Music Therapy.

DONATIONS
Bikers For Autism is graciously accepting donations both large and small for the Shuck It Forward raffle draws and silent auctions. To donate a prize, email [email protected]com.

ABOUT BIKERS FOR AUTISM | The Bikers for Autism Society was launched in 2012 as a result of founder James Baker’s passion for motorcycles and the journey of family members living with Autism Spectrum Disorder (ASD). Since that time, Bikers for Autism has been actively creating unique events and programs along with fundraising initiatives to generate awareness, acceptance and inclusion in support of individuals and families affected by ASD. Bikers For Autism fundraising initiatives support a number of community programs such as SUPA Society, Little Heroes Hockey Academy, Austin Riley’s Racing With Autism, and the Pacific Autism Family Centre’s Music Therapy Studio. On May 26, 2019, BFA will mark the fifth anniversary of its flagship ‘Shuck it Forward’ fundraiser at Chewies Steam and Oyster Bar in Coal Harbour, which has raised more than $110,000 since its inception. | bikersforautism.com

Mark your calendars: “OMG” Half Corked ticket release on July 20th at 9:00am PT