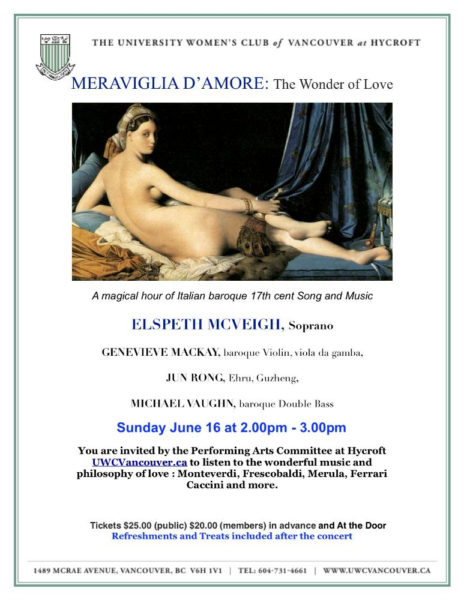 MERAVIGLIA d’AMORE: THE WONDER of LOVE

Having played to a packed and appreciative audience at their last concert, these wonderful musicians have been asked back to delight again with the excitement and beauty of early music and song by the greats – Monteverdi, Caccini, Ferrari, Lundi…

Celebrate the wonder and Joy of Love in true 17th cent manner in a gorgeous setting of the unique parlour at Hycroft Manor, one of Vancouver’s finest heritage buildings.

Enjoy refreshments after the show and see the house.

Elspeth McVeigh is an accomplished singer of early Scottish and European Renaissance and baroque music.

Born and raised in Scotland, she learnt numerous, unusual and almost forgotten traditional songs and ballads from her grandmother (including by Robert Burns) which she delights in singing.

Elspeth lives and performs in Vancouver and frequently returns to her native Scotland to perform early Scottish and European music. She has sung at a number of historic venues including Traquair House, Mellerstain House (an 18th cent. jewel) the Edinburgh Fringe Festival and Rosslyn Chapel (da Vinci Code) returning there in June for a concert of 16th cent music of the court of Mary, Queen of Scots.

Web: http://www.elspethmcveighmusic.com | https://www.uwcvancouver.ca
Twitter: @HycroftUWCV
Facebook: @UWCVHycroft
BC Alliance for Arts and Culture
The BC Alliance for Arts + Culture is British Columbia’s leading arts information aggregator and a resource to the arts, culture and heritage community. Since 1986 we have advocated for our sector by monitoring public policy, synthesizing issues for the public, supporting and developing research, and representing the interests of artists and cultural workers.
Media release and poster image provided by BC ArtsPost.
[wdi_feed id=”2″]