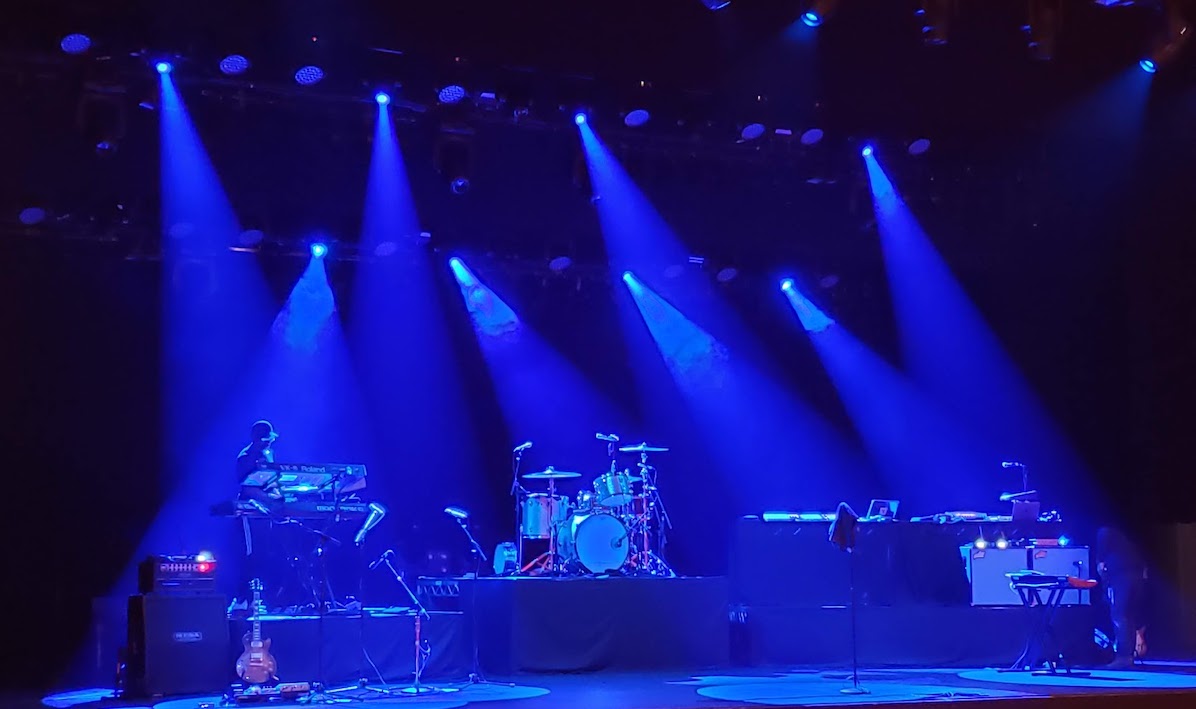 Strong Roots Run Deep
What Happened When The Roots Came to Vancouver, A Review by Melinda Gill

The TD Vancouver International Jazz Festival continued into its final weekend with the Grammy Award-winning hip-hop group, The Roots. You might know this group from late night television on The Tonight Show Starring Jimmy Fallon, but you don’t truly know this group until you see them perform live in their hip-hop element. They treated us to a 90-minute show at the Queen Elizabeth Theatre. 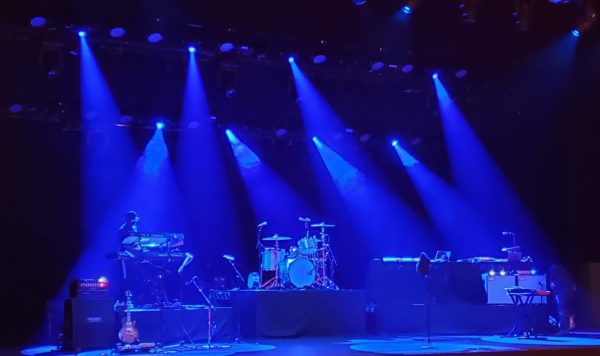 I arrived early, and the theatre was sparsely populated, but just before show time there wasn’t an empty seat in the house. Audience members ranged in age from the young, to the young at heart and everyone was ready for a great show. We waited in anticipation, some quieting their phones while others were busy taking selfies before the show was to begin.

The lights dimmed and there was a welcome solo DJ mix that started the show. We watched the DJ tap quickly and heard the heavy beats that dropped as he worked both hands and an elbow across his marvelous music machine. Just then the Roots entered to a standing ovation. The band lead by drummer Questlove and lead vocalist, Black Thought, took the stage with the others and everyone in the audience was on their feet cheering. The Roots play a jazzy hip-hop, but I have not seen this side of their music before. They are a multi-dimensional group, many of them with solo projects on the go. Each member of the group was highlighted with solos throughout the night. Although hearing them play as an ensemble was incredible, the individual solos were a highlight of my evening.

Die-hard fans littered the audience, singing along to the lyrics and pumping their fists in the air. For the entire 90 minutes, the people in the lower section where I was sitting, remained standing and dancing. After each solo, everyone gave even louder calls and cheers to show their appreciation. The one solo that stood out from the others, was that of guitarist, Captain Kirk Douglas. His solo began innocently enough, then had me and those around me reeling in disbelief. This was absolutely the best guitar solo I’ve heard in a very long time, and I attend a great many concerts. It lasted about ten minutes and we were incredibly impressed with his talent!

More cheers were heard when the band went into a medley of popular songs like “Seven Things”, by Ariana Grande, or when the drum and bongo solo sampled “Let Your Backbone Slide”, by Maestro Fresh Wes. Near the end of the show, Captain Kirk Douglas and Tuba Gooding Jr. (Damon Bryson) jumped like cross fit athletes onto the drum kit riser while wearing and carrying their heavy instruments, and they pulled it off, much to our amazement! Then, they counted down and leapt into the air landing gracefully on the stage below. The sousaphone (looks like a tuba but coils around the player with the bell pointing forward, otherwise known as a marching tuba) is not a light instrument, so jumping with it is extremely strenuous. We all breathed a sigh of relief when Tuba Gooding stuck the landing!

As the evening ended, drummer Questlove began throwing drum sticks out into the crowd as audience members stretched (mostly in vain) to catch them. There were eight lucky recipients this evening, which was very generous of the band. At the back of the theatre I was talking to the sound guys when a gentleman came up asking for a set list. It was a mile long, a testament to the evening’s music. 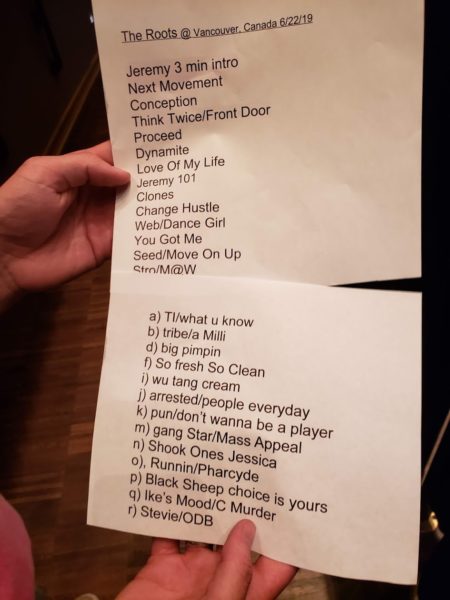 As I was walking to the SkyTrain station, I heard a huge cheer erupt down the street. There was a small crowd gathered behind the Queen Elizabeth Theatre. Members of The Roots were exiting the door, on their way to a couple of Lincoln Continentals that would whisk them away to the airport. They were due to play in Ottawa the following night and would have to hustle if they were going to make their flight. Some of the band members had take-out food handed to them so they could eat dinner on the road. Although it was almost 10pm at the time, a couple members took the time to talk to those of us standing there. The most gracious with his time was Captain Kirk Douglas. He shook hands, took selfies with many of us and even signed a few LP’s people handed him. I was thrilled to be able to tell him how much I appreciated his guitar solo and he was ever so humble with his response. What a thrill for all of us and what an amazing way to end an incredible night.