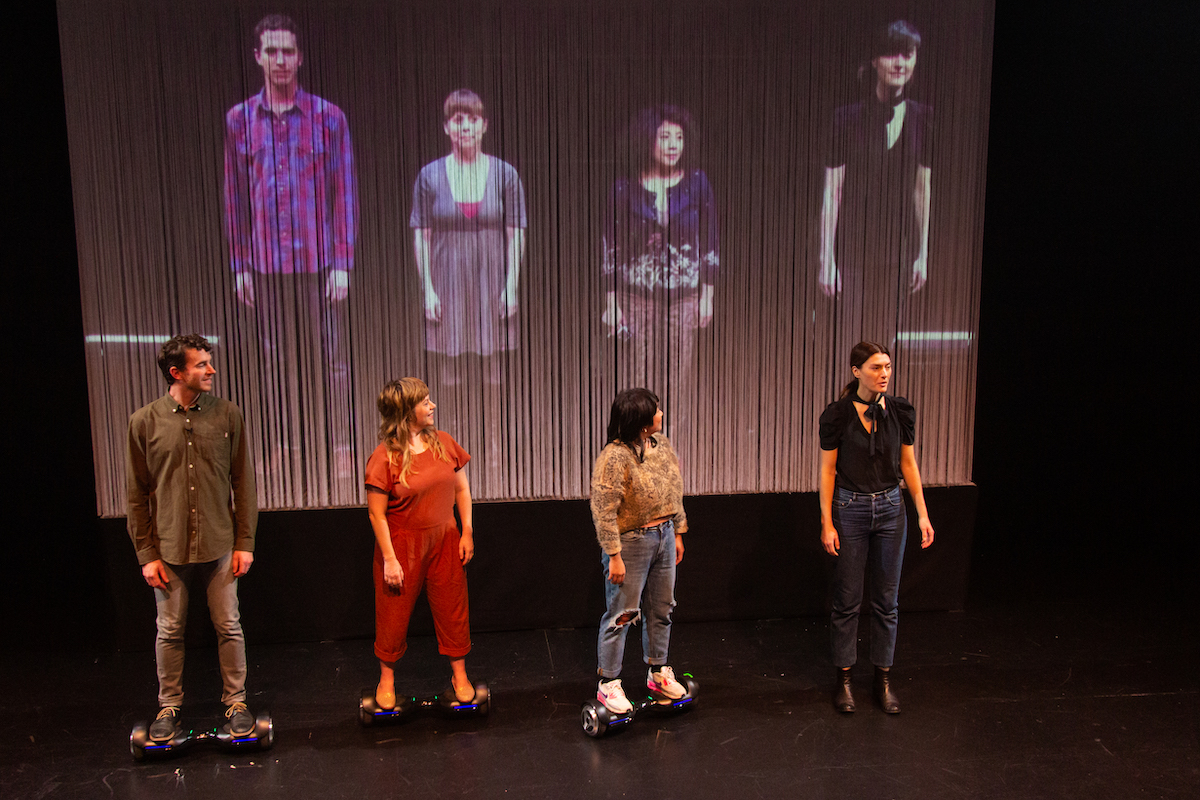 KISMET: things have changed is a show about fate and destiny—a decade in the making.

The Cultch, with Push International Performing Arts Festival, are thrilled to present KISMET, things have changed, from The Chop (Vancouver), February 4-8, 2020, at the Historic Theatre. KISMET, things have changedis part of The Cultch’s fourth annual Femme Series; a series of shows and events intended to highlight female-identifying voices and experiences. This event uses an inclusive definition of femme, and includes all self-identifying female, trans, and non-binary folks.

Ten years ago, four artists in their late 20s and early 30s travelled across the country to interview 100 people, aged 1 to 100 about what they believed in. What resulted was the widely acclaimed national treasure KISMET, one to one hundred. Now, a decade later, and in a new place in life (with parental death, marriage, children, career changes and relocation) the same team set out to find the surviving people and interviewed them again.

“Ever since the success of [KISMET one to one hundred] we had the thought, ‘what if we made a new show every 10 years. It would stand alone, with no need to have seen the first iteration and be a social exploration of the passage of time” says co-creator, Emelia Symington Fedy. “About five years ago we started to take this idea seriously. Life was getting hard. We wanted to regroup. We wanted to find and reconnect with these people as we’d invested so much of our lives into their lives. We were curious about the difference a decade makes in life and culture and we had a study group of 100 people to draw wisdom from.”

It took a year to find everyone they had interviewed ten years earlier, and this time when the creative team asked the same 10 questions they got very different answers.

Known for productions that intentionally connect the audience with the performers in unique and direct ways, The Chop, led by Emelia Symington Fedy and Anita Rochon, is a Vancouver company constantly pushing the envelope and creating innovative theatrical experiences. Ten years ago the theatrical documentary, KISMET, one to one hundred, was nominated for two Jessie Richardson Theatre Awards, for ‘Outstanding Innovative Creation,’ and for ‘Critics’ Choice for Innovation.’ KISMET, things have changed is a stand-alone follow-up to one to one hundred. With it, The Chop have continued to innovate—combining video, sound recording, verbatim re-enactments, and music. “Theatre has changed a lot in ten years,” says Rochon. “What we used to tell the stories ten years ago… it doesn’t work the same way anymore. How are we going to tell these people’s stories differently this time? … We’re taking a multifaceted approach to telling multi-generational multi-voiced stories.”

Since 2006, Vancouver-based The Chop has created and toured original, award-winning productions internationally. Chop shows are recognized by their intentionally live and direct connection with the audience. The company is known for its sophisticated experimentation with authenticity. Their works include KISMET one to one hundred, Sonic Elder, Through the Gaze of a Navel, How to Disappear Completely, and Pathetic Fallacy.

The PuSh International Performing Arts Festival is one of Vancouver’s signature events. Produced over three weeks each January, the Festival expands the horizons of Vancouver artists and audiences with work that is visionary, genre-bending, multi-disciplined, startling and original.

The Festival showcases acclaimed international, Canadian and local artists and mixes them together with an alchemy that inspires audiences, rejuvenates artists, stimulates the industry and forges productive relationships around the globe. More than just shows, the Festival is a broker of international partnerships, a meeting place for creative minds, a showcase of Canada’s best and an incubator of brilliant new work.

Since 1973, The Cultch (formally the Vancouver East Cultural Centre) has been one of Vancouver’s most diverse and innovative arts and cultural hubs. The organization operates three theatrical venues, a gallery, and various ancillary spaces in the heart of East Vancouver. The Cultch offers dynamic contemporary programming in theatre, dance, music, and the visual arts, bringing world-class cultural presentations to thousands of citizens each year through its own programming and through providing rental opportunities for community users. Our purpose is to provide a venue for performance that serves a diverse and engaged public and provides space for artistic experimentation and development, building an audience for local companies and presenting cutting-edge national and international work.