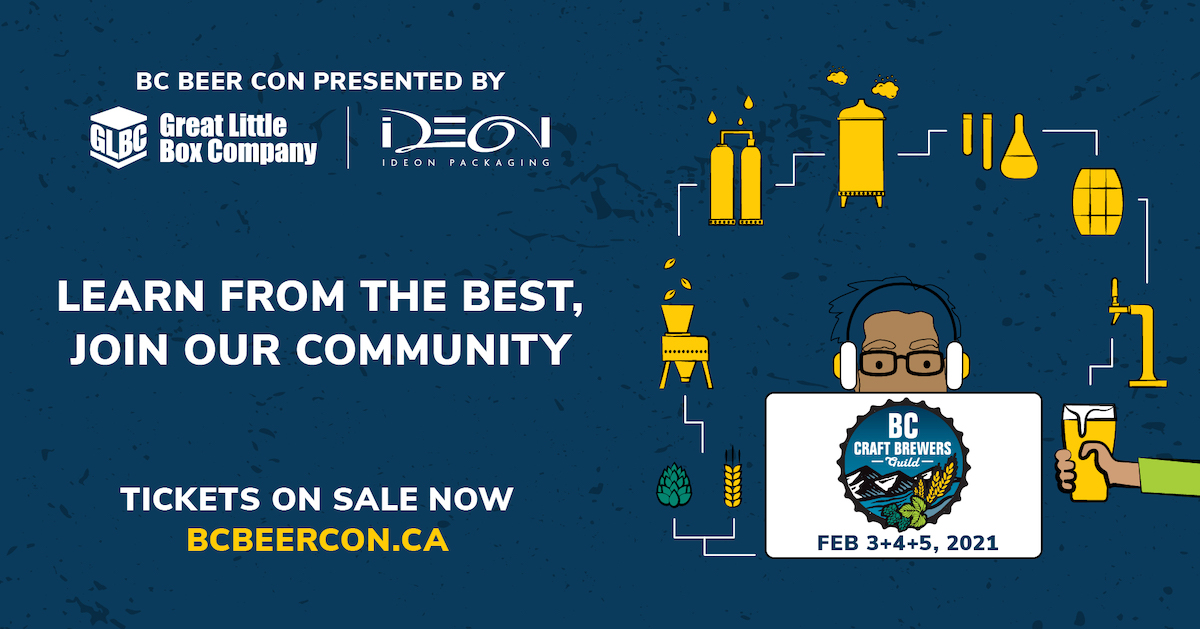 BC Beer Con will return virtually to a monitor near you from February 3 to 5, 2021.

The BC Craft Brewers Conference, hosted by the BC Craft Brewers Guild and presented by Great Little Box Company | Ideon Packaging, brings together key stakeholders from the Canadian craft brewing industry for an annual networking and educational event.

From February 3 to 5, brewery staff, brewing students and beer enthusiasts are invited to take part in various educational seminars and keynotes to gear up 2021. The three days are divided into half-day tracks, broken out into Brewing, Marketing & Sales, Operations and Finance. Keynote speakers for BC Beer Con include:

Brewing up a real change – a discussion about diversity, inclusion and equality with Ren Navarro of Beer. Diversity.

The Path Forward for the Hospitality Industry from COVID-19 with Ian Tostenson, President and CEO of the BC Restaurant and Foodservices Association.

In response to current public health advisories, the BC Craft Brewers Guild has developed a conference focused on enriched virtual experiences promising to keep BC’s craft beer community connected during the conference and throughout the year. Attendees will receive educational seminars and networking sessions centered around activating a new online private community network. The BC Craft Brewers Guild Community is a private network for attendees to form new connections directly with industry peers, suppliers, and various partners, to gain insight into key industry issues and solutions, year-round.

“While we can’t meet in person this year, we’re confident the new format and online community platform will help connect BC Craft Brewers in a new way,” said Ken Beattie, Executive Director of the BC Craft Brewers Guild. “It’s important for us to continually build connections within our industry and outside of it, to ensure the longevity of craft brewing in BC.”

“Breaking out the conference into half-day tracks allows people to take part in what they’re most interested in,” said Beattie. “Running concurrent sessions didn’t allow people to absorb everything they wanted to. Now, they have the option to stay for the whole conference, or just attend the half-day session that pertains to their job.”

For more information on BC Beer Con, please visit www.bccraftbrewersconference.com.

About the BC Craft Brewers Guild

The BC Craft Brewers Guild represents craft breweries from all over BC. The mission of the Guild is to support the ongoing creation and discovery of truly great BC craft beer by helping British Columbians understand the cultural, community and economic benefits of BC’s vibrant craft beer scene. The Guild works to unite the voices of all the craft breweries in BC; so BC’s craft beer community continues to develop and grow, and advocates on behalf of our breweries by working with local and provincial government to sustain and improve support for BC craft breweries that create local jobs, and boost local economies and local communities throughout BC.

Media release provided by Lesley Chang, Beattie Tartan. If you would like to be featured on MyVanCity.ca please connect with your pr agency or email myvancityval@nullgmail.com for full details. Samples accepted for review.