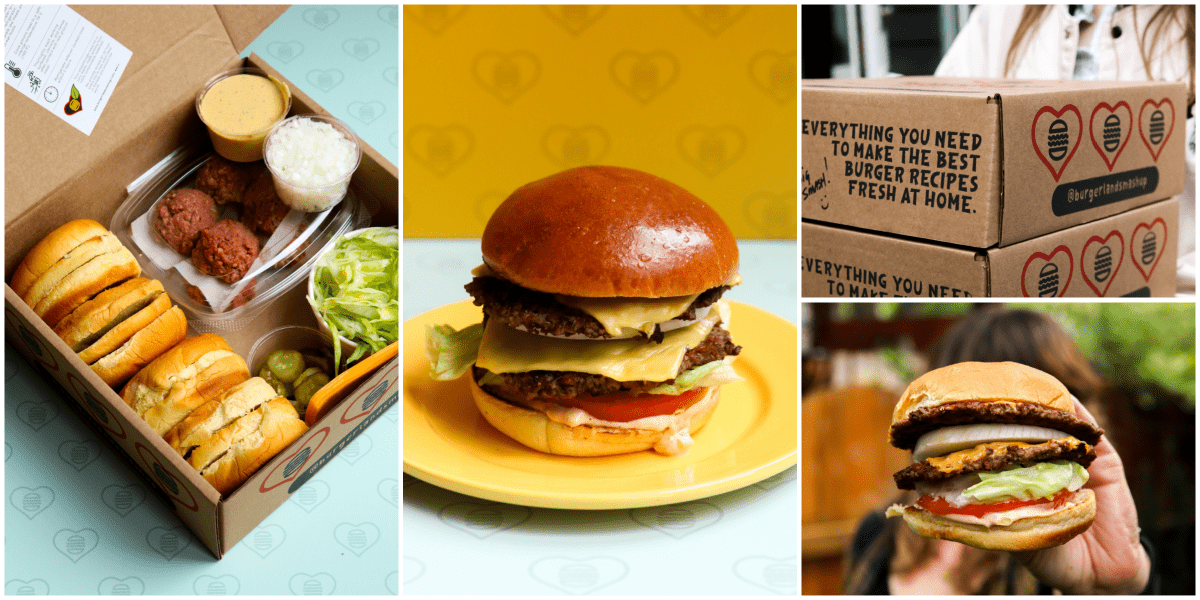 Just in time for summer, the one-stop-smashburger-kit-shop Burgerland Smash Up is adding the award-winning, 100-per-cent plant-based Impossible™ Burger and vegan/vegetarian ingredient alternatives to its ever-growing lineup of iconic Smashburger recipes.

All four of Burgerland’s beloved Smashburger Kits — the In-N-Out-Burger-inspired California UP-N-DOWN, Classic American Cheese, Oklahoma Fried Onion & Cheese and Big Mac-inspired, double-patty Big Smash — will be available in vegan- and vegetarian-friendly formats that include recipe cards with video links and all the pre-measured premium ingredients to cook up plant-based smashburger feasts for four in the backyard, on the beach on at the park for $39.99 per Kit.

Launched earlier this year by burger aficionado Bodhi Valentine — who nimbly turned a COVID layoff in the tech sector into a culinary pivot and quest to help fellow burger obsessives raise their at-home burger game — Burgerland’s new menu additions offers burger lovers the same fun, speed and flavour of their popular premium smashburger kits but with a plant-based twist for the same price.

“I tested a lot of plant-based options but was absolutely blown away by how the Impossible™ plant-based protein looks, cooks, and tastes — and smashburger lovers of all stripes will be, too,” says Valentine. “It has to be experienced to be believed. It’s our mission at Burgerland to help everyone make better burgers, whether you want to eat less meat or no meat whatsoever.”

Regardless of protein preference, all of Burgerland Smash Up’s Kits are made fresh to order and ready for pickup or delivery in zero-waste packaging. As an additional nod to its earth-forward stewardship focus, Burgerland Smash Up is partnering with TreeEra to help offset its carbon footprint and donating $1 for every Kit ordered — the cost to plant one tree through the TreeEra planting program.

HOW TO ORDER
Burgerland Smash Up’s Vegan and Vegetarian Kit versions featuring Impossible™ Burger Smashballs and Vegan/Vegetarian ingredient alternatives will be available for $39.99 starting Wednesday, June 30 at burgerlandsmashup.com, with delivery on demand also available via Uber Eats and Doordash.

ABOUT BURGERLAND SMASH UP | Launched in 2021 by burger aficionado Bodhi Valentine, Burgerland Smash Up is Vancouver’s home for freshly ground organic, grass-fed beef or Impossible™ Smashburger Kits that help vegan, vegetarian and ‘flexitarian’ burger obsessives raise their at-home burger game. The Burgerland Smash Up lineup features a variety of four-pack Kits that pay homage to some of the most classic and beloved regional burger styles and recipes via Kits that include the In-N-Out-Burger-inspired California UP-N-DOWN, the Classic American Cheese, Oklahoma Fried Onion and Cheese and Big Mac-inspired Big Smash. | burgerlandsmashup.com