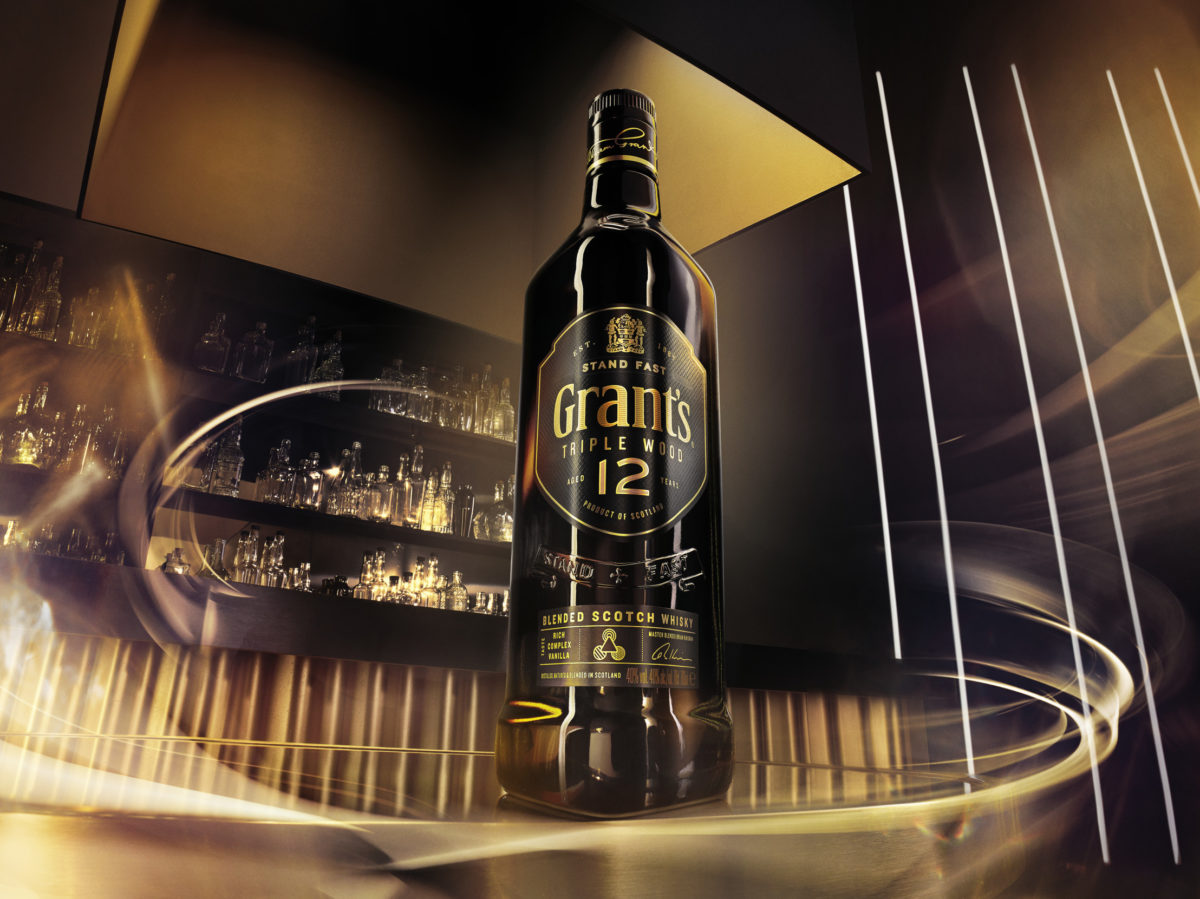 Two Barrels Make It Good, The Third Makes it Grant’s.

Grant’s Blended Scotch Whisky is rolling out its award-winning 12-year-old whisky across Canada in a distinctive sleek black bottle with gold accents.  Representing the gold medals awarded to the whisky, Grant’s Triple Wood 12 joins the Triple Wood line up within the Grant’s Family.

Grant’s is the cornerstone brand from William Grant & Sons (four-time winner of the IWSC Distiller of the Year), six generations of the Grants family have stood together through thick and thin to hold the title of Scotland’s oldest continuously family-run blended whisky makers. Grant’s remains the only blended whisky producer to have its own Stillman (The Maker), Cooper (The Muscle), and Master Blender (The Master) working together in one location. Grant’s is blended by the respected master blender, Brian Kinsman, who personally selects the three barrels to create the smooth, fruit-balanced flavour of Grant’s Triple Wood 12.

“I’ve long been proud of the whiskies we create together at Grant’s Girvan Distillery,” comments Brian Kinsman, Master Blender at William Grant & Sons. “When you have a winning team and determination, you can really do great things. We’ve gone the extra mile for Grant’s Triple Wood 12, aging it for a minimum of 12 years and using a sherry cask as the third barrel to layer in a sweet spice to balance the vanilla and sweetness.”

Grant’s Triple Wood 12 takes a creamy, fruity spirit and is aged in three barrels. Each barrel provides a distinctive layer of flavour to the final blend. Refill Bourbon barrels offer brown sugar sweetness, American oak lend subtle vanilla smoothness, and the revered sherry cask – that dials the quality up a notch, adds a sweet, spicy finish that sets Grant’s Triple Wood apart. The liquid is aged for a minimum of 12 years before blending, resulting in a rich, complex, final product.

Grant’s Triple Wood 12 is produced at Grant’s Girvan Distillery, an impressive structure that was built in 1963.  When another Scotch company threatened to cut off the supply of grain whisky, Charles Gordon, great-grandson of William Grant, worked together with a team of 400 local workers to complete the distillery in a record time of nine months. The result of their combined efforts and steely determination was the most technologically advanced distillery of its day.  Today, Grant’s Girvan Distillery is home to Grant’s not-so-secret weapon: the Girvan Patent Still, which produces its signature – and coveted – sweet, fruity, and light distillate.

“When savouring Grant’s Triple Wood 12, don’t be afraid to break convention and add a little ice and a bit of orange peel to accentuate the fruity character,” comments Danny Dyer, Grant’s Global Brand Ambassador.  “It’s a blended scotch whisky to be enjoyed many ways.”

Taste:  Vanilla, honey, and spice. All mixed together for a rich, sweet flavour. Aged grains and peated malt add depth.

Finish: Long soothing and warm, a feeling you won’t want to rush.

Grant’s Triple Wood 12, winner of the Gold medal at ISC 2021 & 2020 and world’s best blended scotch whisky at the IWSC in 2019 (one of the industry’s most prestigious competitions), will be available at select liquor retailers across Canada, starting this holiday season.  With its distinctive premium black bottle and triangular bottle design, this makes both a magnificent gift this holiday season and an ideal dram or cocktail to enjoy on those special occasions together, all year round.

“Grant’s Triple Wood 12 is also great in a long, refreshing drink like a Grant’s & Soda, which I serve with fresh orange and a touch of local honey,” adds Dyer.  “The honey and orange work together to give that fruity sweet zing and complements the flavours of our whisky perfectly. I’m excited to share our newest innovation to Canadians of legal drinking age coast to coast!”

Other liquids from the Grant’s Family available in Canada include Grant’s Triple Wood and Grant’s Sherry Cask 8-Year-Old, each providing an array of distinctive flavour profiles to delight consumers, and available in select provinces at fine retailers.

Six generations of Grants have stood together through thick and thin to hold the title of Scotland’s oldest continuously family-run blended whisky makers. Making Grant’s is a true team effort, as it takes 198 pairs of hands to take the whisky from grain to glass. Grant’s remains the only blended whisky producer to have its own Stillman (The Maker), Cooper (The Muscle), and master blender (The Master) working together in one location. Three is the magic number for Grant’s Triple Wood, as three wooden barrels and three key people make this special blend truly something unique.  www.grantswhisky.com Distributed by PMA Canada www.pmacanada.com For information about Grant’s globally, please visit www.grantswhisky.com.

William Grant & Sons, Ltd. is an independent family-owned distiller headquartered in the United Kingdom and founded by William Grant in 1887. Today, the luxury spirits company is run by the fifth generation of his family and distills some of the world’s leading brands of Scotch whisky, including the world’s most awarded single malt Glenfiddich®, The Balvenie® range of handcrafted single malts, small-batch, handcrafted Hendrick’s® Gin and the world’s third largest

Starbucks Ushers in the Season of Giving