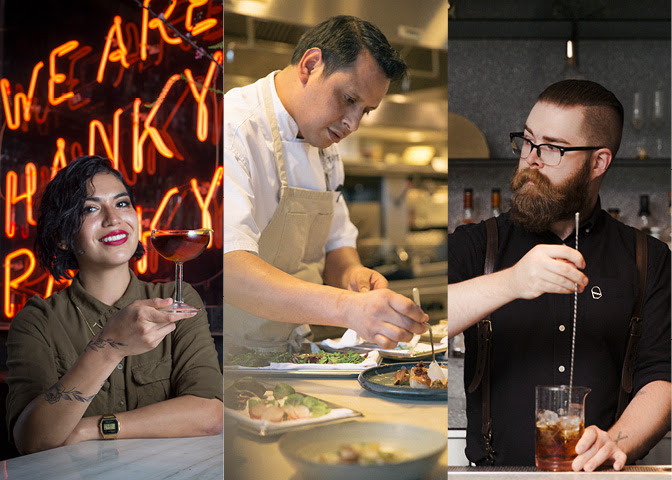 “Día de los Muertos is a holiday that centers on gathering with loved ones to remember family and friends that have passed by sharing food and memories,” says Chef Laguna, who grew up cooking on his family farm in rural Mexico. “Every year, I would spend days beforehand preparing with my mother and grandmother, gathering ingredients from various local markets. This collaboration with Hanky Panky is very dear to my heart, as I’m able to share these sacred traditions with our Botanist family and community, uniquely connecting my Mexican roots to the modern gastronomy that guests have come to expect from our menus.”

Following the two-night tasting menu experience at Botanist, on November 4, the distinguished cocktail connoisseurs of Hanky Panky will team up with Fairmont Pacific Rim’s Creative Beverage Director, Grant Sceney, to offer a cocktail-forward experience at The Lobby Lounge & RawBar. The theme of the evening will continue in the spirit of Día de los Muertos, for a one-of-a-kind celebration featuring live music and entertainment.

This collaboration marks Fairmont Pacific Rim’s third of the year in an ongoing series into 2023, which aims to provide unrivaled, immersive culinary experiences in partnership with renowned restaurants and bars from around the world for valued guests and the Vancouver community. In March 2022, Botanist and The Lobby Lounge & RawBar hosted Katana Kitten, recently named #4 on North America’s 50 Best Bars list. In August, the property welcomed New York City’s SAGA, led by acclaimed culinarian James Kent, and its counterpart cocktail bar, Overstory, which ranked #27 on the list of 50 Best Bars in North America. The collaboration also acts as a continuation of Hanky Panky’s global series of bar takeovers.

“Our global tours have allowed us to connect with other like-minded culinary and cocktail artists like the experienced team at Fairmont Pacific Rim,” says Gina Barbachano. “It is a pleasure to bring the flavours and style of Hanky Panky to Vancouver – and to celebrate with the backdrop of Día de los Muertos only enhances the experience.”

Hanky Panky is a highly regarded leader in the industry. Having secured the No. 13 spot in the World’s 50 Best Bars list in 2022, No. 16 in North America’s 2022 50 Best Bars, as well as number 48 in Top 500 Bars, the Mexican speakeasy bar is dedicated to leading and setting the standard of quality craft and service in Mexico City’s burgeoning cocktail scene. As a one-of-a-kind establishment, each bartender at Hanky Panky is also part owner, investing their time into creating a community amongst themselves, in Mexico City and with cocktail enthusiasts around the world.

“Mexico as a country is the embodiment of the celebration of life,” says Jason Cisneros, Fairmont Pacific Rim’s Food & Beverage Director. “My vision for this one-of-a-kind Día de los Muertos celebration is to incorporate these beautiful traditions into every aspect of the food, music, drinks and creative, to pay homage in the most authentic way, all while infusing what the Pacific Rim is synonymous for.”

The tasting menu will be available for dinner service on November 2 and 3 for $225.00 CAD per person. Reservations are now open to the public and can booked online.

Botanist brings a fresh vibrancy to Vancouver’s culinary scene, located in the heart of Coal Harbour inside Fairmont Pacific Rim. Named one of Canada’s 100Best restaurants and listed on the World’s 50Best Discovery list, the inviting restaurant space is inspired by the principles of botany, and transports guests into a world where day blurs into night, summer into winter, and food and drink are plenty. Executive Chef Hector Laguna’s menu represents the botany of British Columbia and celebrates the biodiversity of the Pacific Northwest, where locally sourced ingredients are coupled with contemporary techniques. The restaurant is home to Botanist Bar, recently named #2 Best Bar in Canada, which sits adjacent to a glass-enclosed garden, while the wine program features a terroir-driven wine program that supports small-batch sustainable and biodynamic farming practices.

Named after the potent cocktail concocted by Ada Coleman at The Savoy in London in the early 20th century, Hanky Panky is a speakeasy bar in the heart of Juárez, one of Mexico City’s most emblematic neighborhoods. Launched in 2016 by owner Walter Meyenberg and the leading team Georgina Barbachano and Ismael Martinez, the bar quickly became one of the most acclaimed in the world. Currently number 12 in The World’s 50 Best Bars list 2021; it is also recognized as Disaronno Highest New Entry 2021.

Mom’s the Word on Sunday, May 12 at Fairmont Hotels in BC

FALL IN LOVE WITH FAIRMONT HOTELS IN THE PACIFIC NORTHWEST