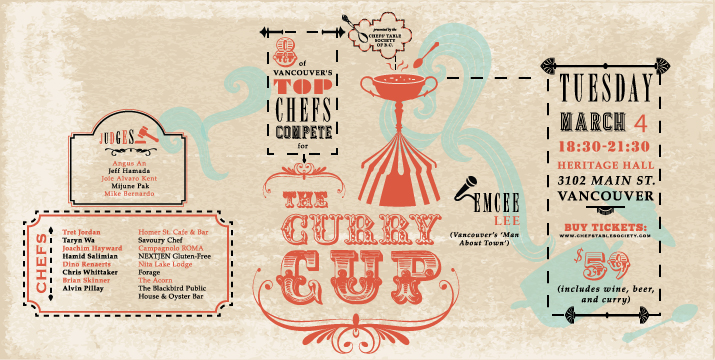 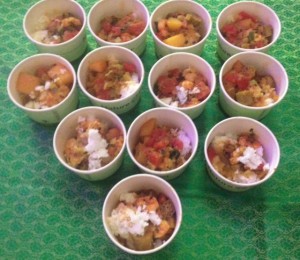 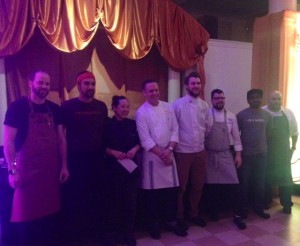 Most curry dishes, as with the 8 curry cups sampled, have a bit of spice to them, which include but are not limited to, cinnamon, ginger, garlic, fenugreek, cardamom, and tamarind. Also, depending on the type of curry, some sauces will include turmeric, coriander, cumin and hot chili peppers, but they can include a variety of other spices as well. Curry dishes come from many different parts of the world such as India, Thailand, Sri Lanka, Malaysia and Indonesia, for instance. In addition, these fragrant dishes can be either meat-based or vegetarian and are accompanied with either some flatbread (for example, naan or roti) or rice.

The venue set-up enabled guests to go from one curry station, watch how the curry dishes were being made, and sample each type of curry which was served in an environmentally-friendly cup. Instead of sampling each of the dishes in order or at least working on sampling what was on one side before moving along to the other, I zigzagged from station to station, stopping over for a different glass of wine each time: My ultimate goal of the evening was to master the art of wine and curry pairing.

After sampling almost all the wines being poured, I came to the conclusion that there was no perfect pairing but white wines that work against the spice was the way to go. I had a chance to speak with Mike Bernando, Sommelier and Director of Operations/Wine Director at Vij’s and he conveyed that one of his recommended combinations was pairing curry with champagne. “It has high acidity, cuts through the spice, and is also acts as a palate cleanser”, he expressed. As I probed to get some more suggestions on other whites he added: “Gewürztraminers from the New World wine regions, or even bright Sauvignon Blancs with racy acidity and richness are also great ones”. With so many options to choose from that evening, I made a list of the wine pairings that married well with the each of the wonderful curry cups that evening. 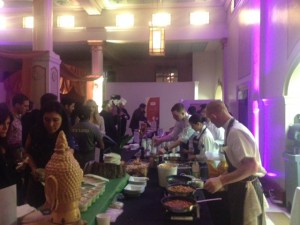 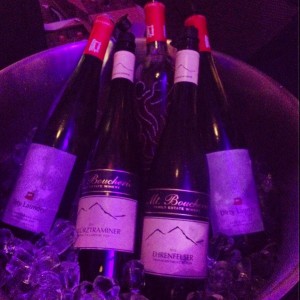 Curry Cups served by each of the Competing Chefs

What was interesting about this competition was that while the chefs were reputable for their passion for food and culinary skills none were actually had cooking curry as a speciality. In the celebration of spice and winter blues, the idea behind the event was to create a space for local chefs to participate in a healthy curry competition for everyone to enjoy.

The winner of the Curry Cup competition was selected by a panel of judges which included Angus An (chef/owner of Longtail and Maenam restaurants), Jeff Hamada (Japanese Canadian artist/creator of Boooooom), Joie Alvaro Kent (food writer and restaurant award judge), Mijune Pak (founder of Follow Me Foodie and food columnist for the WE Vancouver) and Mike Bernardo (Director of Operations/Wine Director at Vij’s). 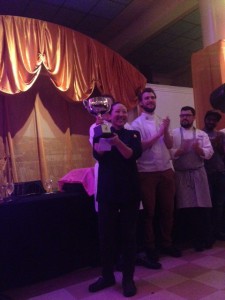 Amongst the talented chefs that participated, Taryn Wa, of Savoury Chef won the 2014 People’s Choice award which guests voted for as well the the Curry Cup competition! All proceeds from the Curry Cup were given back to the Chefs’ Table Society of B.C. to support their various scholarships and charitable partners including Growing Chefs – Chefs for Children’s Urban Agriculture, who were presented with a cheque at the end of the evening.

HIT THE DECK: BELLS AND WHISTLES SPRINGS INTO PATIO SEASON WITH NEW FOOD AND DRINK SELECTIONS, ‘DIP INTO SUMMER’ PARTY