Harbinger. An omen, foreshadowing, sign of things to come.  The word came coming to mind as we sat in Spokane’s Nectar Tasting Room on a Saturday afternoon, enjoying a glass of very nice Northwest Cellars wine after a tasting of seven reds, served by the winery owner himself, Bob Delf.

We love Nectar. It’s a lovely space and a very clever concept. And, with changes to the BC Liquor Act coming, it isn’t much of a stretch to imagine the same idea coming to our own province in the near future. Spring had finally sprung and, after what seemed like a really long winter, a harbinger of change was a welcome feeling.

You see, Nectar is a wine tasting room operated by five Washington wineries, all from different areas in the state. They share the operating costs and make wines available for tasting and sales. Occasionally, as on our most recent visit, winemaker/owners are in attendance.

For our tasting, Delf invited us to sample any six of the nine wines he had open, at a $5 cost, waived with the purchase of a bottle. We bypassed the three whites to focus on six reds he had set out. Later, as we chatted, he insisted we try a seventh wine, which he doesn’t generally pour for the public.

At Northwest Cellars, located in Kirkland, a couple hours drive south of Vancouver on the I-5, Delf (a Vancouver transplant) makes wine with the help of two winemakers, using grapes from several areas, including the amazing Horse Heaven Hills. A not so common twist at Northwest Cellars is the opportunity to purchase wine and have it bottled with a custom label. This obviously has an appeal to the corporate world, and doesn’t seem as such a surprise when we learn that Delf was once a software company CEO.

The wines we sampled were, in a nutshell, mighty fine. Another cool twist came when, with each new sample poured, Delf set a business card in front of us, each serving as a miniature data sheet. A wine writer’s dream, I thought as I pocketed my collection before leaving. 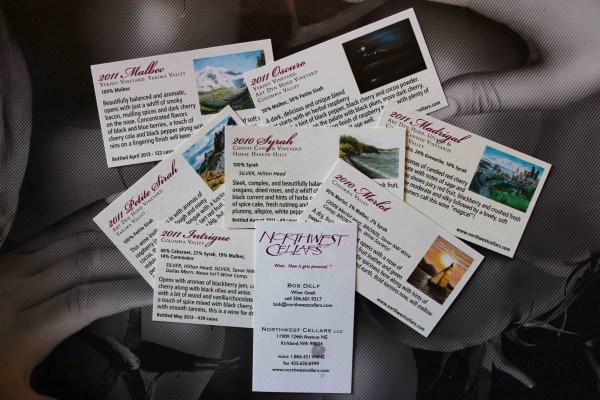 •2011 Malbec: Nicely balanced with classic dark berry and pepper, and enough smoke to make me think this would be a great campfire wine.

•2011 Petite Sirah: An unusual grape for single varietal wine, Petite Sirah is a cross of Syrah and Peloursin vines. It originated in France but is no longer grown there. Great aromatics and nice mouth feel. Lots of fruit and an early hint of white pepper.

•2010 Merlot: Dryer than most versions with nice fruit and spices beneath a strong tannic structure.

•2010 Syrah: Who doesn’t love Syrahs made from grapes grown in Horse Heaven Hills? Complex and spicy, this version is the real deal.

•2011 Intrigue: A blend of 40% Cabernet Sauvignon, 27% Syrah, 19% Malbec and 14% Carmenere, Intrigue is aptly named. Lots going on this wine, with an unexpected smoothness that makes it inviting with or without food.

•2011 Oscuro: The one Delf doesn’t always put out to taste, probably because of its $44 list price. Equal parts of 50% Malbec and 50% Petite Sirah, this is one I couldn’t resist bringing home. Great aging potential with dark flavours—black pepper, cherry, cocoa. If I had to wear a tuxedo I’d want a glass of Oscuro in my hand.

On other visits to Nectar we have sampled wines from each of the other participating wineries—Anelare Winery (Benton City), Hard Row to Hoe Vineyards (Chelan. The brand, interestingly, is created by none other than Vancouver’s Bernie Hadley-Beauregard.), Skylite Cellars (Walla Walla) and Terra Blanca Winery (Benton City).  Very fine wineries, each and every one.

We walked out of Nectar Tasting Room with a couple of bottles, ruing, as always, the insane liquor import duties one pays for bringing back anything over the two bottle per person limit for our 48-hour stay. But it was fun to think that there could be a day when we wander the streets of Kelowna or Granville Island or Gastown and come across tasting rooms shared by multiple wineries. Who wouldn’t be lured by the promise of a selection of wines from the Naramata Bench Winery Association, the Westside Wine Trail, Vancouver Island, the Shuswap area….well, you get the idea. I can hardly wait.

The Revival Group Celebrates a Winning Three-Peat in Downtown Kelowna

Doing Good by Dining Out