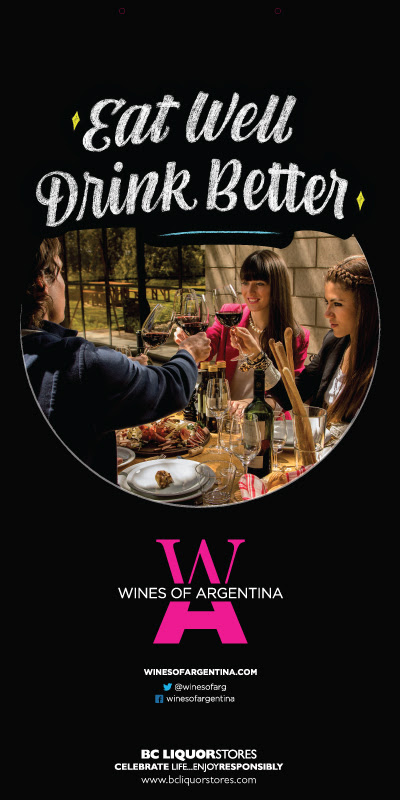 During the month of July, the consistent quality and amazing value of wines from Argentina will be highlighted at 60 select BC Liquor Stores throughout the province. One of the highlights of the month will be FREE consumer tastings at the 39th & Cambie Signature Store on Thursday July 7 and Thursday July 14, 2016. The wines will be complemented by traditional empanadas prepared by Panaderia Latina Bakery.

Wine lovers will also have an opportunity to explore the diversity of Argentine wines at free three-day tastings offered at other participating BC Liquor Stores throughout the month of August.

Plus free tastings throughout July at 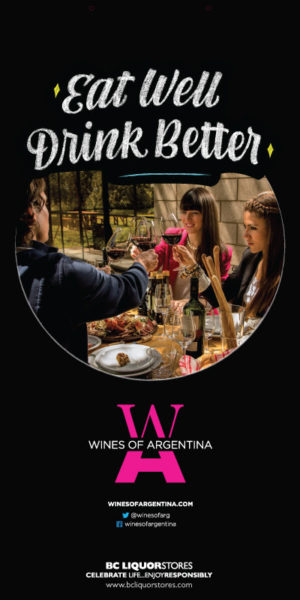 About Wines of Argentina: Wines of Argentina is responsible for the promotion of the brand VINO ARGENTINO around the world. Since 1993, this organization has been promoting the image of local wines abroad and providing advice on export strategies for Argentina by studying and analyzing trends in consumer markets. Its aim is to contribute to the consolidation of Argentina as one of the main wine exporting countries in the world and to the global success of the Argentine wine industry by enhancing its positive image in the wine trade, among opinion leaders and consumers.

About Panaderia Latina Bakery: Located in Vancouver’s Collingwood neighbourhood, family-run Panaderia Latina Bakery is a meeting place for the savoury and the sweet.  The café’s walls are lined with jars and tins of traditional South American ingredients such as peppers, tomatoes, and chilis, and lunch favourites include freshly baked empanadas and authentic chacareros (hot beef sandwiches).  Panaderia is also a dream come true for anyone with a sweet tooth, as display cases are stacked with eye-catching and aromatic dessert options including Dulce le leche, Milhojas, and Torta Hojaldra.  Everything is made fresh on-site, and served by friendly staff who are eager to share their love for the Bakery’s South American cuisine.