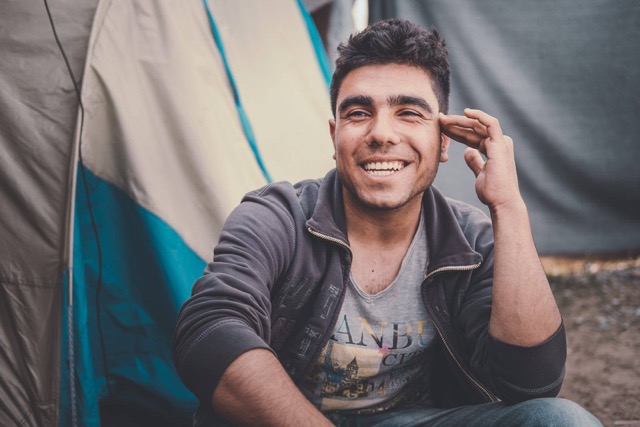 The Syrian Conflict Through the Eyes of a Young Syrian Photographer

Witness the devastating effects of the war in Syria through the eyes of a young Syrian refugee, Abdulazez Dukhan. This 18 year old photographer from Homs, Syria depicts the tragedy and violence he has experienced through breathtaking photographs. With his work, Abdulazez aims to give voice to people who are silenced and asks his audience to feel the situation in which he and so many people in Syria find themselves. While his photographs highlight the devastation, suffering, and destruction of so many dreams, they also try to give hope to his people and show that beauty can still prevail.

AbdulAzez says: “You cannot understand things from just listening, you have to see them with your eyes and then you will believe it. I hope that my artwork will reach some people who have a voice, so that the struggle of my people is not forgotten. My people have a lot of dreams, but sometimes it feels like no one cares. I was dreaming in the beginning to have an office and to make posters for movies but now, I just dream of shouting through my artwork and telling the whole world about us. My artwork keeps me motivated. When I die, the people will have something to remember me by.”

Accompanying Abudlazez’s photographs will be images from American photographer, Jeremy Oversier. In April 2016, Jeremy spent time documenting the medical efforts of Global Outreach Doctors inside the al Za’atari refugee camp in Jordan. He wanted to help people see the situation, the lives, and the faces of the people who have been displaced by the Syrian Civil War. As a photographer, showing the faces and places of people in need is of great importance to him.

Cost: By Donation (Proceeds will go to helping Abdulazez continue his photography)

Opening night, September 29th, we will be Skyping Abdulazez in Greece in order to have an interactive conversation between him and the audience. There will also be a discussion panel with a recently arrived Syrian refugee and a member of the Canadian Syrian Council.  On Friday, September 30th, the show will be accessible all day, and the evening will feature speakers.

Abdulazez Dukhan: As an artist and a refugee, 18 year old Abdulazez defines his role as translating the ideas from inside the mind to the outside world. When the revolution broke out in Syria, his family fled to the countryside and then to Turkey. While waiting a year in Turkey to make the crossing to Greece, he taught himself photography and Photoshop as well as English.  On February 26th, 2016, he and his family arrived in Idomeni, Greece in the hopes of crossing into Macedonia. Due to the border closures, they found themselves in a camp of thousands facing an indefinite number of empty days – no school, no work, nothing. Despite crossing mountains, surviving scenes of violence, and running from war-torn countries, Abdulazez remains hopeful. When asked about his perspective, he responds, “We keep smiling because we love life and enjoy being positive more than being negative.”

Jeremy Oversier: Jeremy was born on an Amish farm in rural Pennsylvania in 1984. When he was 12 his mother gave him his first camera and copies of Ansel Adams’ books, The Camera, The Negative, and The Print.  He read them cover to cover like novels over and over again.  In 2010, he moved to Los Angeles and started working for the luminary fashion and celebrity photographer, Douglas Kirkland.  Today he intends to use the camera as a means of healing both himself and the world around him.

Professional portraits, food, and a stunning view at Spotlight!