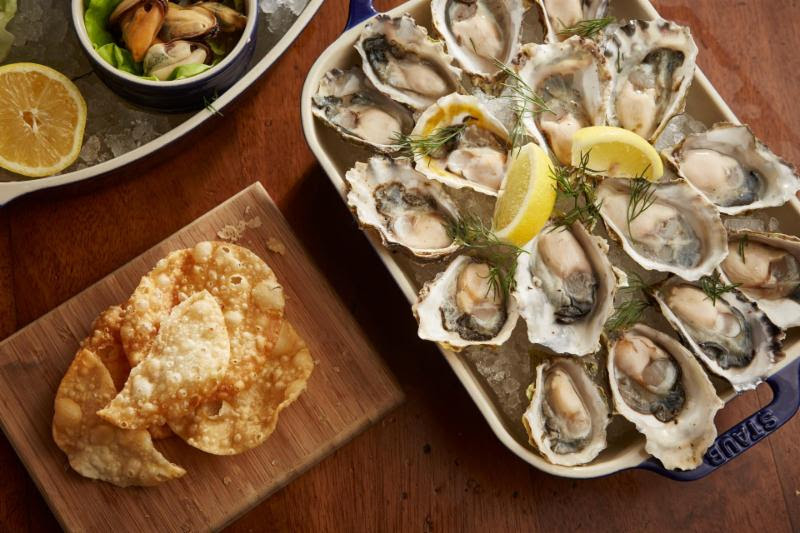 Picture a tasty afternoon of sipping, shucking and learning with industry experts at a casual long table event at Four Seasons Hotel Vancouver‘s YEW seafood + bar. Rus Yessenov & Bacardi Ambassador, Kevin Brownlee
host Vive Le Vodka! on March 17th from 2pm to 4pm and includes: vodka tasting, oyster shucking lesson, martini and oyster pairing as well as a sneak preview of YEW’s soon-to-launch cocktail program paired with small plates.
Why now?
It’s in the colder months of the year when oysters are at their best. As spring approaches and temperatures rise, there are few things as satisfying as freshly shucked oysters and an ice cold Grey Goose martini, however you take it.
Why Vodka? Why the Pair?
There is a delicacy with oysters than can only really be tended to with spirits that maintain a balance between being strong and elegant, yet assertive and refreshing. This is exactly where vodka holds court. A briny, dirty martini elevates the lovely saltiness of an oyster. The delicate notes of citrus and hints of almond in Grey Goose work well with the creamy textured nuances of oysters; and a zested lemon over the top of a martini highlights these flavour components perfectly. A smoky rinse of that martini plays wonders to the tune of an oyster’s mineral notes.
Then there’s the added element and delight that is Fino sherry in a martini, which immediately transports its’ sippers across the ocean to the shores of Portugal, where life is about simplistic beauty.
Tickets are $85 and can be bought here.
About Kevin Brownlee
As Bacardi’s new Portfolio Ambassador for BC, Brownlee works closely within the great community of restaurants and bars in Vancouver. Ripe with talented professionals, passionate and well-educated patrons, Brownlee has had the good fortunate to work with the forward thinking team at AnnaLena where Brownlee completed in multiple competitions and won both the regional and national title at Grey Goose’s Pourmaster competition (2015), Hennessy’s Remixed regional competition, the Vancouver Club Celebrity Bartender (2015) and more.
Brownlee is also a member of the Canadian Professional Bartender’s Association and is also a former schoolteacher. The affable mixologist stands by the importance of imparting knowledge with others, advocacy for all things socially equitably and equal, preferably during conversations over a well-made drink.
About Four Seasons Hotel Vancouver:
As the world’s leading operator of luxury hotels, Four Seasons Hotels and Resorts currently manage 109 properties in 46 countries.Open since 1976, Four Seasons Hotel Vancouver provides a preferred address for both business and leisure travelers, and the highly personalized, anticipatory service that Four Seasons guests expect and value around the world.Recent awards and honours include Condé Nast Gold List and Food & Wines World’s Best Places to Eat.Information on the company and on Four Seasons Hotel Vancouver can be accessed through the Four Seasons website at www.fourseasons.com.
For more information on Four Seasons Hotel Vancouver, please visit the website
and follow us visit us on Facebook, Twitter, Instagram, Pinterest and Google+.